New Approaches to the Age of Saturn’s Moons

The presence of the always intriguing Titan brings into sharper focus recent work on the age of the moons of Saturn conducted by Samuel Bell (Planetary Science Institute). Given the active weathering visible on Titan, the assumption that it is at least four billion years old, which draws on earlier work on the age of Saturn’s moon system, is challenged by the lakes, mountains, riverbeds and dunes we see in the Cassini data. Bell argues that an older Titan would have to be one with an extremely low erosion rate and minimal resurfacing.

But maybe Titan is younger than we’ve thought. Bell assembles the context of Titan in the overall system at Saturn by studying the cratering rate on the various moons. Determining the age of a planetary surface — think Mars or the Moon — is generally done by counting the impact craters and weighing this against the cratering rate. At Saturn, the problem is that the cratering rate is not known. It would be one value if, as previous work has assumed, the craters on the Saturnian moons all came from objects orbiting the Sun. Bell wondered if this was true:

“If the impacts came solely from Sun-orbiting objects, the relative cratering rate would be much, much higher the closer the moons are to Saturn. However, the crater densities of the oldest surfaces of Mimas, Tethys, Dione, Rhea, and Iapetus are all relatively similar. It would be too much of a coincidence for the ages of the oldest surfaces on each moon to vary by the exact amounts necessary to produce broadly similar crater densities. As a result, it seems much likelier that the impactors actually come from objects orbiting Saturn itself, moonlets that would be too small to detect with current technology.” 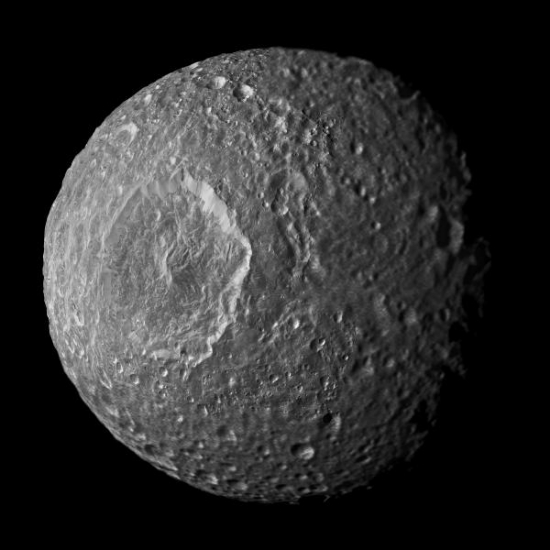 A new chronology emerges if we accept this model. Saturn-orbiting impactors allow a younger age to be calculated, one that, for Titan, more clearly squares with the Cassini data.

Relative Crater Scaling Between the Major Moons of Saturn: Implications for Planetocentric Cratering and the Surface Age of Titan https://t.co/nsup2gYqUZ I think most impactors come from debris orbiting Saturn. Under this theory, Titan is probably younger than the other moons. pic.twitter.com/v4cTwtfS5R

Bell is clear about the factors of system age that we have yet to explain, and acknowledges than an older Titan is still possible. From the paper:

I… prefer a model of dominantly planetocentric cratering, with an impactor production function that probably does not vary by more than a factor of ~5 between Mimas and Iapetus. This planetocentric cratering model makes the young moons hypothesis possible and implies that the cratered plains of Mimas, Tethys, Dione, Rhea, and Iapetus are of broadly similar age. Under this model, the surface of Titan is definitely younger than the cratered plains of Rhea and Iapetus, and it could easily be much, much younger. However, due to lack of constraints on the planetocentric cratering rate and how it varies with time, the planetocentric model provides very limited constraints in terms of
absolute age. While it suggests a vigorously resurfaced Titan with a young surface, the model cannot rule out a surface of Titan that dates back to the early solar system, a very old surface with a very slow erosion rate and negligible endogenic resurfacing.

I bring all this up this morning to add context to a 2019 paper on Saturn’s moons from Marc Neveu (NASA GSFC) and Alyssa Rhoden (Southwest Research Institute). In “Evolution of Saturn’s Mid-sized Moons,” the duo make the case that the orbits of Mimas, Enceladus, Tethys, Dione and Rhea are hard to square with their geology. From their paper:

The moons’ ages are debated. Their crater distributions, assuming Sun-orbiting impactors extrapolated from present-day observed small-body populations, suggest surfaces billions of years old. Conversely, the measured fast expansion of their orbits, probably due to tides raised by the moons on Saturn, indicates— assuming dissipation levels that are constant over both time and frequency of tidal excitation—that this relatively compact moon system is less than a billion years old. This could explain why some moons may not have encountered predicted orbital resonances, and supports scenarios of non-primordial formation from debris of the tidal or collisional disruption of progenitor moons.

The scientists have run numerical simulations coupling geophysical and orbital evolution over a 4.5 billion year period, with the orbits expanding with time through tidal effects. For the overview, let me just quote the abstract below, as I’m short on time this morning. But notice the ramifications of system age for another interesting moon, Enceladus:

Dissipation within the moons decreases their eccentricities, which are episodically increased by moon−moon interactions, causing past or present oceans to exist in the interiors of Enceladus, Dione and Tethys. In contrast, Mimas’s proximity to Saturn’s rings generates interactions that cause such rapid orbital expansion that Mimas must have formed only 0.1−1 billion years ago if it postdates the rings. The resulting lack of radionuclides keeps it geologically inactive. These simulations explain the Mimas−Enceladus dichotomy, reconcile the moons’ orbital properties and geological diversity, and self-consistently produce a recent ocean on Enceladus.

But back to Samuel Bell, who is clearly right about how meager our knowledge of the evolution of this system of moons really is:

“With the new chronology, we can much more accurately quantify what we do and don’t know about the ages of the moons and the features on them. The grand scale history of the Saturn system still hides many mysteries, but it is beginning to come into focus.”

The paper is Bell, “Relative Crater Scaling Between the Major Moons of Saturn: Implications for Planetocentric Cratering and the Surface Age of Titan,” Journal of Geophysical Research Planets 26 May 2020 (abstract). The Neveu and Rhoden paper is “Evolution of Saturn’s mid-sized moons,” Nature Astronomy 3 (1 April 2019), 543-552 (abstract).

Previous post: The Technological Indispensability Hypothesis: An Addendum to ‘Bound in Shallows’