WASP-189b: An Impressive Debut for CHEOPS

The European Space Agency’s CHaracterising ExOPlanet Satellite (CHEOPS) space telescope reached space in December of 2019, achieving a Sun-synchronous orbit some 700 kilometers up. The instrument has begun its observations of stars near the Sun that are already known to have planetary companions. The idea is to use the 30 cm optical telescope to constrain radius information for these worlds, previously identified in transit and radial velocity studies.

Transiting planets are particularly useful here, because tightening up their radius measurements means we get a better idea of their density, factoring in mass estimates provided by subsequent radial velocity follow-ups. It’s great to see the instrument already hard at work, with measurements of the giant planet WASP-189b, some 325 light years from the Sun, showing us a world that is one of the hottest known, with a likely temperature around 3400℃. By comparison, the surface temperature of the Sun is about 6000 ℃, while smaller M dwarfs can have temperatures below that of this incendiary planet. A planet hotter than some main sequence stars. 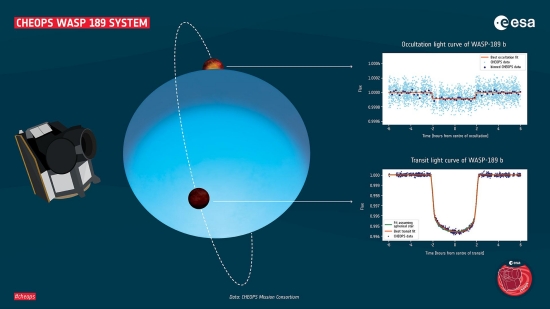 Image: CHEOPS observations of WASP-189b in front of and behind its star. Credit: ESA.

First detected in 2018, WASP-189b turns out to have an equatorial diameter of about 220,000 kilometres, making it 1.6 times larger than Jupiter, a figure 15% higher than previous estimates. Also noteworthy is its highly inclined orbit, which moves close to the poles of the star and is detected by studying both transit and occultation (as the planet moves behind the star). At 7.5 million kilometers, WASP-189b is 20 times closer to its primary than Earth, completing a revolution in a scant 2.7 days. Monika Lendl (University of Geneva), is lead author of the paper on this work:

“Because the exoplanet WASP-189b is so close to its star, its dayside is so bright that we can even measure the ‘missing’ light when the planet passes behind its star; this is called an occultation. We have observed several such occultations of WASP-189b with CHEOPS. It appears that the planet does not reflect a lot of starlight. Instead, most of the starlight gets absorbed by the planet, heating it up and making it shine.”

The A-class host star is itself notable, an object that rotates fast enough to deform itself, with an equatorial radius greater than the polar radius, so that it is cooler at the equator than at the poles. The poles thus appear brighter in the CHEOPS data because of this asymmetry, an effect that the authors are able to use to determine the spin-orbit angle of the planet. Needless to say, the planet’s highly inclined orbit raises questions abouts its formation, given that we would expect both star and planet to have developed from a common disk of gas and dust. Past gravitational interactions are likely the cause, forcing the planet to migrate inward.

WASP-189 b is one of the most highly irradiated planets known thus far, with a dayside equilibrium temperature of ∼ 3400 K (Anderson et al. 2018). It orbits an early-type star similarly to the extreme object KELT-9b (Gaudi et al. 2017), but with a longer orbital period of 2.7 days, placing it closer, in temperature, to ultra-short period planets orbiting F and G stars. As such, this object allows us to comparatively probe the impact of different stellar spectral energy distributions and, in particular, strong short wavelength irradiation on planetary atmospheres. As it is orbiting around an A-type star, the system is also relatively young (730 ± 130 Myr, see Section 2.2), providing us with a window into the atmospheric evolution of close-in gas giants.

So CHEOPS has given us a tighter look at WASP-189b, obviously useful information, but what this paper really demonstrates is the power of the space observatory at detecting extremely shallow signals, as is necessary to gauge brightness variations between pole and equator in stars like the primary here. From this we learn about the planet’s unusual polar orbit. We can look forward to measurements of much cooler planets at similar high levels of precision. The best-case scenarios, discussed in the paper, will be objects for which CHEOPS can make phase curve studies that reveal information on the distribution of clouds in planetary atmospheres The resulting transit and occultation catalog will be large and instructive. 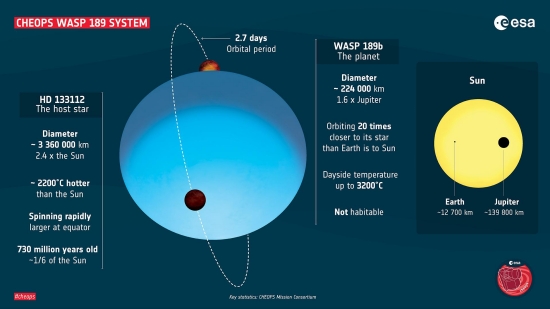 Image: CHEOPS results of the observation of WASP-189b. Credit: ESA.

The paper is Lendl et al., “The hot dayside and asymmetric transit of WASP-189 b seen by CHEOPS,” in process at Astronomy & Astrophysics (abstract / preprint).

Previous post: New Approaches to the Age of Saturn’s Moons