Cometary Alignments and the Galactic Tide

A second ecliptic? What an interesting notion, referred to in a new paper from Arika Higuchi as an ‘empty ecliptic,’ constituting a second alignment plane for the Solar System. This is lively stuff, examined in a new paper in the Astronomical Journal that focuses on the aphelia of long-period comets, the points where they are farthest from the Sun in their orbit. The solutions arrived at through the paper’s dense mathematics show that the aphelia fall close to one or the other of the ecliptic planes, and offer insights into comet formation.

Higuchi (University of Occupational and Environmental Health, Japan) has previously been a part of the National Astronomical Observatory of Japan’s RISE project, RISE standing for Research of Interior Structure and Evolution of solar system bodies. Her work on the orbital evolution of planetesimals goes back at least to 2007 in a paper on the formation of the Oort Cloud, considering the effects of interactions with the ‘galactic tide,’ a reference to the influence of the gravitational field of the galaxy on Solar System objects analyzed through the equations governing orbital motion. The new paper is an extension of the 2007 work, one that derives “the analytical solutions to the Galactic longitude and latitude of the direction of aphelion.”

We know that long-period comets are not confined to the ecliptic, but models of the Solar System’s formation suggest that they formed on the ecliptic and were subsequently scattered through gravitational interactions into the orbits we see today. What Higuchi finds is that even given scattering interactions with the gas giant planets, the cometary aphelia should remain near the ecliptic. That they do not necessarily do so calls for an explanation that the author finds in the influence of the Milky Way’s gravitational field. It turns out that the aphelia of long-period comets, when this influence is taken into account, tend to collect around two planes.

The first is, as you would expect, the ecliptic with which we are all familiar. The second is the ‘empty ecliptic,’ a plane inclined with respect to the disk of the Milky Way by about 60 degrees, just as the ecliptic itself is inclined by 60 degrees, but in the opposite direction. Here we’re cautioned to be careful with the label, because the empty ecliptic is ‘empty’ only in the early days of the system. Over time, it comes to be populated with scattered comets, a population that has implications for how we go about finding long-period comets in the future.

In the passage from the paper that follows, L and B refer to the galactic longitude and latitude of the direction of aphelion. q refers to the perihelion distance, while i refers to inclination with respect to the ecliptic plane:

The concentration of long-period comets from the Oort cloud on the ecliptic and empty ecliptic planes is an observational evidence that the Oort cloud comets were planetesimals initially on the ecliptic plane. We expect the concentrations even when we consider the effect of passing stars. Perturbations from passing stars change the conserved quantities and may break the relation between q, B, and L more or less; however, it takes a much longer time to change the eccentricity vector (i.e., L and B) than to change i (Higuchi & Kokubo 2015). Therefore, we suggest that observers, including the space mission Comet Interceptor, focus on the ecliptic plane and/or the empty ecliptic plane to find dynamically new comets. 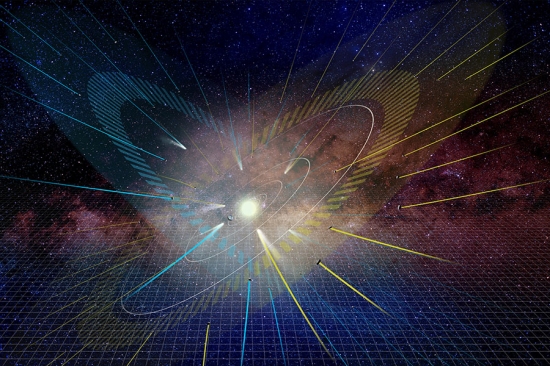 Image: Artist’s impression of the distribution of long-period comets. The converging lines represent the paths of the comets. The ecliptic plane is shown in yellow and the empty ecliptic is shown in blue. The background grid represents the plane of the Galactic disk. (Credit: NAOJ).

Higuchi cross-checked her mathematical results against numerical computations run largely at NAOJ’s PC Cluster at the Center for Computational Astrophysics. She is able to show that the analytical and computational results she derives square with the data for long-period comets listed in NASA’s Small Body Database at JPL, identifying the two peaks expected near the ecliptic and the empty ecliptic. This favors the hypothesis that long-period comets originally formed on the ecliptic. We can use upcoming surveys to refine these results. Says the author:

“The sharp peaks are not exactly at the ecliptic or empty ecliptic planes, but near them. An investigation of the distribution of observed small bodies has to include many factors. Detailed examination of the distribution of long-period comets will be our future work. The all-sky survey project known as the Legacy Survey of Space and Time (LSST) will provide valuable information for this study.”

What an interesting result. We consider long-period comets from the Oort Cloud as forming on the ecliptic plane just as the planets did, but now we move to the view that their orbital evolution must be examined not just in terms of interactions with large objects in the early system, but also with the gravitational tide of the galaxy. You’ll recall that the aphelia of various objects in the Solar System have been considered in terms of possible perturbers within the system, including hitherto undiscovered planets. Their potential for unlocking long-period comet distribution in useful ways is one I had never considered until I ran into Higuchi’s work this morning.

The paper is Higuchi, “Anisotropy of Long-period Comets Explained by Their Formation Process,” Astronomical Journal Vol. 160, No. 3 (26 August 2020). Abstract / preprint. The 2007 paper is Higuchi et al., “Orbital Evolution of Planetesimals due to the Galactic Tide: Formation of the Comet Cloud,” Astronomical Journal Vol. 134, No. 4 (29 August 2020). Abstract.

Next post: Dark Skies: Space Expansionism, Planetary Geopolitics, and the Ends of Humanity: A Review