The Best of All Possible Worlds

I’ve always loved the notion of ‘superhabitability,’ which forces us to ask whether, in our search for planets like the Earth, we may in our anthropocentric way be assuming that our own planet is a kind of ideal. Some scientists have been asking for years whether it is possible that the Earth is not as ‘habitable’ as it might be (see What Makes a Planet ‘Superhabitable’?). The question then becomes: What factors would make a planet a better place for life than our own?

Now Dirk Schulze-Makuch (Washington State University), working with René Heller (Max Planck Institute for Solar System Research, Göttingen) and Edward Guinan (Villanova University) runs through the characteristics of superhabitability, which take in planets that are a bit warmer than ours, a bit larger, and somewhat wetter, not to mention those that circle stars that live longer than our G-class Sun. 24 interesting planets emerge, all more than 100 light years out, but none of those so far identified meet all the specifications for superhabitability enumerated in the paper, nor could they, given the limitations on our current observing methods.

As we dig into this, let’s first remember the significance of target selection as we continue to refine our telescopes. With interesting new resources coming, space observatories like the James Webb Space Telescope and the European Space Agency’s PLATO, we will delve ever more deeply into exoplanet atmospheres.The goal here is to consider the star systems we will want to investigate as we learn how habitability works and how it might be improved upon. Choosing the list carefully is paramount, for time on these observatories will be precious.

We’ve talked before about the virtues of K-class stars, which are less massive and less luminous than the Sun, while also offering a more capacious lifetime, at minimum twice that of a typical G-class star, and in some cases quite a bit longer than that. Given that life on Earth will likely be rendered impossible within a billion years or so due to changes on the Sun, how much more useful to have tens of billions of years longer to allow life to grow and advance. Various other factors likewise come into play, among them a planet’s geothermal heat and magnetic field. The paper runs through the possibilities (and you might also want to have a look at Orange Dwarfs: ‘Goldilocks’ Stars for Life?, which contains several further citations). From the paper:

…studies of solar proxies of our Sun have shown that young dG [dwarfs of spectral class G] stars rotate > 10 times faster than dG stars near the age of our Sun, and have correspondingly high levels of magnetic dynamo-driven activity and very intense coronal X-ray and chromospheric FUV emissions (Guinan et al., 2005), which makes the origin and early evolution of life challenging. Heller and Armstrong (2014) argued that the increased life span of stars with masses lower than one solar mass may allow inhabited planets to build up a higher biodiversity and possibly even a more complex ecosystem…. This argument would lift K- and M-dwarf stars into the realm of superhabitable planet host stars.

But as the authors point out, moving the range of superhabitability into the realm of M-dwarfs is going too far — here we confront problems of tidal locking, flare activity and atmospheric loss due to the proximity of the planet to the star and exposure to a strong stellar wind. Avi Loeb and Manasvi Lingam have also written on the likelihood that K-dwarfs offer the most stable long-lived environment conducive to superhabitability, and it is worth remembering that we have a K-dwarf in the closest stellar system to our own, Centauri B in Alpha Centauri.

What would a superhabitable planet look like? A planet a bit larger than Earth — one with, say, 1.5 times Earth’s mass — would retain internal heating from radioactive decay longer, while the stronger gravity would allow the planet’s atmosphere to be retained for a longer period. A planet between 5 and 8 billion years old seems to be optimum, an age at which geothermal heat and protective magnetic fields persist. Temperature is also an interesting factor:

…higher temperatures than currently existing on Earth seem to be more favorable. The caveat is that the necessary moisture has to be available as well because inland deserts with low biomass and biodiversity are also common on our planet. One example is the early Carboniferous period, which was warmer and wetter (Raymond, 1985; Bardossy, 1994) on our planet than today, with so much biomass produced that we still harvest the organic deposits in the form of coal, oil, and natural gas from it. Thus, a slightly higher temperature, perhaps by 5°C—similar to that of the early Carboniferous time period—would provide more habitable conditions until some optimum is reached. However, this will depend on the biochemistry and physiology of the inhabiting organisms and the amount of water present. 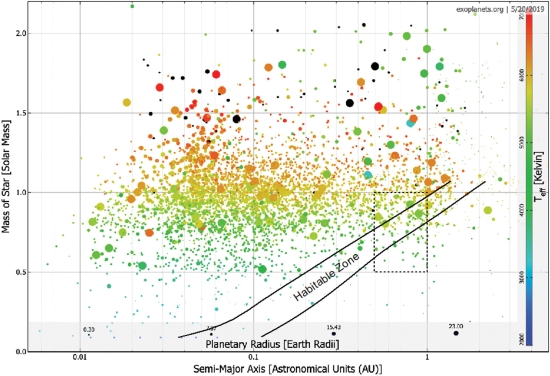 Image: This is Figure 1 from the paper. Caption: Star-planet distances (along the abscissa) and mass of the host star (along the ordinate) of roughly 4500 extrasolar planet and extrasolar planet candidates. The temperatures of the stars are indicated with symbol colors (see color bar). Planetary radii are encoded in the symbol sizes (see size scale at the bottom). The conservative habitable zone, defined by the moist-greenhouse and the maximum greenhouse limits (Kopparapu et al., 2013) is outlined with black solid lines. Stellar luminosities required for the parameterization of these limits were taken from Baraffe et al. (2015) as a function of mass as shown along the ordinate of the diagram. The dashed box refers to the region shown in Fig. 2. Data from exoplanets.org as of May 20, 2019. Color images are available online.

Here is the complete list of factors that lead to superhabitability as listed in the paper. 9 of the 24 planets identified orbit K stars, while 16 of them are between 5 and 8 billion years old. None of these worlds meet all the criteria, in any case. To be fully identified as superhabitable, a planet would meet the following benchmarks:

As I mentioned, none of the planets of interest identified in this paper is known to have all these characteristics, but we have to keep in mind “the uncertainties in our mostly qualitative model and…the uncertainties in the observed parameters” as we examine the list. Moreover, only two of these — Kepler 1126 b and Kepler-69c — have been validated; the others continue to be planet candidates (Kepler Objects of Interest, or KOIs), and some may turn out to be false positives, while one of the confirmed worlds, Kepler-69c is, at almost 2000 light years, too far out to be a promising candidate for JWST, or even possible successors like LUVOIR.

The near-term question arising from this initial cut at superhabitability is whether we can use these criteria to find worlds closer than 100 light years, and thus accessible for high-quality observations from the TESS mission. The list of criteria presented here should help to establish observing priority for any worlds meeting a large number of these standards that can be identified in this distance range, making them high-value targets for investigating biosignatures.

The paper is Schulze-Makuch, Heller & Guinan, “In Search for a Planet Better than Earth: Top Contenders for a Superhabitable World,” Astrobiology 18 September 2020 (full text). The Lingam & Loeb paper is “Physical Constraints on the likelihood of life on exoplanets,” International Journal of Astrobiology Vol. 17, No. 2 (April, 2018), 116-126 (abstract), but see also the same authors’ later paper “Is life most likely around Sun-like stars?,” Journal of Cosmology and Astroparticle Physics Vol. 2018, May 2018 (abstract). Citations to earlier work from René Heller and colleagues on the question of superhabitability can be found in the Centauri Dreams stories I linked to above.