Now and then people mention that our Pioneers and Voyagers made it through the Kuiper Belt on their long journey toward system’s edge, though unfortunately without operational cameras to record what they saw. A missed opportunity? Not really. Think about how long it took to find a Kuiper Belt Object like Arrokoth, the first one ever seen close up thanks to the mighty work of the New Horizons team. Without a major search to find a target, a craft passing through the Kuiper Belt is almost certainly going to encounter no objects whatsoever within range to record the details.

For now, Arrokoth, the object once known as Ultima Thule before running afoul of our times, has to serve as our example of what can emerge in this distant region, and an odd object it is. When its shape is compared to a flattened snowman, as it often is, the real story is in the word ‘flattened.’ How does this roughly 30-kilometer object emerge in the shape it’s in, and under what conditions was it spawned out there in its 298 year orbit around the Sun?

Two connected lobes are involved, as the famous image below makes clear, making this an evident contact binary, where two formerly discrete objects nudged into each other at low velocity. That part of the origin story is easy, and in fact the bi-lobed shape is not unique. We can find it in certain comets as well — consider 67P/Churyumov–Gerasimenko.

But both lobes of Arrokoth are flattened, not just one. A new paper in Nature Astronomy goes to work on the question of how this happened. Ladislav Rezac (Max Planck Institute for Solar System Research), one of the two first authors of the paper, comments:

“We like to think of the Kuiper Belt as a region where time has more or less stood still since the birth of the Solar System. There is as yet no explanation as to how a body as flat as Arrokoth could emerge from this process.”

Exactly so, because four billion kilometers out from the Sun, KBOs should have remained largely unchanged, frozen into their form in ways that give us information about that era. Yet here we have Arrokoth, whose surface seems smooth, uncratered, and again, flat. Is this shape primordial, or are we actually looking at an evolution of a cold classical Kuiper Belt Object that should have formed where we observe it today? 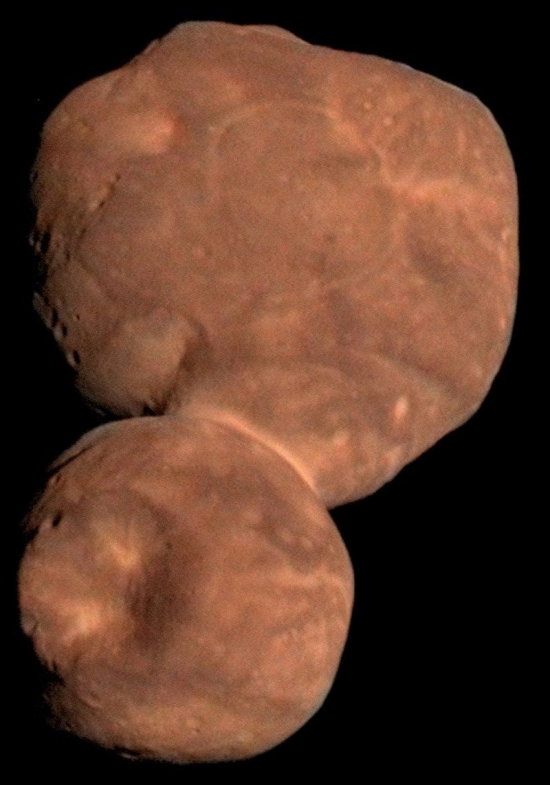 To get from there to here, Rezac and co-author Yuhui Zhao (Purple Mountain Observatory, Chinese Academy of Sciences) ran a ‘mass-loss-driven shape evolution model’ called MONET that suggests a process driving the answer, one developed in another paper earlier this year (citation below).

At the heart of the discussion is Arraokoth’s rotational axis, which is close to alignment with the orbital plane; the obliquity is about 99°. One polar region faces the Sun while the other faces away, while equatorial regions and the lower latitudes are dominated by daily variations in flux. The poles heat and release frozen gases, to produce a loss of mass which, the authors argue, produces the observed flattening over time. Thus “…the polar regions reach higher peak temperatures than the equator, due to the fact that the thermal timescales are longer than the rotational timescales, and the poles experience more sublimation than the equatorial regions.”

We wind up with symmetric erosion between northern and southern hemispheres. The process is thought to have occurred early on, perhaps in 1 to 100 million years, as volatile ices sublimated. The authors assume methane as the driving volatile for the evolution of Arrakoth’s precursor body, but add that N2, CO and CH4 ices all show active sublimation and condensation on large KBOs.

The escape of volatiles early in the formation process would not be particularly surprising, in comparison to what New Horizons found at Pluto, where larger size and stronger gravity allowed the dwarf planet to retain carbon monoxide, nitrogen and methane gases to the present era. Small bodies like Arrokoth would hardly have the gravitational attraction to hold on to these volatiles. Moreover, this may be a common part of the evolution of Kuiper Belt Objects:

This process most likely occurred early in the evolution history of the body, during the presence of supervolatile ices in the near subsurface layers. This could be the dominant process shaping the structure of KBOs if there were no catastrophic collision reshaping the body in their later history. Furthermore, while cold classical KBOs reserve their shape sculptured by early out-gassing, the structure of Centaurs and Jupiter-family comets will be further modified by the same scenario once they enter their current orbit configuration from the Kuiper belt, under sublima- tion of different volatile species. We suggest that this mechanism should be taken into account in models studying planetesimal formation and the shape evolution of KBOs, as well as other small icy bodies in regions where supervolatile ices are expected to be present.

The paper is Zhao, Rezac et al., “Sublimation as an effective mechanism for flattened lobes of (486958) Arrokoth,” Nature Astronomy 5 October 2020 (abstract). The earlier paper referenced above is Zhao et al., “The phenomenon of shape evolution from solar-driven outgassing for analogues of small Kuiper belt objects,” Monthly Notices of the Royal Astronomical Society 492, 5152–5166 (2020). Abstract.