We could use a lot more information about flare activity on M-dwarf stars, which can impact planetary atmospheres and surfaces and thus potential habitability. Thus far much has been said on the subject, but what has been lacking are details about the kinds of flares in question. It’s a serious issue given that, in order to be in the liquid water habitable zone, an M-dwarf planet has to orbit in breathtaking proximity to the host star.

Flares occur through a star’s magnetic field re-connection, which releases radiation across the electromagnetic spectrum. While flares can erode atmospheres and bathe the surface in UV flux, too few flares could actually be detrimental as well, providing as a new paper on the matter suggests, “insufficient surface radiation to power prebiotic chemistry due to the inherent faintness of M-dwarfs in the UV.”

The paper is out of the University of North Carolina, measuring a large sample of superflares in search of a clearer picture of their effect. Flares on the Sun are common enough, as witness the image below, shot in 2012, which shows the kind of coronal mass eruption (CME) associated with stellar flaring. At young M-dwarfs, we can get ‘superflares’ in energy ranges 10 to 1,000 times larger than our Sun provides, bathing a nearby planet in intense ultraviolet light.

Or could flares be a driver of evolution? Just how much is too much when it comes to flaring? 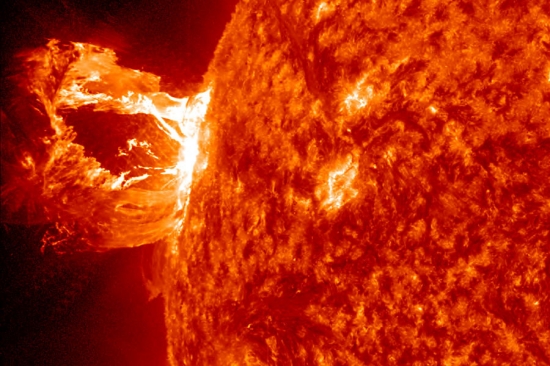 Image: A beautiful prominence eruption producing a coronal mass ejection (CME) shot off the east limb (left side) of the sun on April 16, 2012. Such eruptions are often associated with solar flares, and in this case an M1 class (medium-sized) flare occurred at the same time, peaking at 1:45 PM EDT. The CME was not aimed toward Earth. The eruption was captured by NASA’s Solar Dynamics Observatory in the 304 Angstrom wavelength, which is typically colored in red. Credit: NASA/SDO/AIA.

Howard’s team used data from TESS, the Transiting Exoplanet Survey Satellite, coupled with observations from the university’s Evryscope telescope array, to make the study. Previous flare work has homed in on a relatively small number of stars in terms of flare temperatures and radiation flux. Using the largest sample of superflares ever studied in terms of temperature, the new study finds it predictive of the amount of radiation that is likely to reach a planetary surface. A statistical relationship emerges between the size of a superflare and its temperature.

Superflares are not long-lasting events, emitting most of their UV in a rapid peak that may last between 5 and 15 minutes. The TESS data, taken simultaneously with the Evryscope observations, were obtained at a two-minute cadence for 42 superflares from 27 K5-M5 dwarfs. The work extends the range of our observations, while simultaneously playing into the potential target list for the James Webb Space Telescope.

The authors note that flare emissions have usually been approximated by a 9000 K blackbody (a surface that absorbs all radiant energy falling on it). But if superflares are hotter than this, the UV emission may surge by a factor of 10 higher than would otherwise be predicted through optical observation. Only a handful of multi-wavelength observations over short periods of time have been performed, and the TESS/Evryscope work doubles the total number found in the literature, helping us understand how temperature evolves in M-dwarf superflares. 43% of the superflares studied emit above 14,000 K, 23% above 20,000 K and 5% above 30,000 K, with the hottest one observed briefly reaching an incandescent 42,000 K.

We’re dealing, in other words, with a lot of UV flux here, particularly the dangerous ultraviolet C (UV-C) wavelength. From the paper, which takes note of a 2016 superflare observed at Proxima Centauri:

If HZ planets orbiting <200 Myr stars typically receive ∼120 W m−2 and often up to 103 W m−2 during superflares, then significant photo-dissociation of planetary atmospheres may occur (Ribas et al. 2016; Tilley et al. 2019). As a point of comparison, the likely water loss of Proxima b is due to the long-term effects of a time-averaged XUV flux (including flares) of less than 1 W m−2 (Ribas et al. 2016). The median value from the flares observed in YMGs [young moving group stars] is comparable to the ∼100 W m−2 of UV-C flux estimated at the distance of Proxima b during the Howard et al. (2018) Proxima superflare. While Abrevaya et al. (2020) found 10−4 microorganisms would have survived the Proxima superflare, it is presently unclear what effects a 10× increase in UVC flux would have on the evolution and survival of life prior to 200 Myr; it is possible such high rates of UV radiation could drive pre-biotic chemistry (Ranjan et al. 2017; Rimmer et al. 2018), suppress the origin of life on worlds orbiting young M-dwarfs (Paudel et al. 2019), or not impact astrobiology at all if the timescale for life to emerge is longer than 200 Myr (Dodd et al. 2017; Paudel et al. 2019).

Addendum: Alex Tolley makes a solid point about this material in the context I gave it. Let me quote him:

“The extract starting with:

does not make it clear that the flux is for UV, not total output. Only the low values (compared to Earth) and the later inclusion of “UV” allows the reader to infer that this is only the UV flux. In the paper, this section is prefaced by some text that talks about UV and makes the next paragraph clearer. For readers like me, not steeped in stellar knowledge, this could be clearer.”

Exactly so, and I appreciate the note, Alex. — PG

Three of the stars targeted in this study, the aforementioned Proxima Centauri, LTT 1445 and RR Cac AB are already known to host planets. And what of the age difference between young M-dwarfs and their presumably more sedate elder cousins? Should we preferentially target older M-dwarfs? The authors argue that it’s too early to make a call:

Although higher-mass young M-dwarfs may emit more biologically-relevant UV flux as a consequence of frequent superflares than do lower-mass young M-dwarfs, we do not confirm that more UV-C flux from early M-dwarf superflares consistently reaches the HZ. The relative habitability of early versus mid M-dwarf planets is a topic for future work. In particular, the shorter active lifetimes of early M-dwarfs may allow planetary atmospheres to recover as the star ages via degassing (Moore & Cowan 2020).

So we have a useful survey of optical temperature evolution in M-dwarf superflares, demonstrating the predictive quality of flare energy and impulse. The authors intend to continue observations of future flare activity at the same 2 minute cadence, aided by the re-observation of the Evryscope flare targets at its own 20 second cadence.

The paper is Howard et al., “EvryFlare III: Temperature Evolution and Habitability Impacts of Dozens of Superflares Observed Simultaneously by Evryscope and TESS,” in process at the Astrophysical Journal (preprint).