Gas giant planets in orbits similar to Jupiter’s are a tough catch for exoplanet hunters. They’re far enough from the star (5 AU in the case of Jupiter) that radial velocity methods are far less sensitive than they would be for star-hugging ‘hot Jupiters.’ A transit search can spot a Jupiter analogue, but the multi-year wait for the proper alignment is obviously problematic.

Still, we’d like to know more, because the gravitational influence of Jupiter may have a crucial role in deflecting asteroids and comets from the inner system, thus protecting terrestrial worlds like ours. If this is the case, then we need to ask whether we just lucked out by having Jupiter where it is, or whether there is some mechanism that makes the presence of a gas giant in a kind of ‘protective’ outer orbit likely when rocky worlds inhabit the inner system.

Enter the computer simulations run by Martin Schlecker at the Max Planck Institute for Astronomy (MPIA) in Heidelberg. Working with scientists at the University of Bern and the University of Arizona, Schlecker has run simulations of 1000 planetary systems evolving around Sun-like stars. In this case, ‘Sun-like’ means solar-type stars with the same mass as our own Sun. The simulated planetary systems are derived through a model known as the Generation III Bern global model of planetary formation and evolution, and the team has used the results to make a statistical comparison with a sample of observed exoplanet systems.

Schlecker calls gas giants in more distant orbits ‘cold Jupiters.’ They’re beyond the snowline, so that water can exist in the form of ice. The paper homes in on ‘super-Earths’ more massive than our own planet but far less massive than gas giants, which are estimated to orbit as many as 50% of stars in class F, G and K. In question is how cold Jupiters affect the formation of these inner super-Earths, and if in fact they make it easier for super-Earths to survive. Some recent studies have found a positive correlation between super-Earths and cold Jupiters. Is it sound? 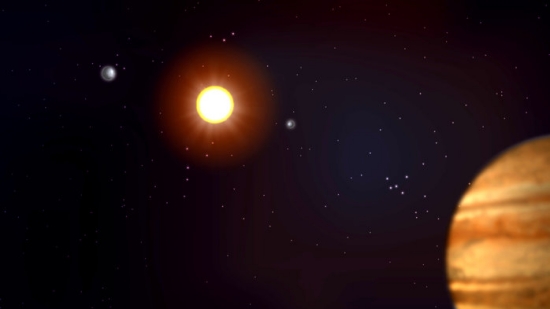 Image: Artistic impression of a planetary system with two super-Earths and one Jupiter in orbit around a Sun-like star. Simulations show that massive protoplanetary disks in addition to rocky super-Earths with small amounts of ice and gas often form a cold Jupiter in the outer regions of the planetary systems. Credit: MPIA graphics department.

The team’s goal is a “population synthesis of multi-planet systems from initial conditions representative of protoplanetary disks in star forming regions.” The computer model tracks how systems starting from random initial conditions evolve over several billion years as planets coalesce and interact with other objects in the system, with the possibility of collisions or ejections as orbits change due to the gravitational interactions factored in. You can see that with the difficulty in observing actual cold Jupiters in such settings, computer simulations are the way to proceed as the tools of observation are tuned up for future detections.

A hot Jupiter would be likely to disrupt planetary orbits, perhaps preventing the formation of some inner worlds altogether, but a cold Jupiter is far enough from the star that we can expect systems with inner super-Earths to exist, and indeed, some studies suggest that systems with a cold Jupiter often contain a super-Earth. But the simulations of Schlecker’s team indicate that only about a third of cold Jupiters occur in systems accompanied by at least one super-Earth. The correlation of inner super-Earths and cold Jupiters is there, but somewhat weaker than has been found through actual observation.

A possible explanation for the discrepancy between observation and simulation: Gas giant migration involving ‘warm Jupiters’ on intermediate orbits, causing super-Earth collisions or ejections. Here we can look to the parameters of the simulations. If the tendency of the simulated gas giants to migrate is slightly lowered, more inner super-Earths remain in numbers that are compatible with what we have recorded with our telescopes and spectrographs.

Here the limited number of actually observed systems with gas giant and super-Earths becomes an issue. Whereas the study’s simulations find a tendency to produce systems with both a cold Jupiter and at least one dry super-Earth (“with little water or ice, and a thin atmosphere at most,” as Schlecker notes), we only have a small number of systems (24) out of the 3200 planetary systems currently known that follow this configuration. Schlecker also notes that the Earth is comparatively dry — “…the Earth is, despite the enormous oceans and the polar regions, with a volume fraction for water of only 0.12% altogether a dry planet.” What we don’t find observationally are ice-rich super-Earths with a cold Jupiter in the same system. 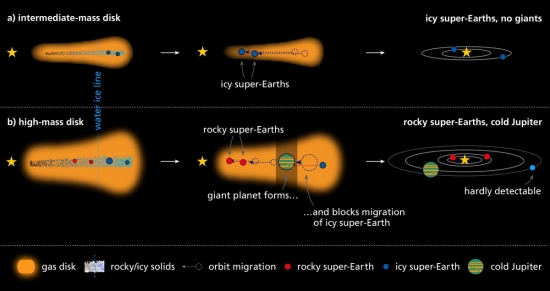 Image: Schematic diagram of the scenarios of how according to the analyzed simulations icy super-Earths (a) or rocky (ice-poor) super-Earths form together with a cold Jupiter (b). The mass of the protoplanetary disk determines the result. Credit: Schlencker et al./ MPIA.

The mass of the protoplanetary disk may be the key. A massive enough disk can form inner rocky planets with cold gas giants beyond the snowline, with the rocky planets being poor in ice and gas. Outer super-Earths that form ice-rich would be unable to migrate inward because of the giant planet. In disks of medium mass, by contrast, material to produce warm super-Earths is limited, and gas giants beyond the snowline give way to super-Earths abundant in ice.

In the authors’ words:

We find a difference in the bulk composition of inner super-Earths with and without cold Jupiters. High-density super-Earths point to the existence of outer giant planets in the same system. Conversely, a present cold Jupiter gives rise to rocky, volatile-depleted inner super-Earths. Birth environments that produce such dry planet cores in the inner system are also favorable for the formation of outer giants, which obstruct inward migration of icy planets that form on distant orbits. This predicted correlation can be tested observationally.

The mass of the protoplanetary disk is thus crucial, with super-Earth occurrence in combination with cold Jupiters rising with increasing disk mass, then dropping for disks massive enough to become dominated by giant planets. Interestingly, the study indicates that host stars of high-metallicity tend to have planetary systems with warm giant planets that can wreak havoc on inner planets in the system.

We’re in that region of the discovery space where we’re building theories that can be tested against future observations. Thus the next generation of space telescopes like the James Webb Space Telescope, as well as the Extremely Large Telescope from the European Southern Observatory. Do the simulations of Schlecker and team hold up? Do they show a disposition for planets of Earth size, rather than the larger super-Earths, to exist in systems with cold Jupiters?

We won’t know, the scientist acknowledges, until we have the ability to detect planets like ours in large numbers. For now, the only numbers we can begin to run are those of the larger super-Earth population, and even here, we’re still building the statistical sample. What the new instrumentation shows in coming years will help us fine-tune these simulated results.