The SAINT-EX telescope, operated by NCCR PlanetS, produces a nice resonance as I write this morning. The latter acronym stands for the National Centre of Competence in Research PlanetS, operated jointly by the University of Bern and the University of Geneva. The former, SAINT-EX, identifies a project called Search And characterIsatioN of Transiting EXoplanets, and the team involved explicitly states that they shaped their acronym to invoke Antoine de Saint-Exupéry, legendary aviator and author of, among others, Wind, Sand and Stars (1939), Night Flight (1931) and Flight to Arras (1942). 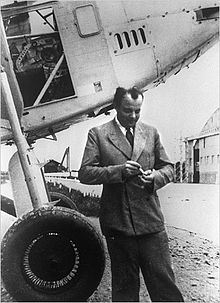 I’ve talked about Saint-Exupéry now and again throughout the history of Centauri Dreams, not only because he was an inspiration for my own foray into flying, but also because for our interstellar purposes he is credited with this inspirational thought:

I say Saint-Exupéry is ‘credited’ with this because it seems to be a condensation of a longer passage that appeared in his 1948 title La Citadelle and I’ve never been able to track the oft-quoted short version down to an original in this specific form. No matter, it’s a grand thought and it plays to our passions as explorers and mappers of new worlds.

So good for NCCR PlanetS for the nod to a favorite writer, and thanks for its recent work at TOI-1266, a red dwarf now known to host at least two planets. The confirmation was achieved with the SAINT-EX robotic 1-meter telescope that the project operates in Mexico; the paper was recently published in Astronomy & Astrophysics. TOI identifies a TESS Object of Interest, meaning the object had been considered promising for follow-up work to validate the candidate signatures as planets. The paper on TOI-1266 provides the needed confirmation.

The orbits are circular, co-planar and stable. Referring to the more than 3000 transiting planets thus far identified, which includes 499 with more than a single transiting world, the authors discuss distinctive planetary populations. Both planets at TOI-1266 are found at what lead author Brice-Olivier Demory calls the ‘radius valley,’ for reasons explained in the paper:

This large sample of transiting exoplanets allows for in-depth exploration of the distinct exoplanet populations. One such study by Fulton et al. (2017) identified a bi-modal distribution for the sizes of super-Earth and sub-Neptune Kepler exoplanets, with a peak at ∼1.3 R⊕ and another at ∼2.4 R⊕. The interval between the two peaks is called the radius valley and it is typically attributed to the stellar irradiation received by the planets, with more irradiated planets being smaller due to the loss of their gaseous envelopes. 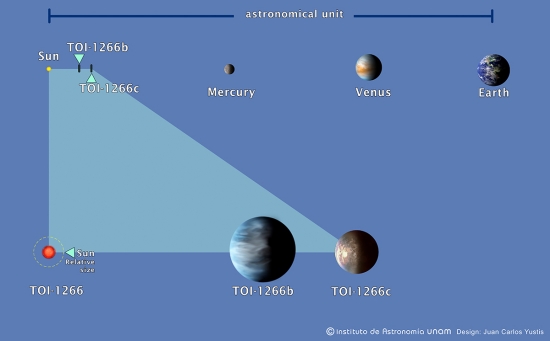 Image: Size of TOI-1266 system compared to the inner solar system at a scale of one astronomical unit, the distance between the Earth and the Sun. The orbital distances of the two exoplanets discovered around the star TOI-1266, which is half of the size of the Sun, are smaller than Mercury’s orbital distance. TOI-1266 b, the closest planet to the star at a distance of 0.07 astronomical units, has a diameter of 2.37 times that of Earth’s and is therefore considered a sub-Neptune. TOI-1266 c, at 0.01 astronomical units from its star and with 1.56 times the Earth’s diameter, is considered a super-Earth. For each planetary system, the star’s diameter and the orbital distances to its planets are shown in scale. The relative diameter of all planets of both systems are on scale, being TOI-1266 b the largest planet and Mercury the smallest. The zoom-in to TOI-1266, in the lower part of the image, shows that the irradiation received by TOI-1266 c from its star is 21% larger than the irradiation received by Venus from the Sun in the upper part of the image. © Institute of Astronomy, UNAM/ Juan Carlos Yustis.

It’s useful to have a super-Earth and a sub-Neptune in the same system because this allows for tighter constraints on formation models. The paper argues that this will be “a key system to better understand the nature of the radius valley around early to mid-M dwarfs.”

It’s also interesting that TOI-1266’s small size and relative proximity (about 117 light years) make it a possible target for atmospheric studies with future instruments. The authors show that the James Webb Space Telescope should be able to operate well above the observatory’s noise floor level in performing transmission spectroscopy here (i.e., viewing changes in the star’s light as the either planet moves first in front of and then is eclipsed by the star). The TOI-1266 planets compare favorably to TRAPPIST-1b on this score, and the host star shows no evidence of significant starspots that might distort the signal of the exoplanet atmospheres. 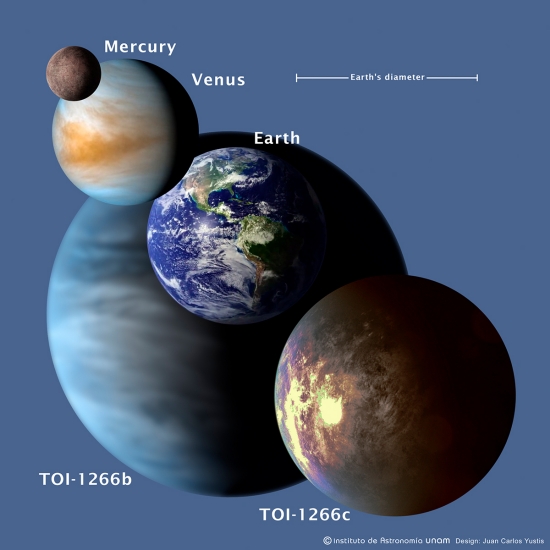 Image: Direct comparison among the planets of TOI-1266 system with the interior planets of the solar system. © Institute of Astronomy, UNAM / Juan Carlos Yustis.