Back into the Clouds of Venus

We’re a long way from knowing what is going on in terms of possible life in the clouds of Venus, but one thing is already clear: The phosphine signature, as well as its implications, is going to be thrashed out in the journals, as witness a new study from Rakesh Mogul (Cal Poly Pomona, Pomona, CA) and colleagues that looks at data from the Pioneer-Venus Large Probe Neutral Mass Spectrometer (LNMS), dating back to the Pioneer Venus Multiprobe mission in 1978. These data seem to support the presence of phosphine, while leaving its origin unknown.

But Clara Sousa-Silva (Harvard-Smithsonian Center for Astrophysics), who was involved in the earlier phosphine work led by Jane Greaves at Cardiff University (see What Phosphine Means on Venus), subsequently examined data collected in 2015 at Mauna Kea and found no sign of phosphine. And now we have another paper, this one submitted to Science by Ignas Snellen and team (Leiden University), that carries its message in the title: “Re-analysis of the 267-GHz ALMA observations of Venus: No statistically significant detection of phosphine.”

Finally, let me mention a study led by Arijit Manna (Midnapore City College, West Bengal, India) reporting on a possible detection of the amino acid glycine in the Venusian clouds. I’ve given citations for all of these papers below.

There are all kinds of reasons for data discrepancies on phosphine depending on its possible distribution in Venus’ atmosphere, so until we get further information, we’re left to speculate. But let’s welcome Venus back into the spotlight. I’m glad to see the re-emergence of public interest, and the fortunes of Venus in terms of future mission desirability are obviously on the rise, something the Venus science community must welcome as parched desert-crossers welcome an unexpected flowing spring. 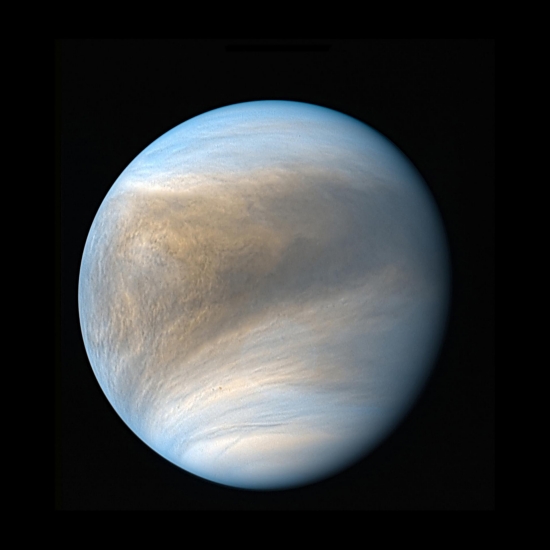 Image: Venus from the perspective of the Japanese Akatsuki probe. Credit: JAXA/ISAS/DARTS/Damia Bouic.

Some kind of biology in the Venusian clouds might even implicate Earth and the possibility of biological spread through rocky debris. While speculation continues, I’m interested in the orbital movements of the Mercury-bound BepiColombo probe, which happened to be approaching Venus in October, using the planet to bleed off velocity as it nudges into the innermost system. It will hardly resolve the matter, but Venus and BepiColombo are intimately connected not only gravitationally but thanks to the opportunity Venus offers to check out key onboard systems.

BepiColombo is actually a combination mission, including the Mercury Planetary Orbiter (MPO), constructed by the European Space Agency, and the Mercury Magnetospheric Orbiter (MMO), a product of the Japan Aerospace Exploration Agency (JAXA). The duo are currently joined but will separate into individual orbits once Mercury is attained.

Two Venus flybys are in the works, as we recently saw in these pages, and the first of these, which took place on October 15, brought the craft within 11,000 kilometers of the planet. BepiColombo is swapping some of its kinetic energy to Venus as it in turn reduces speed, with the second Venus flyby planned for August of 2021 and six close Mercury flybys before the craft enters orbit around the planet at the end of 2025. We now get the chance to test BepiColombo’s MErcury Radiometer and Thermal Infrared Spectrometer (MERTIS), which has already been tested in an earlier Earth/Moon flyby that took place in our COVID spring.

Designed to measure the spectra of rock-forming materials on Mercury’s surface, MERTIS can likewise use its infrared sensors to probe the Venusian atmosphere, with a closer approach pending in the second flyby. According to German aerospace center DLR, MERTIS is sensitive to wavelengths of 7 to 14 and 7 to 40 micrometers respectively in its two uncooled radiation sensors. Both sensors were used during the approach to Venus and approximately 100,000 individual images are expected. At the same time, the Japanese Venus orbiter Akatsuki conducted its own observations, along with Earth-based instruments both professional and amateur. 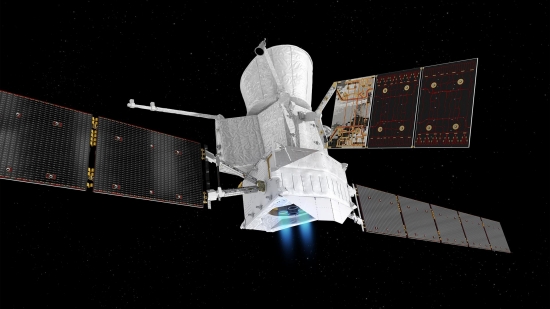 Phosphine is a short-lived molecule, suggesting that a source on Venus or in its atmosphere is replenishing it, and scientists are still trying to find out if abiotic factors could be in play here, including the possibility of volcanism or reactions following meteorite strikes, even lightning discharges. MERTIS and five other activated instruments on the Mercury Planet Orbiter will not be able to detect phosphine from the flyby distance, but the BepiColombo team has reasons for making these observations that do not involve the gas, says Gisbert Peter, MERTIS project manager at the DLR Institute of Optical Sensor Systems, where the instrument was built:

“During the Earth flyby, we studied the Moon, characterising MERTIS in flight for the first time under real experimental conditions. We achieved good results. Now we are pointing MERTIS towards a planet for the first time. This will allow us to make comparisons with measurements taken prior to the launch of BepiColombo, to optimise operation and data processing, and to gain experience for the design of future experiments.”

Peter Wurz is project leader on STROFIO, which is a mass spectrometer designed at the University of Bern to record the atmosphere of Mercury and examine its composition. Wurz anticipates the results at Venus using not just data from STROFIO but also the spacecraft’s MIPA and PICAM instruments, likewise developed at the university.

“We are expecting data from the ionized particles in Venus’ atmosphere from these two instruments, which are switched on during the Venus flyby. The amount of particle loss and its composition can be determined using the two instruments.”

All of which is an excellent workout for BepiColombo, but MERTIS can also be expected to examine sulphur dioxide concentrations, a reduction of which was recorded about ten years ago. Meanwhile, scientists can study Venus’ atmospheric composition, with the instruments aboard the Japanese Mercury Magnetospheric Orbiter tracking its structure and dynamics. Expect no answers to the astrobiological riddle, but helpful data about Venus otherwise.

And isn’t it interesting seeing how tricky it is to get into the inner system? All those flybys point back to Mariner 10, which used an initial Mercury flyby to enable additional close passes at the planet — these calculations came from Giuseppe ‘Bepi’ Colombo, the Italian physicist for whom the current mission is named. The recent maneuver reduced the craft’s relative speed compared to Mercury to 1.84 kilometers per second, the goal being to orbit the Sun at close to Mercury’s speed and eventually become captured by the gravity of the small world.

The paper referenced in the first paragraph is Mogul et al., “Is Phosphine in the Mass Spectra from Venus’ Clouds?” available as a preprint. The Sousa-Silva paper is “A stringent upper limit of the PH3 abundance at the cloud top of Venus,” in press at Astronomy & Astrophysics (abstract). The paper on glycine is Manna et al., “Detection of simplest amino acid glycine in the atmosphere of the Venus,” submitted to Science (preprint). The “Snellen paper is “Re-analysis of the 267-GHz ALMA observations of Venus: No statistically significant detection of phosphine,” submitted to Science (abstract).