What accounts for the differences in Titan’s craters? It will be helpful from an operational standpoint to learn more, for in 2027 the Dragonfly mission will launch, with Selk Crater a target. An equatorial dune crater, Selk is completely covered in a dark organic material, unlike other higher-latitude craters on the Saturnian moon that are scoured and cleansed by rain. We have learned from data produced by Cassini’s Visible and Infrared Mapping Spectrometer (VIMS) that Titan’s craters come in two kinds. Equatorial craters like Selk occur in dune fields and consist mostly of organics. Mid-latitude craters show a mix of organics and water ice.

The organic material generated by processes in Titan’s thick atmosphere is sand-like, piling up in equatorial regions but being eroded at the higher, wetter latitudes. For Dragonfly’s purposes, we want to know more about how the methane rain and streams affect the surface as we fine-tune the data analysis and monitoring techniques to be used in the mission.

What’s happening in Titan’s craters reminds us just how active the surface here is, says Anezina Solomonidou, a research fellow at the European Space Agency and lead author of a paper that explores the issue:

“The most exciting part of our results is that we found evidence of Titan’s dynamic surface hidden in the craters, which has allowed us to infer one of the most complete stories of Titan’s surface evolution scenario to date. Our analysis offers more evidence that Titan remains a dynamic world in the present day.” 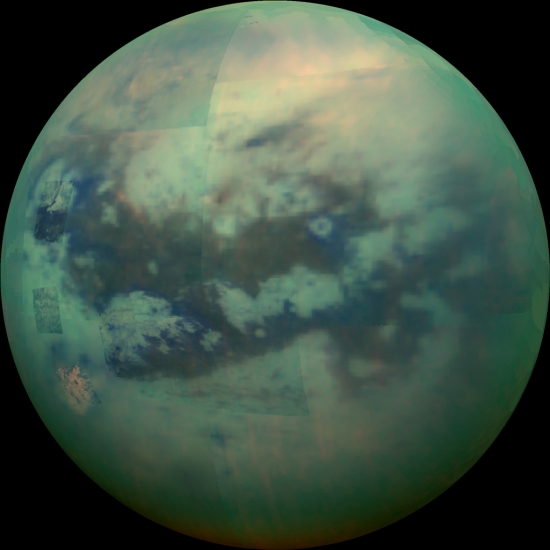 Image: This composite image shows an infrared view of Saturn’s moon Titan from NASA’s Cassini spacecraft, acquired during the mission’s “T-114” flyby on Nov. 13, 2015. The spacecraft’s visual and infrared mapping spectrometer (VIMS) instrument made these observations, in which blue represents wavelengths centered at 1.3 microns, green represents 2.0 microns, and red represents 5.0 microns. A view at visible wavelengths (centered around 0.5 microns) would show only Titan’s hazy atmosphere. The near-infrared wavelengths in this image allow Cassini’s vision to penetrate the haze and reveal the moon’s surface. Credit: NASA/JPL/University of Arizona/University of Idaho.

Look closely at the above image and you’ll see Titan’s largest confirmed impact crater, called Menrva, near the limb above center to the left. Cassini was at about 10,000 kilometers from the moon during this approach, a good deal higher than many flybys, but the altitude allowed the VIMS instrument to cover wide areas at moderate resolution. You can also see two dark bands, parallel regions filled with dunes at the center of the image, with some regions of finer resolution inset in the image; these were acquired near the spacecraft’s closest approach.

But back to the evolution of those craters, which is the subject of the paper in Astronomy & Astrophysics. The differences between craters are telling, for they point to different evolution depending on geography. When objects make it through Titan’s atmosphere to impact on the surface, the heat generated by the event mixes organic materials and water ice from below. The cleansing methane rain subsequently falls in the mid-latitude plains, whereas in the equatorial regions, the impact areas are covered by a layer of sandy organic sediment.

The two classes of impact crater are strikingly different. Processes after the impact account for the outcomes. From the paper:

These observations agree with the evolution scenario proposed by Werynski et al. (2019), wherein the impact cratering process produces a mixture of organic material and water ice, which is later “cleaned” through fluvial erosion in the mid-latitude plains. However, the cleaning process does not appear to operate in the equatorial dunes; rather, the dune craters are quickly covered by a thin layer of sand sediment. This scenario agrees with other works that suggest that atmospheric deposition is similar in the low-latitudes and midlatitudes on Titan, but with more rain falling onto the higher latitudes causing additional processing of materials in those regions… In either case, it appears that active processes are working to shape the surface of Titan, and it remains a dynamic world in the present day. 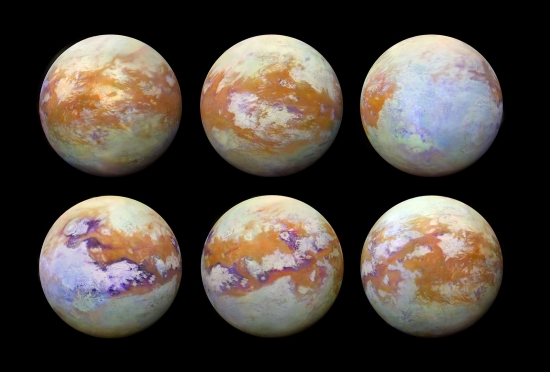 Image: These six infrared images of Saturn’s moon Titan represent some of the clearest, most seamless-looking global views of the icy moon’s surface produced so far. The views were created using 13 years of data acquired by the Visual and Infrared Mapping Spectrometer (VIMS) instrument on board NASA’s Cassini spacecraft. Credit: NASA/JPL-Caltech/Stéphane Le Mouélic, University of Nantes, Virginia Pasek, University of Arizona.

With a sea of water and ammonia beneath the crust, Titan is a place where a large impact will move organic materials between the surface and the ocean below, highlighting the significance of Dragonfly’s future work at Selk Crater as a way to probe the moon’s composition. And while it seems likely that erosion has obscured most impact craters from Titan’s past, we do have 90 potential features, according to the paper, that may be craters to work with. These features offer a window into the atmosphere’s influence on the surface through weathering while exposing material from the interior which Cassini’s RADAR instrument was unable to probe.

The paper is Solomonidou et al., “The chemical composition of impact craters on Titan,” Astronomy & Astrophysics Vol. 641, A16 (September 2020). Abstract.

Next post: Jupiter, Saturn and the Early Solar System