Yesterday’s paper from Matt Clement and team reminded us of the enormous transformation that can take place in a planetary system as it lurches toward eventual stability. Gas giants have so much to say about how this process occurs, with their gravitational interactions sometimes ejecting other worlds from the system. Ejected planets are often called ‘rogue’ planets because they wander the galaxy without orbiting a star. Their numbers may be vast.

Clement and team think we may have ejected an ice giant from our early system, as we discussed yesterday. Whatever the case, I’ve been talking about rogue planets for about ten years, and as I look back, I run into intriguing finds like PSO J318.5-22, which is described in a 2013 paper from Michael Liu and colleagues (citation below). Says Liu (University of Hawaii):

“We have never before seen an object free-floating in space that looks like this. It has all the characteristics of young planets found around other stars, but it is drifting out there all alone.”

We learn from the paper that this object shows similarities to young, dusty planets in terms of luminosity, mass, spectrum, etc. It’s also useful because it’s likely a member of the β Pic moving group, meaning we can glean something about its age, about 12 million years. Have a look. 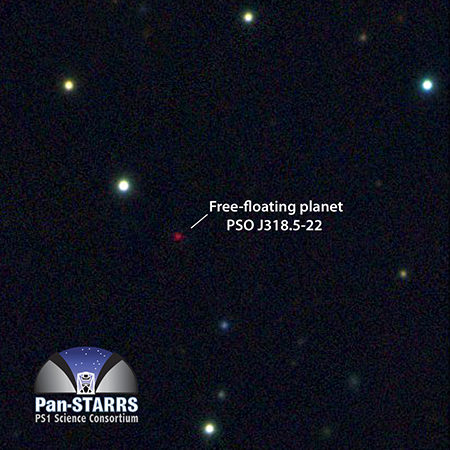 Image: One apparent free-floating planet turned up in a search for brown dwarfs. This multicolor image is from the Pan-STARRS1 telescope, showing PSO J318.5-22, in the constellation of Capricorn. The planet is extremely cold and faint, with most of its energy emitted at infrared wavelengths. The image is 125 arcseconds on a side. Credit: N. Metcalfe & Pan-STARRS 1 Science Consortium.

Estimates of the number of rogue planets are all over the map, with one recent one being 2000 objects ranging in size between the Moon and Jupiter per main sequence star. That’s from a 2018 study by Xinyu Dai & Eduardo Guerras (University of Oklahoma), but if we want to jump to the high end, we can go with Louis Strigari (Stanford University) and colleagues: 105 compact objects per main sequence star. See Island Hopping to the Stars for Strigari, and Detection of Extragalactic Planets? for Dai and Guerras, where I give citations.

Now we have word of a small rogue world probably about the size of the Earth. Przemek Mroz (California Institute of Technology) is lead author of the study. Detected through gravitational microlensing, which is about the only way it could have been found with our current technologies, the world is labelled OGLE-2016-BLG-1928. This is the smallest rogue candidate yet identified, with the microlensing event having a timescale of a scant 42 minutes. 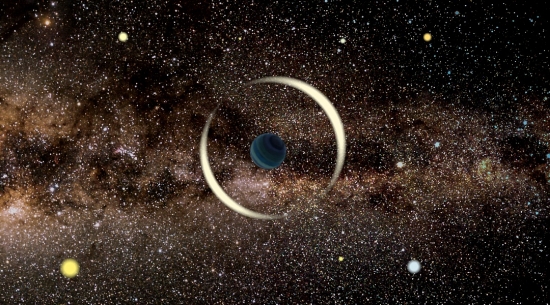 Gravitational microlensing occurs when a foreground star (or planet, in this case) moves in front of a background stellar object, causing the light from the more distant star to be magnified. A brief burst in magnification becomes the signal identifying the star and any associated exoplanet, but in the case of rogue planets, we have no central star. Here’s Mroz on the matter:

“If a massive object (a star or a planet) passes between an Earth-based observer and a distant source star, its gravity may deflect and focus light from the source. The observer will measure a short brightening of the source star. Chances of observing microlensing are extremely slim because three objects – source, lens, and observer – must be nearly perfectly aligned. If we observed only one source star, we would have to wait almost a million year to see the source being microlensed.” 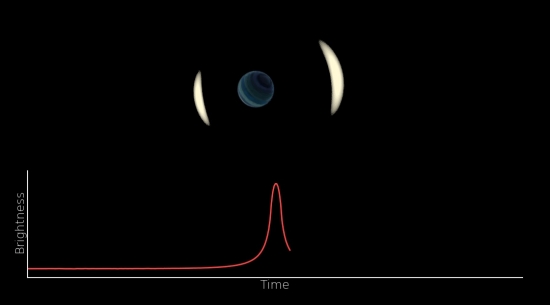 Image: Changes of brightness of the observed star during the gravitational microlensing event by a free-floating planet. Credit: Jan Skowron / Astronomical Observatory, University of Warsaw.

Given how few of these objects we have detected, and the wide range of estimates in the population of rogue planets, it’s hard to make too many statements about them. Are they all the likely result of gravitational interactions in an infant or maturing stellar system? Is there a risk of mistaking ultracool brown dwarfs for planets in this regime (I assume the answer is yes)? In the case of OGLE-2016-BLG-1928, are we absolutely sure there is no host star? Consider this passage from the paper:

The discovery of OGLE-2016-BLG-1928 demonstrates that current microlensing surveys are capable of finding extremely-short-timescale events. Although the mass of the lens cannot be unambiguously measured, properties of the event are consistent with the lens being a sub-Earth-mass object with no stellar companion up to the projected distance of ∼ 8 au from the planet. Thus, the lens is one of the best candidates for a terrestrial-mass rogue planet detected to date. This population of low-mass free-floating (or wide-orbit) planets may be further explored by the upcoming microlensing experiments.

Would OGLE have detected a star here if the planet in question was at Saturn’s 10 AU distance from it? This was one tricky detection, “at the edge of current limits of detecting short-timescale microlensing events,” according to the authors. It’s suggestive of a rogue planet. Looking ahead, we’re also moving toward a space-based microlensing capability in the Nancy Grace Roman Space Telescope (WFIRST). Future surveys will doubtless turn up rogue planets that will add to the ground-breaking work accomplished by dedicated ground-based surveys like OGLE.

And I wonder: What happened to that third ice giant that was ejected from our early Solar System? Is it out there wandering the galaxy, yet another rogue far from the star of its birth?