Voyager 2: Back in Two-Way Communication

It’s reassuring to hear that we’re in two-way contact once again with Voyager 2. Since last March, controllers have been limited to receiving X-band (8 to 12 GHz) downlink data, with no capability to uplink commands to the craft via S-band (2 to 4 GHz). This has been a problem unique to Voyager 2 thanks to its trajectory. The Deep Space Network’s three radio antenna facilities — Canberra, Australia; Goldstone, California and Madrid, Spain — are positioned so that at least one facility is available for communications with our far-flung space probes.

While Voyager 1 can talk to us via the two northern hemisphere DSN stations, Voyager 2’s close flyby of Neptune’s large moon Triton in 1989 bent its course well south of the ecliptic. 18.8 billion kilometers from Earth, Voyager 2 can only line up on Canberra, and the antenna called Deep Space Station 43 (DSS43) has been the only southern hemisphere dish with a transmitter capable of reaching the craft at the right frequency to send commands. DSS43 went offline for equipment upgrades to handle increasingly problematic aging equipment.

“The DSS43 antenna is a highly specialized system; there are only two other similar antennas in the world, so having the antenna down…is not an ideal situation for Voyager or for many other NASA missions. The agency made the decision to conduct these upgrades to ensure that the antenna can continue to be used for current and future missions. For an antenna that is almost 50 years old, it’s better to be proactive than reactive with critical maintenance.” 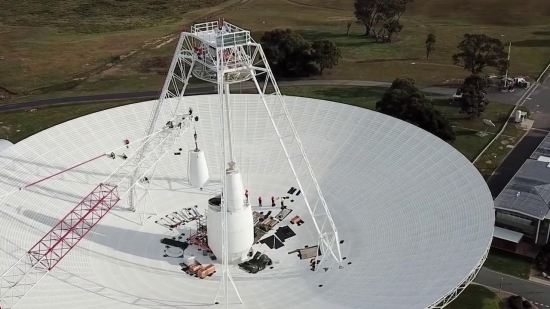 Image: Crews conduct critical upgrades and repairs to the 70-meter-wide radio antenna Deep Space Station 43 in Canberra, Australia. In this image, one of the antenna’s white feed cones (which house portions of the antenna receivers) is being moved by a crane. Credit: CSIRO.

Only DSS43 has the S-band transmitter powerful enough to reach and communicate with Voyager’s dated technology, but the upgrades will also be significant for Moon and Mars missions going forward. From the Voyager 2 perspective, the craft has been in a quiescent mode that still allowed return of science data, with Canberra’s three 34-meter dishes configured to listen to its signal, though unable to transmit commands. Now DSS43 has successfully tested its new hardware and we can get back to uploading commands as needed to the probe.

“What makes this task unique is that we’re doing work at all levels of the antenna, from the pedestal at ground level all the way up to the feedcones at the center of the dish that extend above the rim,” said Brad Arnold, the DSN project manager at NASA’s Jet Propulsion Lab in southern California. “This test communication with Voyager 2 definitely tells us that things are on track with the work we’re doing.”

All of which is excellent news, as Voyager 2 seems healthy. Recall that the spacecraft accidentally overdrew its power supply last January, leading to the automatic shutdown of its science instruments. The upgrade of DSS43 began after that problem had been resolved. The station now has two new radio transmitters as well as upgraded heating and cooling equipment, power supply and support upgrades demanded by the new transmitters.

So both our active craft in interstellar space are in two-way communication again. It’s instructive, and a bit awe-inspiring, to remember how difficult it is to track a signal as weak as the one Voyager can produce. At Jupiter, the craft could transmit at 115,000 kilobits per second. This is a 23-watt radio transmitter that produced, at the giant planet, a signal that was one hundred-millionth as powerful as a cell phone battery by the time it reached the DSN on Earth. And of course Voyager keeps going. Even before it went interstellar, Voyager 2’s power levels received at Earth were more than five hundred times fainter than at the Jupiter encounter.

We may be able to keep the Voyagers alive into the middle of this decade by clever cycling of their instruments and systems, with the last surviving science instrument likely being the magnetometer, which has the lowest power requirement. A faint engineering signal might still be feasible into the 2030s, but no one knows exactly. It would be wonderful if we could stay in touch with these craft until 2027, which would mark their 50th year in flight. Go Voyager.

Next post: A Fast Radio Burst in the Milky Way