We’ve talked about the Drake Equation a good deal over the years, but I may not have mentioned before that when Frank Drake introduced it in 1961, it was for the purpose of stimulating discussion at a meeting at the National Radio Astronomy Observatory in Green Bank, West Virginia that was convening to discuss the nascent field of SETI.

This was in the era of Drake’s Project Ozma and the terms of the SETI debate were hardly codified. Moreover, as Nadia Drake recounts in this absorbing look back at her father’s work in that era, Drake had spent the time immediately before the meeting trying to line up Champagne for UC-Berkeley biochemist Melvin Calvin, who was about to win the Nobel Prize. 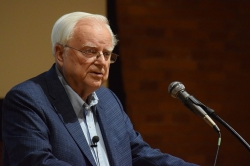 So there was a certain ad hoc flavor to the equation, one that Drake assembled more or less on the fly to clarify the factors to be considered in looking for other civilizations. How Drake did all this while trying to locate a sufficient quantity of good Champagne in the rural West Virginia of 1961 is beyond me and adds to his mystique.

Sparkling wine aside, the Drake Equation in various forms has continued to inform discussion. The likelihood of detecting alien civilizations could be approached by multiplying the seven factors Drake came up with, which are shown in the figure below. The number of detectable alien civilizations is N. The Drake Equation obviously relied on guesswork at the time, given that we knew little about the factors involved other than the rate of star formation.

There’s still a lot of play in these numbers, of course, but it’s fascinating to watch the progress of exoplanetary science as we begin to fill in the numbers through actual observation. Notice in particular ne the number of planets, per star, that could support life. This value is what gets play in the recently released (on arXiv) paper from Steve Bryson and a large number of colleagues at the SETI Institute, NASA and a variety of other organizations.

What catches the eye is the figure of 300 million, which is the number the researchers give for potentially habitable planets in the Milky Way. Let’s drill into this a bit: The researchers are computing the occurrence of rocky worlds, defined here as planets within a certain range of radius (0.5 R⊕ ≤ r ≤ 1.5 R⊕), orbiting stars with effective temperatures of 4,800-6,300 K. The host stars cover main-sequence dwarf stars from Kepler’s DR25 planet candidate catalog as well as stars in data compiled by the European Space Agency’s Gaia mission. As the authors note: “We base our occurrence rates on differential population models dependent on radius, instellation flux and host star effective temperature.”

This is a change of pace from the norm, so let’s turn to the paper:

Hence the decision to work with instellation flux, which measures the photon flux on each planet as received from its host star. The authors say that this is the first paper on occurrence rates for habitable zone planets that operates on star-dependent photon output. In terms of effective temperature, G-class stars like the Sun are in the range of 5,200–6,000 K. F-class is 6,000–7,500 K, but as the paper notes, the paucity of F stars in the sampled data leads to the authors setting the temperature limits lower. K-class stars show up at effective temperatures of 3,700–5,200 K. The range used in this paper — 4,800-6,300 K — also excludes M-dwarfs, whose effective temperatures range from 2,400–3,700 K.

Leaving out M-dwarfs could substantially under-count habitable zone worlds, but we also have enough concerns about tidal lock, stellar flare activity and atmospheric loss that we can’t assume M-dwarf planets are habitable. In any case, the authors have other reasons for the decision, including a very practical matter of future observation. After all, an analysis like this may well be useful as we ponder our target lists, and we also have to remember the limits of transit observation Kepler had to deal with:

The reason for limiting to Teff > 4800 K is two fold: (1) The inner working angle (IWA, the smallest angle on the sky at which a direct imaging telescope can reach its designed ratio of planet to star flux) for the LUVOIR coronagraph instrument ECLIPS falls off below 48 milliarc sec at 1 micron (3λ/D) for a planet at 10 pc for Teff ≤ 4800 K, and (2) Planets are likely tidal-locked or synchronously rotating below 4800 K that could potentially alter the inner HZ limit significantly…The upper limit of 6300 K is a result of planets in the HZs having longer orbital periods around early F-stars, where Kepler is not capable of detecting these planets…

So bear this in mind: Excluding what could be vast numbers of habitable planets in M-dwarf orbits, we still wind up with 300 million possibilities in the broad range of K-class through G-class stars. Co-author Jeff Coughlin is director of Kepler’s Science Office:

“This is the first time that all of the pieces have been put together to provide a reliable measurement of the number of potentially habitable planets in the galaxy. This is a key term of the Drake Equation, used to estimate the number of communicable civilizations — we’re one step closer on the long road to finding out if we’re alone in the cosmos.” 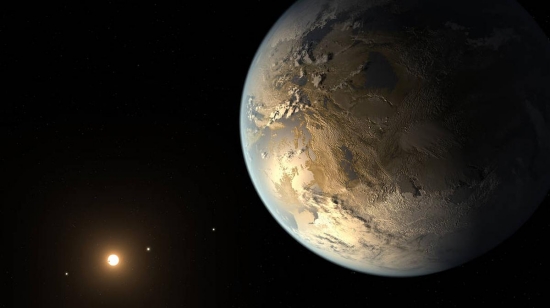 When you go through this paper, bear in mind what Centauri Dreams associate editor Alex Tolley pointed out to me — The Drake ne factor refers to the number of planets per star that can support life. What the Bryson et al. paper takes as its starting point is the number of rocky planets in the habitable zone, and this could mean that the figure of 300 million ‘habitable’ worlds takes in planets that resemble Venus more than Earth. It may also include water worlds, where the likelihood of technological civilization is unknown.

So Drake’s term ne is not the same value as taken up in the new paper. Nonetheless, let’s return to that dazzling figure of 300 million, because when we’re dealing with that many planets of interest, we can afford to lose a number that turn out to be uninhabitable and still consider ourselves overwhelmed with possibilities for life.

Numbers like these have implications for stars relatively near the Sun. The authors look at both the conservative and optimistic habitable zone, with the narrower ‘conservative habitable zone’ bounded by the ‘moist greenhouse’ and ‘maximum greenhouse’ limits, and the wider ‘optimistic habitable zone’ bounded by the ‘current Venus’ and ‘early Mars’ limits. I’m drawing this descrtiption from the Planetary Habitability Laboratory’s summary of work by Ravi kumar Kopparapu and colleagues (citation below). 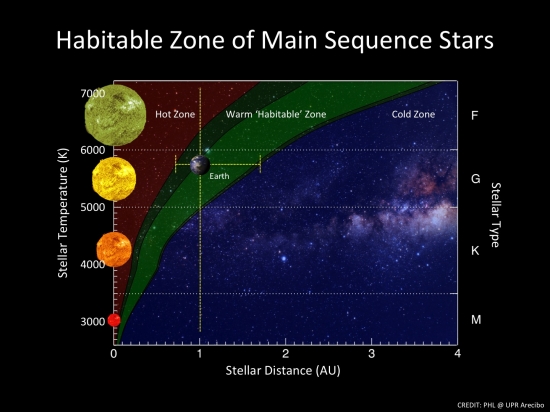 Filtering their results using calculations for the conservative habitable zone, the authors maintain they can say with 95 percent confidence that the nearest rocky habitable zone planet around either a G- or K-class star is within 6 parsecs (roughly 20 light years). There could be four habitable zone rocky planets around G- and K-dwarfs within 10 parsecs of the Sun.

How to build our small planet catalog to reduce uncertainties in the calculations? The answer is clearly more space-based observations even as new ground-based telescopes come online. Let’s also remember what we lost because of Kepler’s mechanical problems. While we did get a K2 extended mission, the original Kepler extended mission was meant to continue the ‘long stare’ at the original starfield, adding four more years of precision photometric data. The number of small planets in the habitable zone would have been significantly extended.

…by definition, Kepler planet candidates must have at least three observed transits. The longest orbital period with three transits that can be observed in the four years of Kepler data is 710 days (assuming fortuitous timing in when the transits occur). Given that the habitable zone of many F and late G stars require orbital periods longer than 710 days, Kepler is not capable of detecting all habitable-zone planets around these stars.

Given that upcoming missions like PLATO do not include such long stares on a single field of stars (PLATO plans no more than 3 years of continuous observation of a single field), we will need future missions to achieve what the original Kepler extended mission might have done, which would have been a doubling of the DR25 dataset and a large yield of small habitable zone planets.

Next post: Europa: Night-time Glow a New Tool for Analysis

Previous post: A Fast Radio Burst in the Milky Way