When it comes to Europa, it’s the surface that counts as we try to learn more about the ocean beneath. Maybe one day we’ll be able to get some kind of probe through the ice, but for now we have to think about things like upwellings of water that percolate up through cracks in the frozen landscape, and unusual areas like Europa’s ‘chaos’ terrain. Here, fractures and evident ‘rafts’ of ice show disruptions where the icy surface of the moon experiences Jupiter’s tidal effects. 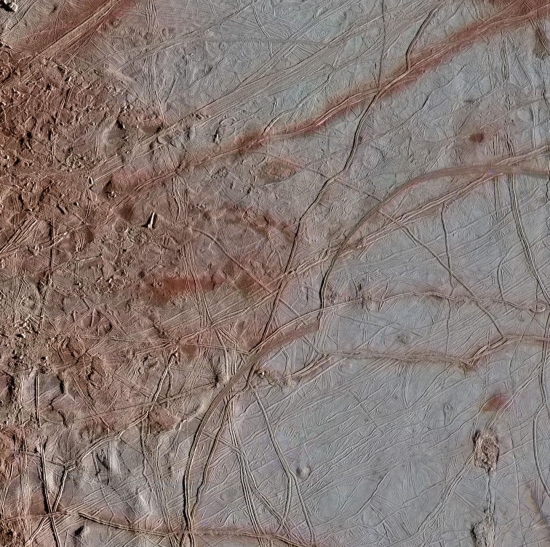 Image: The surface of Jupiter’s moon Europa features a widely varied landscape, including ridges, bands, small rounded domes and disrupted spaces that geologists called “chaos terrain.” This newly reprocessed image, along with two others along the same longitude, was taken by NASA’s Galileo spacecraft on Sept. 26, 1998, and reveals details of diverse surface features on Europa. Credit: NASA/JPL-Caltech/SETI Institute.

What kind of materials might we find frozen into the cracks and grooves of such terrain? Europa Clipper will doubtless tell us more as it updates Galileo’s two-decade old data. Meanwhile, we recently learned about another way to study the moon’s surface composition. At the Jet Propulsion Laboratory, Murthy Gudipati and team have been doing laboratory work that informs our understanding of how Europa reacts to the inflow of high-energy radiation from Jupiter. The high flux of charged particles occurs because of interactions with Jupiter’s magnetic field.

The key to the work is the fact that different salty compounds produce their own unique signature as they respond to this radiation bath. A glow emerges — sometimes green to the eye, sometimes edging into blue or white — depending on the materials in question. Gudipati’s team used a spectrometer, as we would expect, to study the surface, but here the observations are taking place not with reflected sunlight on the dayside but Europa’s own glow at night. The paper on this work, which appeared in Nature Astronomy, shows us how much data could be gathered by a method that seems to have surprised the scientists involved.

“[W]e never imagined that we would see what we ended up seeing. When we tried new ice compositions, the glow looked different. And we all just stared at it for a while and then said, ‘This is new, right? This is definitely a different glow?’ So we pointed a spectrometer at it, and each type of ice had a different spectrum.” 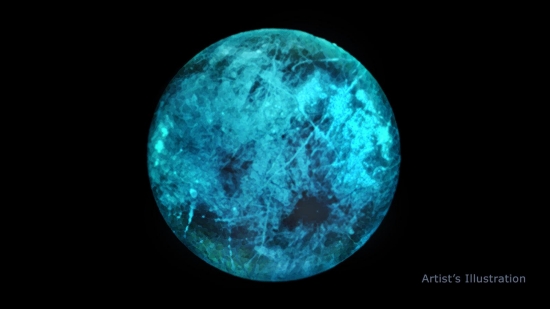 Image: This illustration of Jupiter’s moon Europa shows how the icy surface may glow on its nightside, the side facing away from the Sun. New lab experiments re-created the environment of Europa and find that the icy moon shines, even on its nightside, due to an ice glow. As Jupiter bombards Europa with radiation, the electrons penetrate the surface, energizing the molecules underneath. When those molecules relax, they release energy as visible light. Variations in the glow and the color of the glow itself could reveal information about the composition of ice on Europa’s surface. Different salty compounds react differently to the radiation and emit their own unique glimmer. Color will vary based on the real composition of Europa’s surface. Credit: NASA/JPL-Caltech.

The process seems straightforward, but sometimes it takes replicating known conditions as closely as possible in a lab to discover the consequences. Start with ice mixed with salts like magnesium sulfate and sodium chloride. Bathe the mix in radiation. The glow is a natural result, its variations linked to different compositions of the ice. Those variations are what gives this work implications for missions like Europa Clipper.

Sodium chloride brine, for example, turned out to produce a lower level of glow in the team’s setup, which used an instrument built at JPL known delightfully as ICE-HEART (Ice Chamber for Europa’s High-Energy Electron and Radiation Environment Testing). The experiments were run at a high-energy electron beam facility in Gaithersburg, Maryland once ICE-HEART had been taken there, the original plan being to study organic material under the Europan ice. The continuous glow on Europa’s night side now emerges as a source of future data, one that can be compared with these laboratory results to identify salty components on the surface.

“It’s not often that you’re in a lab and say, ‘We might find this when we get there,'” Gudipati said. “Usually it’s the other way around – you go there and find something and try to explain it in the lab. But our prediction goes back to a simple observation, and that’s what science is about.”

So Europa Clipper can use night-time flybys to delve into the chemical composition below, a method that may turn out to be helpful on other Galilean moons, or wherever high doses of ionizing radiation sleet down upon a frozen surface. Specific to Europa Clipper’s instruments, we learn the following:

Observation of night-time, high-energy, radiation-induced ice glow on the trailing hemisphere could thus provide more constraints on the chemical composition of non-ice material, revealing whether sulfates or chlorides are present, what their counterions could be, and whether pure water-ice patches are detectable. Dark regions could imply sodium- and chloride-dominant surfaces, whereas brighter regions could imply magnesium- and sulfate-dominant surfaces in the absence of water ice. The presence or absence of water ice could unambiguously be determined by the MISE [Mapping Imaging Spectrometer for Europa] instrument, designed to span a wavelength range of 0.8 μm to 5 μm, covering ice absorption features in the daytime.

In addition, the glow of night-time ice can be measured against daylight observations from Europa Clipper’s Wide Angle Camera and the MISE spectrometer to dig deeper into the chemical composition below. Some ultraviolet features of the night-time spectra will allow mission scientists to flag temperature anomalies on the surface for future observations.

Next post: An Unusual (and Promising) Brown Dwarf Detection