The naming of names is quite a project when it comes to new astronomical objects, and given the sheer numbers — 300 million habitable planets around G- and K-class stars, for example — we might do better to stick with simple identifiers. On the other hand, it’s a bit charming that a new brown dwarf known by its identifier as BDR J1750+3809 has been dubbed ‘Elegast’ by the discovery team. This is the first substellar object found through radio observations.

The name is both appropriate and specific to the discovery space. Elegast appears in a poem in Middle Dutch (12th or 13th Century) called ‘Karel ende Elegast,’ with the character Elegast being a vassal of Charlemagne who seems to be king of the elves (Wikipedia to the rescue, vindicating once again my decision to send them a monthly donation).

The Dutch connection is that the radio work comes out of LOFAR (Low-Frequency Array), which is currently the largest radio telescope operating at the lowest frequencies that we can observe from Earth. Based in the Netherlands, LOFAR is an international effort with field stations in eight countries.

Elegast breaks from the norm in not being discovered from the kind of infrared sky surveys through which most other brown dwarfs have been found. You might recall our discussions of the WISE mission and the possibility, not realized, of finding a brown dwarf closer than the Alpha Centauri stars. But it’s also true that infrared surveys can’t detect objects that are sufficiently cold and faint, whereas we now have radio wavelengths to fill the gap.

Is there still some faint possibility of a closer brown dwarf? T-class dwarfs are defined as being less than 1500 Kelvin, but WISE identified Y-dwarfs with temperatures as cool as 25 °C (298 K), which gets us down to where my thermostat is set as I write this. WISE 1828+2650, I subsequently learned, is so cold that it emits no visible light at all and is more or less indistinguishable from a free-floating planet. Get any colder and infrared surveys won’t find such worlds, which is why the news about Elegast is so encouraging.

Given that the population of so-called ‘rogue’ planets may be vast, it’s wonderful to see a new method becoming available with which to study nearby examples. Brown dwarfs may not be able to create the kind of fusion reactions found in stars like the Sun, but they emit at radio wavelengths just as gas giant planets do. Jupiter’s emissions are well studied, the result of powerful magnetic fields around the planet accelerating charged particles to produce radio waves as well as aurorae. Brown dwarfs are faint at these wavelengths but detectable. 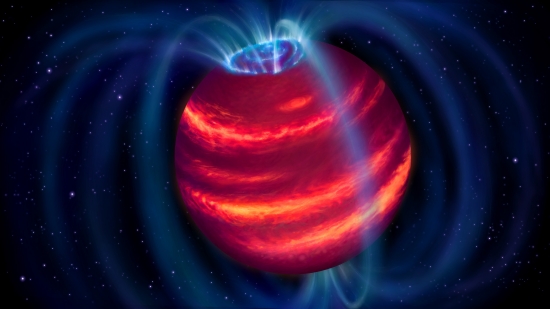 The LOFAR observations had to contend with background galaxies when investigating potential brown dwarfs. The key turned out to be identifying signals that were circularly polarized, which distinguishes planets and brown dwarfs from the background ‘noise.’ What this kind of polarization means is that the electromagnetic field of the radio waves rotates in a characteristic circular pattern. Says LOFAR project scientist Tim Shimwell: “We could not have picked out Elegast in our standard radio images from among the crowd of millions of galaxies, but Elegast immediately stood out when we made circularly polarised images.”

In the case of Elegast, the Gemini-North Telescope had produced archival imagery used to confirm the discovery, and the NASA Infrared Telescope Facility (IRTF) deployed an infrared spectrometer known as SpeX, recently upgraded, to obtain a spectrum of Elegast. The signature of methane, common in brown dwarfs and gas giant planets, was revealed.

Beyond its possibilities at identifying the faintest brown dwarfs and free-floating planets, radio astronomy may also be used to study exoplanet magnetic fields, testing theories on magnetic field strength on objects that have enough similarities to gas giants to make the investigation worthwhile. The team is now making follow-up observations on Elegast to measure its magnetic field even as they use LOFAR to look for more such objects. Harish Vedantham, an astronomer at the Netherlands Institute for Radio Astronomy (ASTRON) is lead author of the study:

“Our ultimate goal is to understand magnetism in exoplanets and how it impacts their ability to host life. Because magnetic phenomena of cold brown dwarfs like Elegast are so similar to what is seen on solar system planets, we expect our work to provide a vital datapoint to test theoretical models that predict the magnetic fields of extrasolar bodies.”