A planetary dynamo may be a key factor in creating the conditions needed for life. And creating that dynamo seems to depend on the radioactive decay of thorium and uranium, generating internal heating and driving plate tectonics. Let’s carry this line of thought further, though, as the authors of a new paper out of UC-Santa Cruz do, and point out that these heavy elements are necessary to create a magnetic field like Earth’s, which protects us from damaging radiation.

In the rocky planets, magnetic fields are generated by convection in a metallic core, which in turn is driven by heat extracted into the mantle (Nimmo 2015; Labrosse 2015; Boujibar et al. 2020). Since mantle radiogenic heat production controls how much heat is extracted from the core, it will also influence the presence or absence of a dynamo. Similarly, heat production will control the mantle temperature and thus the rate of silicate melting and volcanism.

That quote is from the paper, whose lead author is Francis Nimmo, and it points to the key role of radiogenic heat in the mantle. Within the Earth, there are enough radioactive elements to generate a persistent ‘geodynamo,’ in which molten iron and nickel in motion in the planet’s outer core produce electric currents, forming a magnetic field as the Earth rotates. The authors find that Earth “had just enough radiogenic heating to maintain a persistent dynamo.” And that has implications for the atmosphere.

UC-Santa Cruz’ Natalie Batalha is director of the university’s Astrobiology Initiative, whose multidisciplinary work is designed to produce the kind of widespread collaboration found in this paper. Says Batalha:

“It has long been speculated that internal heating drives plate tectonics, which creates carbon cycling and geological activity like volcanism, which produces an atmosphere. And the ability to retain an atmosphere is related to the magnetic field, which is also driven by internal heating.”

To ponder how all these effects come together, we have only to look at Mars, where the lack of a magnetic field can be tied to the gradual loss of an atmosphere that was once thick enough to support water on the surface and, potentially, a living environment. The planet’s low gravity was one factor in the gradual thinning of the atmosphere, but the solar wind of charged particles from the Sun is likewise a problem, for without a protective magnetic field, the atmosphere erodes.

We have an angle here into habitability on planets around other stars, for the amount of radioactive material is going to vary from one stellar system to another. The so-called r-process elements — created by nuclear reactions that are responsible for producing roughly half of the atomic nuclei heavier than iron — owe their origin to supernova events and the mergers of neutron star remnants, events that will be stochastic and result in planets with varying degrees of radiogenic materials. Back to the paper on this point:

From the point of view of long-term radiogenic heating, the most important elements are potassium, thorium, and uranium. Th and U are both r-process elements, most likely produced in neutron star mergers (NSMs) (Kasen et al. 2017; Cowan et al. 2019), with possibly significant contributions also from massive star collapse explosions (Siegel et al. 2019; Macias & Ramirez-Ruiz 2019). Because such events are rare (an occurrence rate of tens/Myr in our Galaxy) and produce large quantities of r-process elements, the resulting concentration of r-process elements should vary considerably. This is especially true of low-metallicity stars, because turbulent mixing of the interstellar medium is inefficient in the early Galaxy (Shen et al. 2015; Naiman et al. 2018). This expectation is in agreement with measurements of r-process europium in low-metallicity stars (e.g., Macias & Ramirez-Ruiz 2018) and with r-process abundances in dwarf galaxies (e.g., Ji et al. 2016).

Lead author Francis Nimmo realized that if planets vary in the amount of radioactive elements, we should then expect geological activity and magnetic fields to vary as well. The UC-Santa Cruz scientists essentially adjusted radiogenic heat production in their models to see how this factor affected planetary habitability. As Nimmo puts it:

“We took a model of the Earth and dialed the amount of internal radiogenic heat production up and down to see what happens. Just by changing this one variable, you sweep through these different scenarios, from geologically dead to Earth-like to extremely volcanic without a dynamo.”

When radiogenic heating is dialed up higher than the Earth’s, no dynamo is produced. With most of the thorium and uranium in the mantle, the excessive heat becomes an insulator, so that the loss of heat from the molten core is slowed. The result: Heat loss from the core cannot generate convection strong enough to produce a magnetic field, with all that implies about the survival of an atmosphere and radiation flux on the surface.

Given all that, the associated volcanic activity produced by greater levels of radiogenic internal heating is almost lost in the shuffle, but it could obviously be a factor in mass extinction events. And while that implies that high levels of radiogenic heating are a key factor in suppressing a habitable environment, the study also shows that too little heat results in no volcanism whatsoever. We wind up with a planet that, like Mars, appears geologically dead. 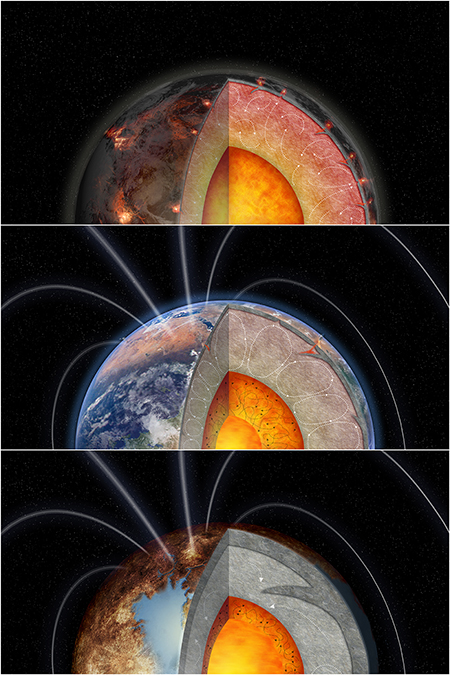 A new study identifies internal heating from radioactive decay as a critical factor in a planet’s ability to generate a magnetic field and retain an atmosphere. Credit: Illustration by Melissa Weiss for UC Santa Cruz

Image: These illustrations show three versions of a rocky planet with different amounts of internal heating from radioactive elements. The middle planet is Earth-like, with plate tectonics and an internal dynamo generating a magnetic field. The top planet, with more radiogenic heating, has extreme volcanism but no dynamo or magnetic field. The bottom planet, with less radiogenic heating, is geologically “dead,” with no volcanism. Caption credit: UC-Santa Cruz.

So we are working with a single variable, one that can be studied via spectroscopy to measure the abundance of the various elements in stars, the assumption being that planets will have the same composition as the stars they orbit. Here the rare earth element europium comes into play, readily observed in stellar spectra, and created by the same processes that produce thorium and uranium. In this work, europium is the tracer for studying radiogenic abundance.

We already have europium measurements for many nearby stars, which allowed Nimmo and team to set a range of inputs for their models of radiogenic heating, with the Sun’s composition establishing the middle of the range. Europium thus becomes a measurement that can flag radiogenic elements in exoplanetary systems as we look forward to the deployment of the James Webb Space Telescope. The europium measurement may well show us which stellar systems are likely to produce planets with the internal composition life would need to survive. From the paper:

…higher mantle heating rates increase volcanic activity and shut off the dynamo, both likely deleterious for habitability. In contrast, reduced mantle heating rates will at some point stop melt production. A potential consequence is that plate tectonics will then cease (Louren¸co et al. 2018), and with it, the dynamo, as at Venus (Nimmo 2002). It is tempting to speculate that the Earth is habitable in part because it possesses a “Goldilocks” concentration of radiogenic elements: high enough to permit long-lived dynamo activity and plate tectonics, but not so much that extreme volcanism and dynamo shutoff occur. As yet, however, our understanding of the complicated feedbacks involved is too rudimentary to make such a definitive conclusion; more detailed calculations, and better characterization of the radiogenic element abundances in planet-hosting stars, are both required.

Next post: A New Source for Plumes on Europa