A New Source for Plumes on Europa

How salty should we expect the ice on Europa’s surface to be? It would be helpful to know, because the salinity of the surface will be a factor in how transparent the ice shell is to radar waves. Europa Clipper will fly with an instrument called REASON — Radar for Europa Assessment and Sounding: Ocean to Near-surface — which will be investigating both the surface ice and the ocean beneath. Recent research, in which its principal investigator, Don Blankenship (University of Texas), is involved is offering insights into the salinity of the ice.

Here’s a bit of background on REASON from a NASA page on Europa Clipper:

Depending on their wavelength, radio waves can either bounce off or penetrate different materials. REASON will use high frequency (HF) and very high frequency (VHF) radio signals to penetrate up to 18 miles (30 kilometers) into Europa’s ice to look for the moon’s suspected ocean, measure ice thickness, and better understand the icy shell’s structure. The instrument will also study the elevation, composition, and roughness of Europa’s surface, and will search Europa’s upper atmosphere for signs of plume activity. 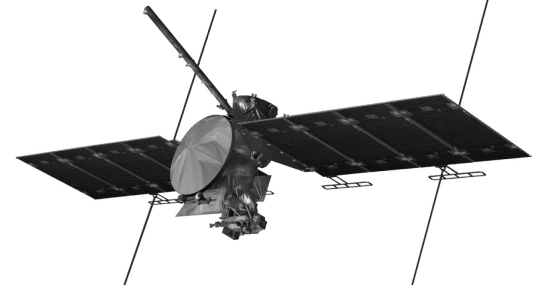 So plumes are in play for Europa Clipper, and the new research finds evidence of a process that can produce them. The paper in Geophysical Research Letters focuses on what the authors call brine migration, in which small pockets of salty water migrate within the ice to warmer icy areas. We get into questions of salinity in this work because migration of icy brines, analyzed here through study of the impact crater Manannán, may have resulted in the creation of a plume. Imaging data from the Galileo mission allowed the team to study the resulting surface feature and to calculate that Europa’s ocean is about a fifth as salty as Earth’s.

But let’s back up to that plume. If eruptions from the ocean below periodically break through the ice, we might have a way to sample ocean materials without ever trying to drill through the surface shell. The new work, led by Gregor Steinbrügge (Stanford University) homes in on Manannán, a 30-kilometer wide crater on Europa that is the result of an impact some tens of millions of years ago. The paper models the melting and refreezing of water following the event. And it suggests that not all plumes carry materials from the ocean below.

Manannán is located on Europa’s trailing hemisphere at 3°0’N and 120°50’E. The crater was imaged by the Galileo spacecraft’s Near-Infrared Mapping Spectrometer. Subsequent geological mapping of Manannán has shown what appear to be impact melt materials filling the crater floor, along with ejecta deposits that would have been brought up from below at the time of impact.

According to the researchers, as water transformed back into ice following the impact, pockets of water with higher salt content were created in the surface, migrating sideways through the shell by melting adjacent areas of less salty ice. “We developed a way that a water pocket can move laterally – and that’s very important,” says Steinbrügge. “It can move along thermal gradients, from cold to warm, and not only in the down direction as pulled by gravity.” 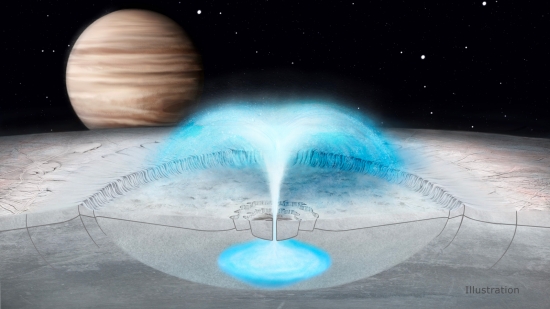 Image: This illustration of Jupiter’s icy moon Europa depicts a cryovolcanic eruption in which brine from within the icy shell could blast into space. A new model proposing this process may also shed light on plumes on other icy bodies. Credit: Justice Wainwright.

Pockets of brine moving about within the surface become saltier as they move through less salty water around them and eventually erupt, according to this model, which shows freezing and pressurization as the factors leading to a cryovolcanic event. At Manannán crater, a migrating brine pocket finally freezing at the center generated a plume estimated to be 1-2 kilometers high, leaving a surface feature, roughly spider-like in shape, that turned up in the Galileo data. The spider-shaped fractures consist of 17 segments, surrounded by a series of concentric faults. This would have been a relatively small plume, and the Manannán findings do not explain what may be larger plumes hypothesized based on Hubble and Galileo data. 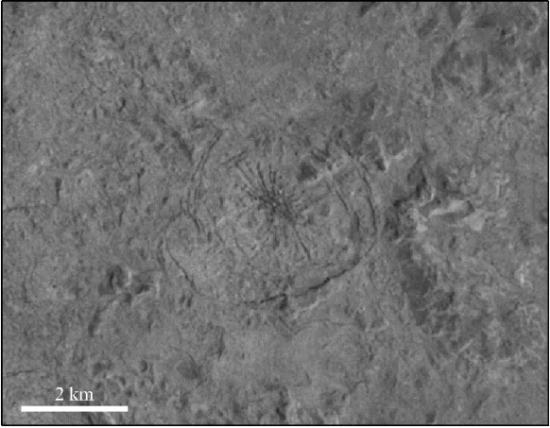 The point is that brine pocket migration is a surface phenomenon that can generate plumes, implying that such plumes do not require a connection with the ocean beneath. Whether there are other, larger plumes that do make such connections has not yet been determined.

Oceanic origin or not, all of this makes Europa’s surface an even more dynamic place than we’ve been considering, while somewhat tempering our expectations for astrobiology in plume activity even as we continue to observe the moon for future, perhaps much larger plumes. The team’s modeling of how melting and subsequent freezing of a water pocket within the icy shell would produce an eruption should have implications for other icy bodies within the Solar System. Robert Pappalardo (JPL) is a project scientist on the Europa Clipper mission:

“The work is exciting, because it supports the growing body of research showing there could be multiple kinds of plumes on Europa. Understanding plumes and their possible sources strongly contributes to Europa Clipper’s goal to investigate Europa’s habitability.”