The world’s largest superconducting camera by pixel count has been deployed at the Subaru Telescope at Mauna Kea in Hawaii. This is a technology we’ll want to watch, for it assists the effort to image exoplanets directly from the surface of the Earth, a goal that not so long ago would have seemed impossible. But it can be done, and we have a new generation of extremely large telescopes (ELTs) on the way, so the progress in support technology for such installations is heartening.

The new device is called the MKID Exoplanet Camera (MEC), with the four-letter acronym standing for Microwave Kinetic Inductance Detector. A superconducting photon detector was first developed as far back as 2003 at Caltech and the Jet Propulsion Laboratory, paving the way for devices that can operate at wavelengths ranging from the far-infrared to X-rays. The MEC comes out of the laboratory of Ben Mazin at the University of California at Santa Barbara as part of an effort that includes contributions from both US and Japanese scientists.

The MKID Exoplanet Camera operates in the optical and near infrared, running at 90 millikelvin, or 1/1000th of a Kelvin, which is close to absolute zero. The technology involved can read out data thousands of times per second, according to the MEC’s developers, which plays directly into the success of adaptive optics systems that are designed to correct for atmospheric distortions. Current adaptive optics methods bend a telescope’s mirror at a rate of thousands of times per second, using complex algorithms to produce an image as it if were taken in space.

The problem: Planets most likely to be found with today’s adaptive optics are young worlds still glowing with the heat of their formation. Mazin points to HR 8799, a system with four gas giants, each of which is more massive than Jupiter, as the kind of catch currently available, and indeed, HR 8799 has been confirmed by direct imaging with the Keck and Gemini telescopes in Hawaii. The planets are still hot and glowing as the system matures. Moving into the range of smaller, cooler worlds will take exquisite collaboration between adaptive optics and the camera.

The MKID technology allows Mazin’s MEC to determine the energy of each photon as it hits the detector. Sarah Steiger is a UC-Santa Barbara doctoral student who worked on the project:

“This allows us not only to determine a planet’s brightness, but also to get a spectrum (the brightness as a function of energy), which can reveal additional information about an exoplanet’s properties, such as its age, mass and potentially atmospheric composition.” 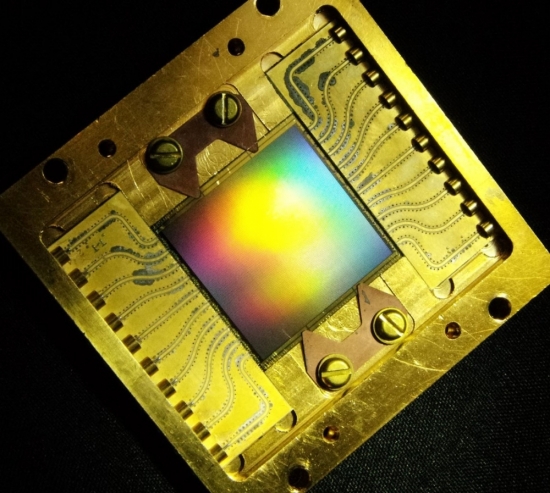 The fast data rates available with an MKID mean that the technology can work interactively with an observatory’s adaptive optics system to remove scattered and diffracted starlight, which allows the detection of exoplanets much fainter than can currently be imaged. In terms of astrobiology, says Olivier Guyon, that means we can one day turn the MEC to nearby exoplanets that can be characterized in greater detail than before. Guyon is the project scientist in charge of the Subaru Coronagraphic Extreme Adaptive Optics (SCExAO) instrument:

“We’re not going to be able to do that with Subaru, or with any of the current telescopes, because they’re just a bit too small. But we’re preparing for the next big step, which is to deploy exoplanet imaging cameras on larger telescopes such as the Thirty Meter Telescope. When those telescopes come online, the same technologies, the same camera, the same tricks will allow us to actually look for life.”

Ahead for Mazin’s team is the refinement of the software and algorithms that make MEC effective, with fast optical correction being the focus for the next several years. For more on the camera and its ongoing development, see Walter et al., “The MKID Exoplanet Camera for Subaru SCExAO,” Publications of the Astronomical Society of the Pacific Vol. 132, No. 1018 (17 November 2020). Abstract.