A Centaur in Transformation

There was a time when the Solar System seemed relatively well defined, with nine planets including Pluto and an asteroid belt that orbited in a niche between Mars and Jupiter. These days, in addition to the Kuiper Belt and Oort Cloud, we have to factor in all the objects that move on unusual orbits. We have a mission in the works, called Lucy, to the Jupiter Trojans, those asteroids that share the giant planet’s orbit around the Sun. And today we’re looking at Centaurs, which cross the orbits of giant planets and are in rapid dynamical evolution.

The subject comes up because a newly discovered comet — 2019 LD2 (ATLAS) — is not only a Centaur, but a Centaur that is rapidly on its way to becoming another class of object, a Jupiter Family Comet (JFC). The latter are short-period comets with an orbital period of less than 20 years, largely under the influence of Jupiter. A paper by Jordan Steckloff (Planetary Science Institute) and team lays out the case: Centaurs are objects in transition. 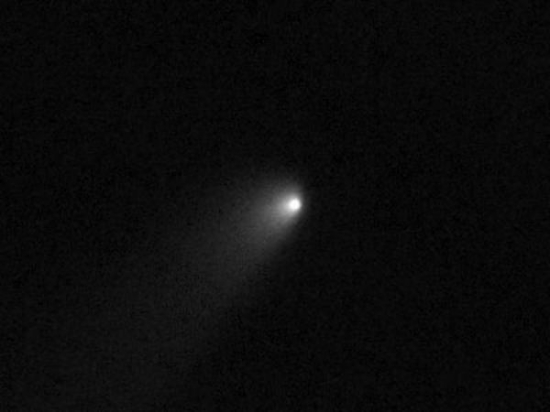 According to the paper, the new comet is in the earliest parts of a transition that is common to Centaurs. Their orbits, between Jupiter and Neptune, are unstable. Their fate takes them in one of two directions: They may be ejected from the Solar System entirely, or they may evolve into Jupiter Family Comets. They first emerge beyond the orbit of Neptune, putting them into the category of trans-Neptunian Objects, with gravitational interactions in the outer system pulling them into the population of Centaurs.

The transition to Jupiter Family Comet is, in astronomical terms, a fleeting affair, lasting from a few million to a few tens of millions of years, according to the researchers. And tracing their evolution produces what the authors refer to as a ‘gateway’ that helps them make the transition into JFC status. Thus Steckloff:

“We find that 2019 LD2 is currently in the vicinity of a dynamical ‘Gateway’ that facilitates the majority of transitions from the Centaur population into the Jupiter Family of Comets. The dynamical gateway is a region beyond Jupiter, extending to just inside of Saturn’s influence. Our previous work (Sarid et al. 2019) found that the majority of JFCs first pass through this dynamical gateway as Centaurs immediately prior to transitioning into the JFC population; indeed this ‘Gateway Region’ facilitates the majority of transitions between the JFC and Centaur populations. Currently, there are a handful of objects in the gateway, including LD2, and the much more famous object 29P/Schwassmann-Wachmann 1.”

Let’s pull up short for a moment with that last reference. 29P/Schwassmann-Wachmann 1, known since the 1920s, displays frequent outbursts that cause a sudden change in magnitude, brightening in some cases as much as a thousand times. The outbursts are sudden and tend to fade within days, evidently the result of cryovolcanic activity. Like 2019 LD2, 29P/Schwassmann-Wachmann 1 is a Centaur in transition into a Jupiter Family Comet.

The presence of super-volatile ices on 2019 LD2 points to the pristine nature of the object, which according to Steckloff is unlikely ever to have been in the inner Solar System. Here we are looking at a comet whose ices are subliming for the first time, driving cometary activity. The astronomer says this will be a rapid process: “…this transition is likely to finish in only 40 years from now, which is a blink of an eye for astronomy. This means that people alive today will be able to follow this object all the way through its transition into the JFC population.”

As part of that change in perspective that has taught us so much about the wide range of outer system objects, we’re learning that our definitions have to be malleable enough to incorporate objects that, on the range from active comets to inactive asteroids, can take on characteristics of either, presenting different aspects as they proceed through this dynamical evolution. Fast-changing 2019 LD2 is a chance to witness such change within our lifetimes.

Next post: Musings on Fusion and the Interstellar Ramjet