In the early summer of 2005, I found myself, thanks to the efforts of Greg Matloff and Princeton’s Ed Belbruno, in Princeton for a conference called New Trends in Astrodynamics and Applications II, which Dr. Belbruno had organized. I was to give a brief talk at the end of the session summarizing what was going on in the interstellar travel community. Two days of chill rain didn’t dampen my enthusiasm at seeing Greg and his wife, the artist C Bangs, as well as Belbruno himself, who had been a great help as I put together my Centauri Dreams book. And on the morning of the first day of the conference, I joined Greg, C and Claudio Maccone for breakfast at the Nassau Inn, Princeton’s lovely colonial era hostelry.

I’ve since had the opportunity to talk with Dr. Maccone many times at conferences, and one year enjoyed memorable meals with him in the Italian Alps, but that first encounter really sticks in my mind. I had been thinking about gravitational lensing for several years, but it was only through studying Maccone’s writings that I began to fathom what the idea represented. Suddenly I found myself having breakfast with the man who had made a mission to the Sun’s gravitational lens a cornerstone of his professional life. What a way to start the Princeton conference!

Here was an opportunity offered up by nature to achieve extraordinary magnifications. It would be a natural lensing available to any civilization that could reach the gravity focus of its star, which for the Sun means about 550 AU. As the focal line extends to infinity, studies at various wavelengths are enabled as the spacecraft continues its departure from the Solar System. 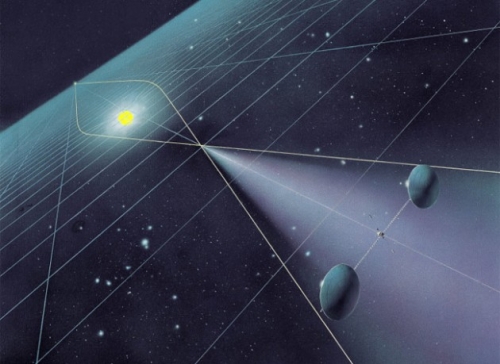 Image: The FOCAL mission as described by Claudio Maccone in his 2009 book Deep Space Flight and Communications (Springer).

Let’s dwell on that a moment. The goal in a mission to the gravitational lens — Maccone calls the concept FOCAL, which is what I will use as we talk about the topic in the next few days — would not be to reach 550 AU and stay there. The gravitational focus is not like an optical lens, where light diverges after the focus. Instead, as light from the other side of the Sun is focused by the Sun’s gravitational field, it remains fixed along the focal axis. Every point along the straight line trajectory beyond 550 AU remains a focal point.

So if you want to image a target, you move toward 550 AU precisely opposite to the target you want to image, putting the Sun between you and it. Think Alpha Centauri, for example, where a close look at Proxima Centauri b would be exceedingly useful as projects like Breakthrough Starshot ponder sending probes there. The gain for optical radiation from the planet would be amplified by a factor of 1011. Now think of the uses not just in imaging but in astronomy at a wide range of wavelengths. FOCAL would be a true interstellar precursor.

Assuming, of course, that you could untangle the image. The planet we want to study is, after all, spread out into an Einstein ring surrounding the Sun. More on this in a moment.

Beyond imaging, the communications potential for the gravity lens is intriguing and enabling. I’ll pause to note that the history of gravitational lens mission ideas even includes a SETI aspect. Back in the 1990s, drawing on work at the Italian aerospace company Alenia Spazio, Greg Matloff examined an inflatable radio telescope called Quasat, which became the subject of regular meetings in that decade. All this ties in with the extensive Italian investigation of solar sail ideas that I’ve discussed before in these pages, work informed by the efforts of physicists like Giovanni Vulpetti, Maccone himself, Giancarlo Genta, and the continuing work of Matloff.

Matloff explored solar sailing to reach the gravitational focus in a 1994 paper (“Solar Sailing for Radio Astronomy and SETI: An Extrasolar Mission to 550 AU,” Journal of the British Interplanetary Society Vol. 47, pp. 476-484), where sails enabled placement of a probe at the gravity lens whose observations ranged through radio astronomy and into SETI.

I mentioned Von Eshleman’s work back in the 1970s, which to my knowledge was the first time anyone proposed an actual mission to 550 AU and beyond to study the Sun’s gravitational lens. It took just over a decade for the concept to take deep root and spawn a mission concept.

For it was in 1992 that Claudio Maccone began discussing a FOCAL mission at a conference in Torino, and in 1993 he went on to submit a formal proposal to the European Space Agency for the funding needed to firm up a mission design. Meanwhile, he was identifying issues that needed to be addressed. The 550 AU distance may be a bare minimum, given the problem of distortion caused by the Sun’s corona. But the farther the probe travels from the Sun, the less the coronal effect, and with a focal line extending to infinity, we have room to maneuver.

A FOCAL mission is quite an interesting problem for spacecraft design, one that Maccone subsequently addressed in his Deep Space Flight and Communications (Springer, 2009). There he advocated using tethers to deploy two antennae, each tether several kilometers in length, allowing a larger, more detailed field of view than one provided by a single antenna. If these methods work, we still have a very difficult image to untangle. Potentially, we could look at details on a planetary surface even at the distance of Proxima b, studying these with a mission that is 278 times closer than the actual distance to the target. But about that image…

Geoffrey Landis has analyzed the problems we’ll face in using the Sun as a ‘gravitational telescope’ when trying to image the surface of an exoplanet. The issues are manifold, and include pointing and focal length at these magnifications, signal-to-noise ratio involving the Sun’s corona, and what he calls ‘focal blur,’ which seems inherent in the nature of gravitational lensing. All of this in a significant paper titled “Mission to the Gravitational Focus of the Sun: A Critical Analysis,” which addresses matters that are also being examined in NASA’s latest NIAC study. JPL’s Slava Turyshev is principal investigator on that one, an unusual Phase III grant called “Direct Multipixel Imaging and Spectroscopy of an Exoplanet with a Solar Gravitational Lens Mission.” The concept has already gone through two prior rounds of development. 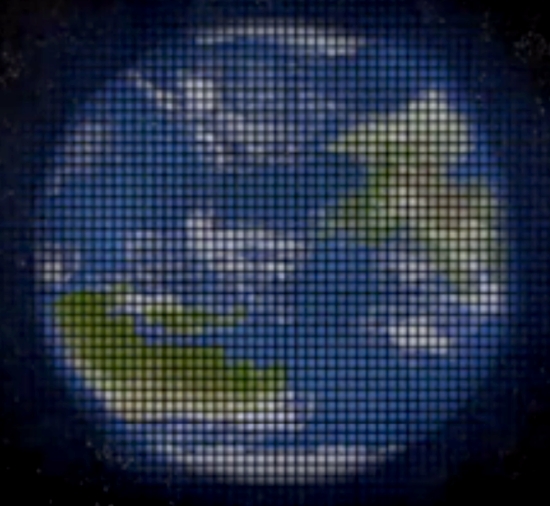 But I’m getting ahead of myself, and deep into unknowns under current investigation. Let’s talk in the next post, then, about using the gravitational lens for communications. It’s a fascinating option for efforts like Breakthrough Starshot, in which getting a signal back to Earth from tiny payloads is an obvious concern. Just what, then, is a radio bridge, and how does Claudio Maccone hope to use one to put a significantly different spin on missions like Starshot? I’ll also have thoughts on the NASA effort and the continuing mission design within NIAC.

Note: Geoffrey Landis also presented a later version of his work on the lens in a 2017 conference paper for the Tennessee Valley Interstellar Workshop, “A Telescope at the Solar Gravitational Lens: Problems and Solutions” (full text). This paper, along with another by Slava Turyshev on imaging issues, is also available in the conference’s proceedings volume.