Getting a probe to another star is a big enough problem, but woven inextricably through it is the issue of communications. Adding payload steepens the propulsion curve in dramatic fashion, which is why recent thinking has dwelled so firmly on miniaturizing the spacecraft. Thus Breakthrough Starshot, which envisions payloads roughly on the order of a computer chip. No wonder, with spacecraft of that size, getting data back to Earth is such a daunting challenge.

Can gravitational lensing help? We’ve seen that the Sun’s mass shapes spacetime around it, bending light from targets on the other side so that electromagnetic waves come to a focal point about 550 AU out. The implications for imaging are under intense study at the Jet Propulsion Laboratory, where Slava Turyshev’s team, working with a Phase III NIAC grant, is exploring “Direct Multipixel Imaging and Spectroscopy of an Exoplanet with a Solar Gravitational Lens Mission,” taking two prior studies, a Phase I and II at NIAC, forward in terms of imaging.

But if we can fight off solar corona effects and achieve a signal-to-noise ratio high enough — Turyshev believes this is possible — we might do more than reconstructing an exoplanet image with 25-kilometer scale surface resolution. Such an image would help us understand the target for future interstellar probes, but Claudio Maccone has been writing about using the same lensing effect to boost communications in dramatic fashion. And if Starshot’s payloads might have little more than a cellphone’s available power, such levels might prove workable.

The Gravitational Lens as Relay

How is this possible? There are a lot of issues here, but we can start with Bit Error Rate, which has to do with the quality of a signal. Specifically, BER is the number of erroneous bits received divided by the total number of bits transmitted. We can compare the Bit Error Rate across interstellar distances with and without the gravitational lens effect, as Maccone first did in a 2011 paper. I’m going to use that paper and his recent presentation to examine the results and what they mean for current thinking about missions.

Before we start miniaturizing, let’s assume a probe at Alpha Centauri communicating to Earth using a 12-meter antenna, a fairly conventional spacecraft working with a Deep Space Network-class antenna (a 70-meter dish) on the other end, trying to communicate over the Ka band (32 GHz), with a bit rate of 32 kpbs. These assumptions come from recent missions: The Ka band is the highest frequency used by Cassini, while the 32 kbps bit rate equals that of ESA’s Rosetta spacecraft. Maccone then goes on to assume transmitting power of 40 W.

The paper (citation below) is available in full text, so there is no need to go through the chain of reasoning in detail here. The point is that the signal is shown to be unusable. But matters change if we deploy a FOCAL mission to the Sun’s gravity lens. According to the paper’s equations, the same equipment now allows received power and acceptable Bit Error Rate at Alpha Centauri. Thus the figure below, which Maccone used in his online talk. 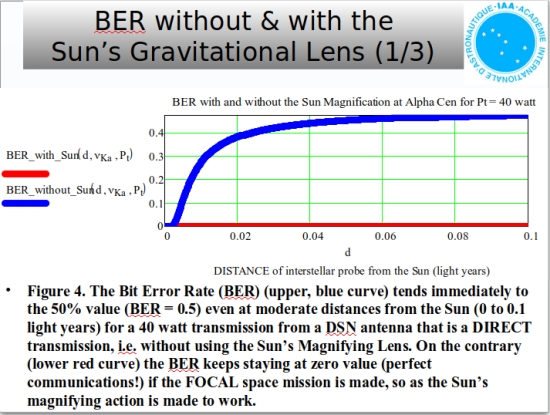 If we follow the equations through, we don’t begin to introduce significant errors until we’re fully 9 light years out, not far off the distance to Epsilon Eridani. By the time we get to a probe at a distance of 100 light years, we reach a level of Bit Error Rate high enough to swamp the dataflow with this equipment. A spacecraft using the Sun’s gravitational lens, then, can communicate effectively assuming present-day power levels and infrastructure with a probe at Alpha Centauri, making the target of 550 AU an enabler for data return from small payloads.

If Breakthrough Starshot had a gravitational lens relay of this kind, the daunting communications issue would be cast in a new light. Just how complicated communications matters are without a gravity lens relay is something I’ll soon explore with a look at the just released Request for Proposals from Breakthrough that deals explicitly with the question.

What is it that S.R. Hadden says in the film Contact? “The first rule of government spending: why build one, when you can build two, at twice the price?” This is where Claudio Maccone is suggesting a forward path for interstellar probes that looks at what we do next after our initial interstellar probes fly past their target. The Starshot model, for example, assumes a fleet of sail-driven craft flung past a nearby star like Proxima Centauri to collect and return an image of the planets there. This is a flyby concept. A few hours in-system and gone.

Flybys are first steps and, as New Horizons has recently shown so dramatically (not to mention a host of other craft, like Voyager in the past), we can collect invaluable data from them. But once we’ve achieved flybys around nearby stars, we’ll want to continue our explorations by establishing a robotic (or one day human, perhaps) presence there. Now we would like not just the relatively slow communications methods enabled by the gravitational lens of the Sun but a much faster capability. We achieve this by using a second lens, the one near our target star.

If we’re talking about a mission to Alpha Centauri, then we go to the gravitational lens of Centauri A because it has the highest mass of the three stars, and thus offers the highest gain. Here the FOCAL spacecraft would be placed at a minimum distance of 750 AU for communications and data retrieval from targets around any one of the three stars. We have a radio bridge with communications capabilities that can be achieved by no other means. Here is the image Maccone uses to illustrate the point, along with his own caption from the paper. 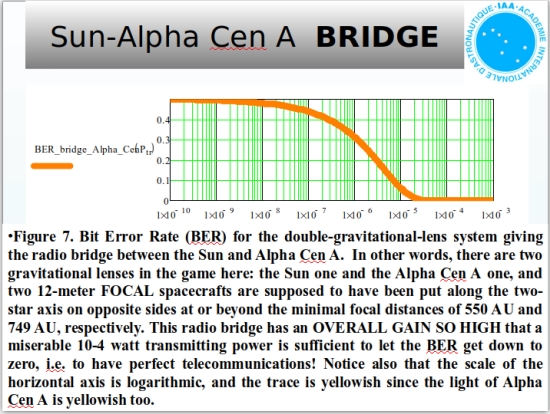 If we establish the radio bridge, our capabilities at error-free communications between the Sun and Alpha Centauri, assuming two 12-meter FOCAL antennae, become striking: The minimum transmitted power falls to 10-4 watts. One-tenth of a milliwatt does the job, creating error-free communications between spacecraft and Earth, meaning we have created a workable channel for future activities in the Alpha Centauri system, whether human or robotic.

To make it happen, an initial FOCAL mission becomes our communications relay, while a second FOCAL mission creates the radio bridge. Multiple human generations may separate the two projects; this is not a task for the impatient. But should we see it through, huge, power hungry communications systems aboard the spacecraft are not necessary, while communications with our growing infrastructure around nearby stars become robust and all but routine.

Building radio bridges is a huge challenge, assuming not only the capability of reaching and exploiting the Solar gravity lens, but eventually reaching another star not just with a flyby but with a craft capable of decelerating into the target system and positioning itself into the focal lens of the star there. The sequence may be straightforward: Use our Sun’s gravity lens to communicate with the first interstellar probes, then expand capability by setting up the second communications relay. But the implementation, like everything interstellar, pushes all our limits well beyond anything we have yet achieved. Which is why I love writing about all this.

Technologies both suggest and enable new uses that push beyond the currently possible. If there is one thing my continuing dreams of Alpha Centauri have taught me, it’s that thinking beyond our own personal limitations builds the groundwork for future generations.

The idea that we should think only of what we as individuals will benefit from misses the point of intellectual inquiry, and blunts the blade of discovery. So I applaud the efforts of those currently working the hard equations of reaching 550 AU, even though many of them will probably not see such a mission arrive. Being a part of the effort, emplacing cornerstones, is what counts.

Next post: JPL Work on a Gravitational Lensing Mission