Stellar Flares as an Aid to Life Detection

The interesting transient associated with Proxima Centauri and monitored by Breakthrough Listen reminds us of a key fact about red dwarf stars and the planets around them. Such stars, especially in their youth, are prone to high flare activity, meaning violent, unpredictable emissions that can deplete atmospheric gases like ozone. Even if the atmosphere survives strong stellar winds, the loss of ozone can lead to high levels of ultraviolet radiation reaching the surface and compromising any life there.

That stellar flares can be dramatic is captured in the image below, showing a filament eruption from the Sun and accompanying solar flares (credit: NASA/GSFC/SDO). As striking as the image is, it depicts activity on an older star less prone to strong flare activity than younger, smaller stars. We’re also fortunate in having the shield offered by Earth’s magnetic field, which can deflect the worst of the solar wind. Our G-class Sun lets us orbit at a comfortable distance, but planets in the habitable zones of M-class dwarfs are in tight orbits. Proxima Centauri b, for example, orbits its primary in a scant 11 days at a distance of 0.0485 AU. 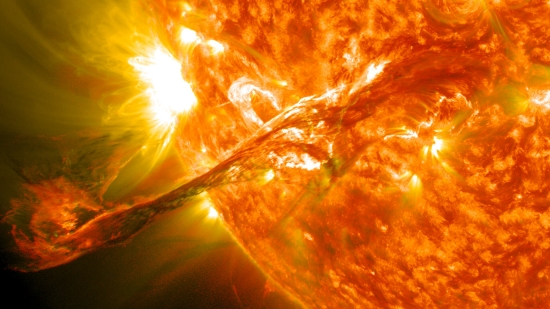 This may or may not be a deal-breaker for life, given evolutionary change that may force adaptations we can only imagine, but it certainly creates stark conditions for its formation. Even so, such activity may also provide us with opportunities when it comes to observing biosignatures. This morning I learned about a study from Northwestern University that takes a close look at stellar flares and the evolution of planetary atmospheres. We learn that flare activity can create atmospheric changes that actually make certain biosignatures more detectable.

Northwestern’s Howard Chen is lead author on the study:

What the Northwestern team has done is to combine a suite of three-dimensional coupled chemistry–climate model simulations with observed flare activity from a variety of stars. The scientists examined planet scenarios with varying rotation period, magnetic field strength and flare frequency, showing that recurring flares drive the atmospheres of planets around both K- and M-class stars “into chemical equilibria that substantially deviate from their pre-flare regimes, whereas the atmospheres of G dwarf planets quickly return to their baseline states.”

We should be able to use this fact to our advantage. Flares may help us see otherwise undetectable atmospheric components like nitrogen dioxide, nitrous oxide and nitric acid, which the paper describes as “bio-indicating chemical species.” Nearby red dwarfs, already useful because of their transit depth (a big planet passing in front of a small star is readily seen) now offer new ways to hunt biosignatures as next-generation space telescopes come online.

The study examines planets within the habitable zones of M- and K-class stars, where the habitable zones are smaller and the stellar activity more frequent. Tidally locked planets in this setting, with one face turned toward their star at all times, may lack the magnetic fields needed to deflect their stellar winds. The researchers used flare data from TESS, NASA’s Transiting Exoplanet Survey Satellite, in adjusting their simulations. From the paper:

For all scenarios, we find that flaring produces the largest magnitude alteration in nitrous oxide (N2O), a biosignature… Both HNO3 and H2Ov mixing ratios are enhanced on average by two to three orders of magnitude and the enhancements are maintained with repeated flaring in the K- and M-star planet scenarios… In contrast, CH4 experiences stronger removal via reaction with ion-derived OH during flaring, leading to lower temporal-mean CH4 mixing ratios (not shown). These results suggest that although biosignatures such as CH4 are vulnerable to destruction during periods of strong flaring, bio-indicating ‘beacon of life’ species could be prominently highlighted. 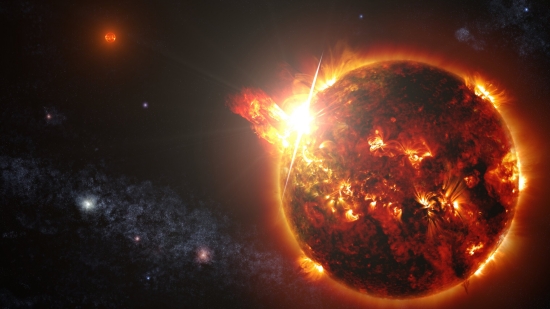 Published in Nature Astronomy, the research includes contributions from researchers at the University of Colorado at Boulder, the University of Chicago, Massachusetts Institute of Technology and NASA’s Nexus for Exoplanet System Science (NExSS).

Notice that we are increasingly studying exoplanet atmospheres in relation to space weather in the host star’s vicinity. Understanding how the signatures of chemical components vary with stellar activity like coronal mass ejections and flares — and in particular what the observational consequences may be — will help us shape the observing campaigns of future instruments, with consequences for detecting biosignatures.