The news that NASA will extend the InSight mission on Mars for two years, taking it through December of 2022, is not surprising, given the data trove the mission team has collected through operation of the mission seismometer. A live asset on Mars also deepens our knowledge of the planet’s atmosphere and magnetic field, all reasons enough for pushing for another two years. But the extension of the Juno mission to Jupiter deserves more attention than it’s getting, given that Juno’s remit will be expanded deep into the Jovian system. 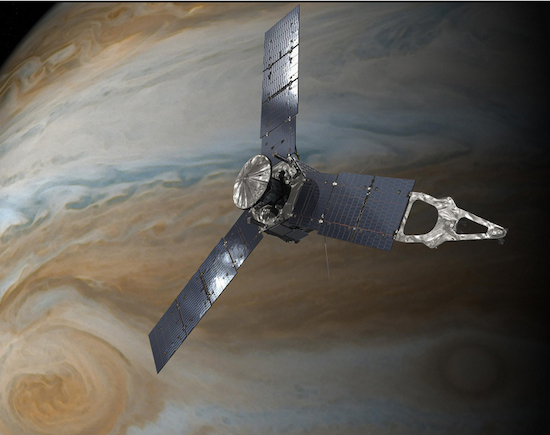 Image: NASA has extended both the Juno mission at Jupiter through September 2025 and the InSight mission at Mars through December 2022. Credit: NASA/JPL-Caltech.

For those of us fascinated with the outer system, this is good news indeed. I’m looking over two documents, the first being a presentation based on a report submitted to NASA’ Outer Planets Assessment Group (thanks to Ashley Baldwin for passing this along). The OPAG document was produced by Scott Bolton (Southwest Research Institute); it gives the overview of what a mission extension could look like. Also on my desk this morning is the text of the 2020 Planetary Missions Senior Review (PMSR), outlining a set of three mission scenarios. The context of both analyses is the success of the mission in studying Jupiter’s interior structure, magnetic field and magnetosphere, not to mention the examination of its atmospheric dynamics, seen in such roiling imagery as that depicted with stunning complexity in many of the JunoCam images.

Launched in 2011 and operational at Jupiter since 2016, Juno’s prime missions were to have ended in July of this year, with the spacecraft having completed 34 polar orbits, each of 53 day duration. The OPAG report refers to the subsequent extended mission as “a full Jovian system explorer with close flybys of satellites and rings.” The extended mission is to last through September, 2025, with observations of the planet’s ring system, its large moons, and a series of targeted observations and close flybys of Ganymede, Europa and Io.

That last clause really got my attention, as I hadn’t seen it coming. Juno is in an elliptical orbit with a 53-day period whose perijove migrates northward. This bit from the Senior Review reveals in depth the interactions between the various mission scenarios and satellite flybys. The three scenarios mentioned offer alternatives given varying science and budget considerations:

The proposed Juno extended mission (EM) would take advantage of the natural northward progression of the periapsis of the spacecraft’s orbit and the consequent lowering of spacecraft altitudes over Jupiter’s high northern latitudes. The EM would run until the end of the mission, with an expected duration of approximately four years. Under the High and Medium Scenarios, propulsive maneuvers would be utilized not only to target Jupiter-crossing longitude and perijove altitude, as during the prime mission, but also to target close flybys of Ganymede, Europa, and Io. The flyby maneuvers would act to shorten the spacecraft orbital period, yielding more close passes of Jupiter within a given time interval, and increase the rate of northward movement of spacecraft perijove. Under the Low scenario for EM operation, the satellite gravity assists and close satellite flybys would not be attempted.

So mission scientists have a number of options to work with. The extended mission investigates the northern hemisphere and probes the region above Jupiter’s polar cap aurora. The northern adjustment in Juno’s orbit is what makes the satellite flybys possible and enables as well close analysis of its ring structures. The Juno team can look forward to 3D mapping of Jupiter’s polar cyclones and studies of the planet’s unusual dilute core, the latter an earlier Juno discovery revealing a core consisting of both rocky material and ice as well as hydrogen and helium.

Both Europa Clipper and the European Space Agency’s JUICE mission (Jupiter Icy Moons Explorer) should benefit from Juno data on the radiation environment they will operate within. At Europa, Juno will continue the search for possible plume activity while examining the ice shell and mapping surface features, while studies of Io’s magma, polar volcanoes and interactions with Jupiter’s magnetosphere will be enabled by its encounters there. At Ganymede, magnetospheric interactions and surface composition data should be produced in abundance.

In the OPAG presentation, most of the Juno flybys will be at Io, with 11 possible between mid-2022 and 2025. Two encounters are planned for Ganymede (and recall that JUICE is scheduled to orbit the huge moon), and three encounters are feasible for Europa. The actual number of flybys will, according to the Senior Review, depend upon budget choices. In that document, I find this overview of Juno’s satellite flybys:

The orbit of Juno in the EM [extended mission] would take the spacecraft through the Io and Europa plasma tori and in close proximity to Io, Europa and Ganymede. Maps of Ganymede’s surface composition would allow studies to understand the importance of radiolytic processes in surface weathering, identify changes since Voyager and Galileo, and search for new craters. Juno’s Microwave Radiometer (MWR) is particularly sensitive to the upper 10 km of Europa’s ice shell. Studies at wavelengths complementing expected results from Europa Clipper’s radar would identify regions of thick and thin ice and search for regions where shallow subsurface liquid may exist. Juno’s visible and low-light cameras would search Europa for active plumes and changes in color/albedo that may reveal eruption regions since Galileo. The fields and particles experiments would look for evidence of recent activity. Finally, the Juno EM would include a flyby of Io and search for evidence of a magma ocean.

What an interesting development Juno’s extended mission turns out to be! Continuing science operations with existing equipment far undercuts the cost of new missions while extending long-duration datasets and, in the case of Juno, enabling a set of exciting new targets. We have the option here of a series of Galilean moon flybys that were never in Juno’s original mission, observations that could inform later choices made for Europa Clipper and JUICE. All told, Juno’s unanticipated extended mission is a heartening contribution to outer system science.