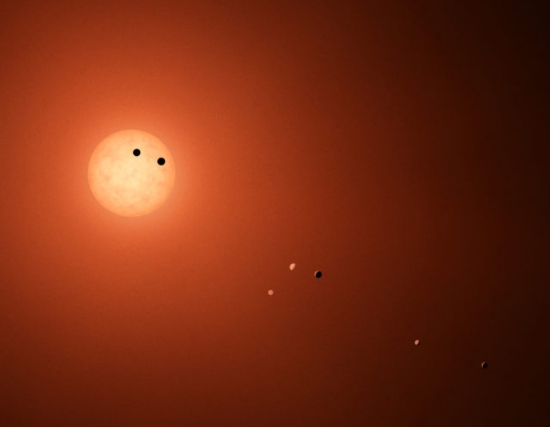 As if we needed another indication that the TRAPPIST-1 system is utterly different from our own, consider new work led by Eric Agol (University of Washington), which examines this seven-planet system in terms of the planets’ density. The planets here are all similar in size to Earth. Compare that with the huge range in planetary size we see in our own system. The new work tightens orbital dynamics and calculates their densities, showing they are all about 8 percent less dense than the rocky planets around Sol.

In the paper, the TRAPPIST-1 densities are calculated through analysis of abundant data (over 1,000 hours of observation by Spitzer alone, along with significant contributions from Kepler and ground-based telescopes like TRAPPIST and SPECULOOS). They are refined through computer simulations on planetary orbits, showing a system where planetary composition begs for an explanation.

We’re dealing with a system under intense scrutiny, one about which we have ever-tightening parameters on planetary diameter, mass and density, so we have much to work with. The work pauses briefly to consider a possible eighth planet:

Our mass precisions are predicated on a complete model of the dynamics of the system. We ignore tides and general relativity, which are too small in amplitude to affect our results at the current survey duration and timing precision (Bolmont et al. 2020). Should an eighth planet be lurking at longer orbital periods, which has yet to reveal itself via significant TTVs or transits, this may modify our timing solution and shift the masses slightly. In our timing search for an additional planet, however, we found that such a planet might only cause shifts at the ≈1σ level.

Agol worked with colleagues Zachary Langford and Victoria Meadows at the University of Washington, and an international team including scientists based in Switzerland, France, the UK and Morocco. Says Agol:

“This is one of the most precise characterizations of a set of rocky exoplanets, which gave us high-confidence measurements of their diameters, densities and masses. This is the information we needed to make hypotheses about their composition and understand how these planets differ from the rocky planets in our solar system.” 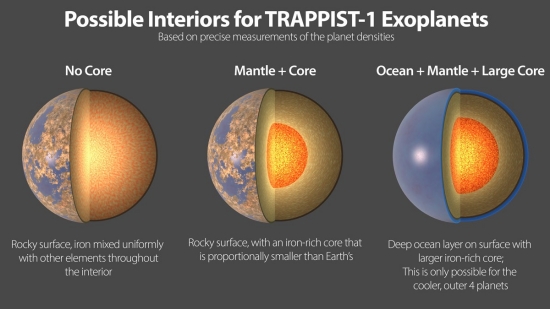 Image: Shown here are three possible interiors of the TRAPPIST-1 exoplanets. The more precisely scientists know the density of a planet, the more they can narrow down the range of possible interiors for that planet. All seven planets have very similar densities, so they likely have a similar compositions. Credit: NASA/JPL-Caltech.

The researchers examine the TRAPPIST-1 planets in terms of the proportion of iron, oxygen, magnesium and silicon thought to make up rocky worlds in any system. The 8 percent difference in density is explicable through several competing hypotheses.

A lower percentage of iron — 21 percent as compared to Earth’s 32 percent — would do the trick, possibly indicating a core with a lower relative mass (most of Earth’s iron is found in its core). Alternatively, planets enriched with oxygen compared to the Earth could produce iron oxide — rust — in abundance, possibly extending to the core (Earth, Mars, Mercury and Venus have cores of unoxidized iron). A combination of both these scenarios is possible, according to Agol, with the TRAPPIST-1 planets having less iron than our system’s rocky worlds but with a larger amount of it being oxidized.

A third possibility is that these planets are enriched with water compared to the Earth. Surfaces covered with water would change a planet’s overall density. This would demand amounts of water totalling 5 percent of the total mass of the four outer planets (by comparison, water makes up less than 0.1 percent of the Earth’s total mass). This would also imply hot, dense atmospheres for the three inner worlds at TRAPPIST-1.

Each hypothesis has consequences in terms of planet formation. Water worlds imply origins beyond the snow line, an environment rich in ice, with the planets subsequently migrating inward toward the host star. Long-term planetary configurations can form from migration, and the stability of TRAPPIST-1’s system has been examined in earlier work. Tightening up the constraints on planetary mass and orbital eccentricity allows the authors to again consider the question. They find that the idea of migration also fits the hypothesis of a fully oxidized planetary core. From the paper:

…the lower measured bulk densities of the TRAPPIST-1 planets relative to Earth-like composition might be explained by core-free interiors (Elkins-Tanton & Seager 2008) in which the oxygen content is high enough such that all iron is oxidized. If the refractory elements (Mg, Fe, Si) follow solar abundances, a fully oxidized interior would contain about 38.2 wt% of oxygen, which lies between the value for Earth (29.7 wt%) and CI chondrites (45.9 wt%). Such an interior scenario can easily describe the observed bulk densities…, and this may bolster the long-range migration scenario in which the planets formed in a highly oxidizing environment that enabled the iron to remain in the mantle even after migration.

One thing that would drive this work further is more information about the composition of the M8 red dwarf that hosts the planetary system. The authors point out that measurements of the Mg/Fe and Fe/Si ratios would affect the interpretation of their results on planetary cores and mantle composition.

And as we see so often in such work, a functioning James Webb Space Telescope is pointed to as a possibility for producing even more precise constraints on system dynamics and planetary bulk densities, which would aid in choosing among the competing hypotheses for composition. For all of this, the TRAPPIST-1 system is an ideal testing ground, as co-author Caroline Dorn (University of Zurich) notes:

“The night sky is full of planets, and it is only within the last 30 years that we have been able to begin to unravel their mysteries. The TRAPPIST-1 system is fascinating because around this unique star we can learn about the diversity of rocky planets within a single system. And we can also learn more about a planet by studying its neighbours, so this system is perfect for that.”

Previous post: Was the Wow! Signal Due to Power Beaming Leakage?