Yesterday’s story on the seven planets around TRAPPIST-1 dovetails nicely with the just announced find from scientists at CHEOPS. The ESA space telescope has determined that there are six planets around the star TOI-178. About 200 light years from Earth, this is a high proper-motion K-dwarf, the outer five of whose planets are locked into a 2:4:6:9:12 chain of Laplace resonances. The innermost world does not participate in the resonance. 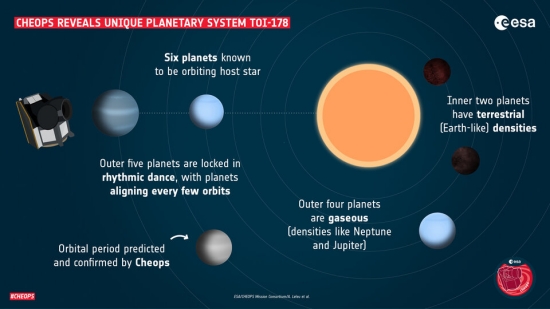 But more to the point of the TRAPPIST-1 comparison, whereas the seven planets there show similar densities, implying like compositions, the six worlds around TOI-178 show, in complete contrast to the orderly harmonics of their orbits, a wide range in density. The two inner planets have densities compatible with rocky worlds, while the outer four are gaseous. This is unusual for systems in this kind of complex resonance. No wonder ESA project scientist Kate Isaak is drawn up short:

“It is the first time we observe something like this. [In] the few systems we know with such a harmony, the density of planets steadily decreases as we move away from the star. In the TOI-178 system, a dense, terrestrial planet like Earth appears to be right next to a very fluffy planet with half the density of Neptune followed by one very similar to Neptune.”

Image: This artist’s impression shows the view from the planet in the TOI-178 system found orbiting furthest from the star. New research by Adrien Leleu and his colleagues with several telescopes, including ESO’s Very Large Telescope, has revealed that the system boasts six exoplanets and that all but the one closest to the star are locked in a rare rhythm as they move in their orbits. But while the orbital motion in this system is in harmony, the physical properties of the planets are more disorderly, with significant variations in density from planet to planet. This contrast challenges astronomers’ understanding of how planets form and evolve. This artist’s impression is based on the known physical parameters for the planets and the star seen. Credit: ESO/L. Calçada/spaceengine.org.

To produce the study, the CHEOPS measurements were enhanced by the addition of data from the TESS mission as well as the ESO spectrograph ESPRESSO, allowing scientists to measure the orbits and sizes of the planets: The orbital periods are 1.91, 3.24, 6.56, 9.96, 15.23, and 20.71 days respectively, while size ranges from 1.1 to 3 times Earth’s radius. It’s interesting to see that the 6th world around TOI-178 was found by extrapolating from the resonance pattern to look for a planet in a 15-day orbit to match the chain. After a short shutdown of CHEOPS observations, additional data were collected, confirming the existence of the 6th world. From the paper:

Careful analysis of the whole system additionally revealed that planets c, d, e, and g were in a Laplace resonance. In order to fit in the resonant chain, the unknown period of the additional planet could have only two values: P = 13.4527 d or P = 15.2318 d…, the latter value being more consistent with the RV data. A fourth CHEOPS visit was therefore scheduled for 3 October, and it detected the transit for the additional planet at a period of 15.231915 day[s]…

Lead author Adrien Leleu (University of Bern, University of Geneva and the National Center of Competence in Research PlanetS) puts the matter this way:

“This result surprised us, as previous observations with the Transiting Exoplanet Survey Satellite (TESS) of NASA pointed toward a three planets system, with two planets orbiting very close together. We therefore observed the system with additional instruments, such as the ground based ESPRESSO spectrograph at the European Southern Observatory (ESO)’s Paranal Observatory in Chile, but the results were inconclusive… After analyzing the data from eleven days of observing the system with CHEOPS, it seemed that there were more planets than we had initially thought.”

The animation below puts the system into motion.

Image: Artist’s animation of the TOI-178 orbits and resonances: This animation shows a representation of the orbits and movements of the planets in the TOI-178 system. The system boasts six exoplanets and all but the one closest to the star are in resonance. This means that there are patterns that repeat themselves rhythmically as the planets go around the star, with some planets aligning every few orbits. In this artist’s animation, the rhythmic movement of the planets around the central star is represented through a musical harmony, created by attributing a note (in the pentatonic scale) to each of the planets in the resonance chain. This note plays when a planet completes either one full orbit or one half orbit; when planets align at these points in their orbits, they ring in resonance. Credit: © ESO / L. Calçada.

Could there be other planets here? The paper points to other possible signals of transiting worlds in the data:

As there is no theoretical reason for the resonant chain to stop at 20.7 days, and the current limit probably comes from the duration of the available photometric and RV datasets, we give in Table 7 the periods that would continue the resonant chain for first-order (q = 1) and second-order (q = 2) MMRs [Mean Motion Resonance chains]… In the TOI-178 system, as well as in similar systems in Laplace resonance, planet pairs are virtually all nearly first-order MMRs. The most likely of the periods shown in Table 7 are therefore the first-order solutions with low k [a reference to the period ratio of the planets, with k being an integer], hence 45.00, 32.35, or 28.36 days; however, additional planets with such periods would not be transiting if they were in the same orbital plane as the others…

If you’re wondering (as I was), TOI-178’s habitable zone should have an inner boundary, according to the authors, at about 0.2 AU, producing a planet with a period of 40 days or so. In other words, other possible planets in the Laplace resonance chain could orbit inside or close to the habitable zone. Those we’ve found so far do not.

The use of resonance in predicting the existence of an exoplanet in such a complex system stands out. The authors call mean-motion resonance chains ‘Rosetta Stones’ of planetary system formation and evolution, and note that such configurations may emerge as protoplanetary disks evolve. But subsequent dissipation of the protoplanetary disk and tidal forces among closely spaced planets can produce instabilities that disrupt the resonance. The result is, as the authors note, that “resonant configurations are not the most common orbital arrangements.”

The paper is Leleu et al., “Six transiting planets and a chain of Laplace resonances in TOI-178,” accepted at Astronomy & Astrophysics (abstract / Preprint).