How Common Are Giant Planets around Red Dwarfs?

A planet like GJ 3512 b is hard to explain. Here we have a gas giant that seems to be the result of gravitational instabilities inside the ring of gas and dust that circles its star. This Jupiter-like world is unusual because of the ratio between planet and star. The Sun, for example, is about 1050 times more massive than Jupiter. But for GJ 3512 b, that ratio is 270, a reflection of the fact that this gas giant orbits a red dwarf with about 12 percent of the Sun’s mass. How does a red dwarf produce a debris disk that allows such a massive planet to grow? 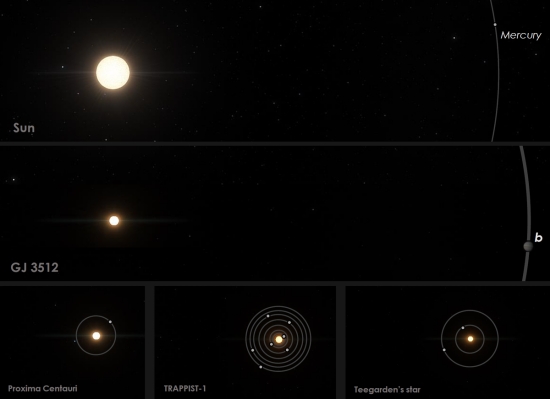 Image: Comparison of GJ 3512 to the Solar System and other nearby red-dwarf planetary systems. Planets around solar-mass stars can grow until they start accreting gas and become giant planets such as Jupiter, in a few millions of years. However, up to now astronomers suspected that, except for some rare exceptions, small stars such as Proxima, TRAPPIST-1, Teegarden’s star, and GJ 3512 were not able to form Jupiter mass planets. Credit: © Guillem Anglada-Escude – IEEC/Science Wave, using SpaceEngine.org (Creative Commons Attribution 4.0 International; CC BY 4.0).

I bring up GJ 3512 b (discovered in 2019) as an example of the kind of anomaly that highlights the gaps in our knowledge. While we often talk about red dwarf systems in these pages, the processes of planet formation around these stars remain murky. M-dwarfs may make up 80 percent of the stars in the Milky Way, but they host a scant 10 percent of the exoplanets we’ve found thus far. To tackle this gap, a team of scientists led by Nicolas Kurtovic (Max Planck Institute for Astronomy, Heidelberg) has released the results of its analysis of six very low mass stars n the Taurus star-forming region. These are stars with mass less than 20% that of the Sun.

The new work relies on data from the Atacama Large Millimeter/submillimeter Array (ALMA), taken at a wavelength of 0.87 millimeters in order to trace dust and gas in the disk around these stars at an angular resolution of 0.1 arcseconds. What’s intriguing here are the signs of ring-like structures in the dust that extend between 50 and 90 AU from the stars, which reminds us of similar, much larger disks around more massive stars. Half of the disks the Kurtovic team studied showed structures at these distances. The consensus is that such rings are markers for planets in the process of formation as they accumulate gas and dust. 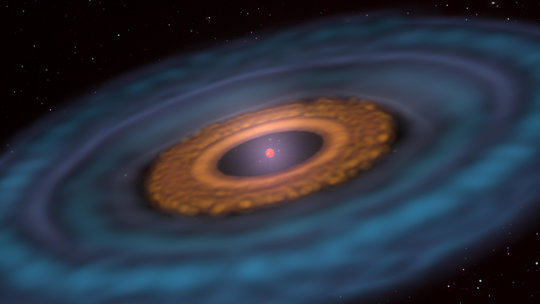 Image: Artistic representation of a planet-forming disk of dust and gas around a very low-mass star (VLMS). The inner dust disk contains a ring structure that indicates the formation of a new planet. The dust disk resides inside a larger gas disk whose thickness increases towards the edge. Credit: MPIA graphics department.

In the case of the M-dwarfs under study, the gaps in the rings being cleared by these planets would require worlds about as massive as Saturn, an indication that the material for gas giant formation is available. But time is a problem: Inward-movng dust evaporates close to the star, and in the case of red dwarfs, the migration is twice as fast as for more massive stars. There is little time in such a scenario for the planetary embryos needed for core accretion to form.

This is, I think, the key point in the paper, which notes the problem and explains current thinking:

The core accretion scenario for planet formation assumes collisional growth from sub-µm-sized dust particles from the interstellar medium (ISM) to kilometer-sized bodies or planetesimals… The collisions of particles and their dynamics within the disk are regulated by the interaction with the surrounding gas. Different physical processes lead to collisions of particles and their potential growth, such as Brownian motion, turbulence, dust settling, and radial drift…

Much depends upon the star in question. The paper continues (italics mine):

All of these processes have a direct or indirect dependency on the properties of the hosting star, such as the temperature and mass. For instance, from theoretical calculations, settling and radial drift are expected to be more efficient in disks around VLMS [Very Low Mass Stars] and BDs [Brown Dwarfs], with BD disks being 15-20% flatter and with radial drift velocities being twice as high or even more in these disks compared to T-Tauri disks.

The authors estimate that the ringed structures they’ve found around three of the red dwarfs under study formed approximately 200,000 years before the dust would have migrated to the central star. So planet formation must be swift: The planetary embryos need to accumulate enough mass to create gaps in the disk, which effectively block the dust from further inward migration. Without these gaps, the likelihood of planet formation drops.

Image: Observational data and model of the dust disk around the VLMS MHO6. Left: Image of the dust disk. Middle: The disk model with a 20 au wide central hole, which is consistent with a Saturn-mass planet located at a distance of 7 au from the star, accreting disk material. Right: Radial profile of the model (blue) and after convolving it with the telescope’s angular resolution (red). The black symbols represent the data obtained from the measured brightness distribution. The grey bar corresponds to the angular resolution of the observations. Credit: Kurtovic et al./MPIA.

Remember, we only have six stars to work with here, and the other three stars under investigation are likewise problematic. They appear to show dust concentrations between 20 and 40 AU from their stars, but in all three cases lack structure that can be defined by ALMA. Better resolution would, the authors believe, tease out rings inside even these smaller disks.

But the paper acknowledges that disks around stars that are still lower in mass demand that inward migration be reduced through ‘gas pressure bumps’ that can trap dust efficiently. Here’s the process (once again, the italics are mine):

The presence of pressure bumps produces substructures, such as rings, gaps, spiral arms, and lopsided asymmetries, with a different amplitude, contrasts, and locations depending on the origin of the pressure variations… Currently, due to sensitivity limitations, most of our observational knowledge about substructures comes from bright (and probably massive) disks, such as the DSHARP sample… A less biased sample of ALMA observations of disks in the star-formation region of Taurus has demonstrated that at least 33% of disks host substructures at a resolution of 0.1”, and the disks that do not have any substructures are compact (dust disk radii lower that ∼50 au…). It remains an open question if compact disks are small because they lack pressure bumps or because current observations lack the resolution to detect rings and gaps in these disks.

Such pressure bumps are a workable explanation but one without the kind of observational evidence we’ll need as we continue to investigate planet formation around low-mass stars and brown dwarfs. We are a long way from having a fully developed model for planet formation in this environment, and the Kurtovic et al. paper drives the point home. On a matter as fundamental as how common planets around red dwarfs are, we are still in the early stages of data gathering.