‘Xallarap’ is parallax spelled backward (at least it’s not another acronym). And while I doubt the word will catch on in common parlance, the effect it stands for is going to be useful indeed for astronomers using the Nancy Grace Roman Space Telescope. This is WFIRST — the Wide Field Infrared Survey Telescope — under its new name, a fact I mention because I think this is the first time we’ve talked about the mission since the name change in 2020. 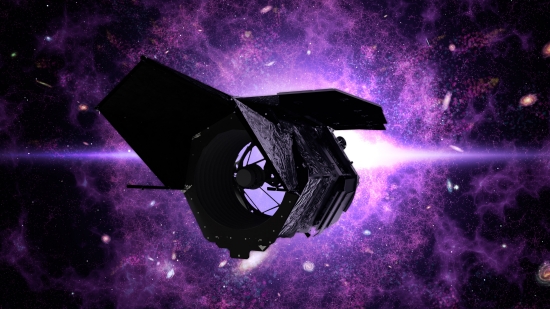 While a large part of its primary mission will be devoted to dark energy and the growth of structure in the cosmos, a significant part of the effort will be directed toward gravitational microlensing, which should uncover thousands of exoplanets. This is where the xallarap effect comes in. It’s a way of drawing new data out of a microlensed event, so that while we can continue to observe planets around a nearer star as it aligns with a background star, we will also be able to find large planets and brown dwarfs orbiting the more distant stars themselves.

Let’s back up slightly. The gravitational microlensing we’ve become familiar with relies on a star crossing in front of a more distant one, a chance alignment that causes light from the farther object to bend, a result of the curvature of spacetime deduced by Einstein. The closer star acts as a lens, making light from the background star appear magnified, and the analysis of that magnified light can also show the signature of a planet orbiting the lensing star. It’s a method sensitive to planets as small as Mars.

Moreover, gravitational microlensing makes it possible to see planets in a wide range of orbits. While the alignment events are one-off affairs — the stars from our vantage point are not going to be doing this again — we do have the benefit of being able to detect analogs of most of the planets in our own system. What Shota Miyazaki (Osaka University) and colleagues have demonstrated in a new paper is that ‘hot Jupiters’ and brown dwarfs will also be detectable around the more distant star. Xallarap is their coinage.

“It’s called the xallarap effect, which is parallax spelled backward. Parallax relies on motion of the observer – Earth moving around the Sun – to produce a change in the alignment between the distant source star, the closer lens star and the observer. Xallarap works the opposite way, modifying the alignment due to the motion of the source.”

Image: This animation demonstrates the xallarap effect. As a planet moves around its host star, it exerts a tiny gravitational tug that shifts the star’s position a bit. This can pull the distant star closer and farther from a perfect alignment. Since the nearer star acts as a natural lens, it’s like the distant star’s light will be pulled slightly in and out of focus by the orbiting planet. By picking out little shudders in the starlight, astronomers will be able to infer the presence of planets. Credit: NASA’s Goddard Space Flight Center.

The Roman telescope will be digging into the Milky Way’s central bulge in search of such objects as well as the thousands of exoplanets expected to be found through the older microlensing method, which Xallarap complements. And while microlensing works best at locating planets farther from their star than the orbit of Venus, xallarap appears to be better suited for massive worlds in tight orbits, which produce the biggest tug on the host star.

This will include the kind of ‘hot Jupiters’ we’ve found before but still have problems explaining in terms of their formation and possible migration, so finding them through the new method should add usefully to the dataset. In a similar way, the Roman instrument’s data on brown dwarfs found through xallarap should extend our knowledge of multiple star systems that include these objects, which are more massive than Jupiter but roughly the same radius.

Given that the view toward galactic center takes in stars that formed as much as 10 billion years ago, the Roman telescope will be extending the exoplanet search significantly. Until now, we’ve homed in on stars no more than a few thousand lights years out, the exception being those previously found through microlensing. The xallarap effect will complement the mission by helping us find older planets and brown dwarfs that fill in our knowledge of how such systems evolve. How long can a hot Jupiter maintain its tight orbit? How frequently will we find objects like these around ancient stars?

We should start getting useful data from both xallarap and more conventional microlensing some time in the mid-2020s, when the Roman instrument is due to launch. Nice work by Miyazaki and team.

Previous post: How Common Are Giant Planets around Red Dwarfs?