Although it seems so long ago as to have been in another century (which it actually almost was), the first detection of an exoplanet atmosphere came in the discovery of sodium during a transit of the hot Jupiter HD 209458b in 2002. To achieve it, researchers led by David Charbonneau used the method called transmission spectroscopy, in which they analyzed light from the star as it passed through the atmosphere of the planet. Since then, numerous other compounds have been found in planetary atmospheres, including water, methane and carbon dioxide.

Scientists also expect to find the absorption signatures of metallic compounds in hot Jupiters, and these have been detected in brown dwarfs as well as ultra-hot Jupiters. Now we have new work out of SRON Netherlands Institute for Space Research and the University of Groningen. Led by Marrick Braam, a team of astronomers has found evidence for chromium hydride (CrH) in the atmosphere of the planet WASP-31b, a hot Jupiter with a temperature of about 1200° C in the twilight region where light from the star passes through the atmosphere during a transit.

This is an interesting find because it has implications for weather. The temperature in this region is just where chromium hydride transitions from a liquid to a gas at the corresponding pressure in the atmosphere, making it a potential weather-maker just as water is for Earth. Braam speaks of the possibility of clouds and rain coming out of this, but hastens to add that while his team found chromium hydride with Hubble and Spitzer data, it found none in data from the Very Large Telescope (VLT). That would place the find in the realm of ‘evidence’ rather than proof.

Even so, it gives us something interesting to work with, assuming we do get the James Webb Space Telescope into space later this year. Co-author and SRON Exoplanets program leader Michiel Min notes the significance of the orbital lock hot Jupiters fall into:

“Hot Jupiters, including WASP-31b, always have the same side facing their host star. We therefore expect a day side with chromium hydride in gaseous form and a night side with liquid chromium hydride. According to theoretical models, the large temperature difference creates strong winds. We want to confirm that with observations.” 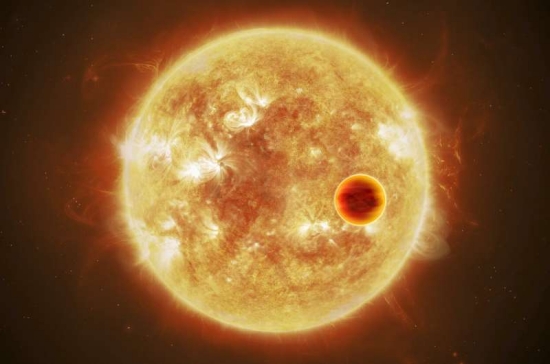 Image: A hot Jupiter crossing the face of its star as seen from Earth. Credit: ESA/ATG medialab, CC BY-SA 3.0 IGO.

WASP-31b orbits an F star at a distance of 0.047 AU and is one of the lowest density exoplanets yet found, with a mass of 0.478 that of Jupiter and a radius 1.549 times Jupiter’s. Potassium has already been found in its atmosphere as well as evidence for aerosols in the form of clouds and hazes, with some evidence for water vapor and ammonia. Braam and team analyzed previously available transmission data from Hubble and Spitzer using a software retrieval code called TauRex (Tau Retrieval for Exoplanets), reporting “the first statistical evidence for the signatures of CrH in an exoplanet atmosphere.” The paper goes on to note:

The evidence for CrH naturally follows from its presence in brown dwarfs and is expected to be limited to planets with temperatures between 1300 and 2000 K. Cr-bearing species may play a role in the formation of clouds in exoplanet atmospheres, and their detection is also an indication of the accretion of solids during the formation of a planet.