One thing is certain about the now confirmed object that is being described as the most distant ever observed in our Solar System. We’ll just be getting used to using the official designation of 2018 AG37 (bestowed by the Minor Planet Center according to IAU protocol) when it will be given an official name, just as 2003 VB12 was transformed into Sedna and 2003 UB313 became Eris. It’s got a charming nickname, though, the jesting title “Farfarout.”

I assume the latter comes straight from the discovery team, and it’s a natural because the previous most distant object, found in 2018, was dubbed “Farout” by the same team of astronomers. That team includes Scott Sheppard (Carnegie Institution for Science), Chad Trujillo (Northern Arizona University) and David Tholen (University of Hawaiʻi). Farout, by the way, has the IAU designation 2018 VG18, but has not to my knowledge received an official name. Trans-Neptunian objects can be useful for investigating the gravitational effects of possible larger objects — like the putative Planet 9 — deep in the reaches of the system. 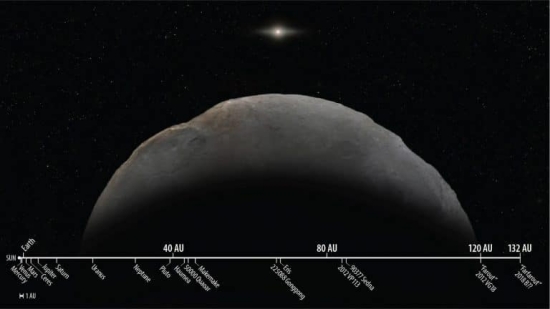 As to Farfarout, it turned up in data collected at the Subaru 8-meter telescope at Maunakea (Hawaiʻi) in 2018, with observations at Gemini North and the Magellan telescopes (Las Campanas Observatory, Chile) helping to constrain its orbit. Its average distance from the Sun appears to be 101 AU, but the orbit is elliptical, reaching 175 AU at aphelion and closing to 27 AU (inside the orbit of Neptune) at its closest approach to the Sun. That makes for a single revolution about the Sun that lasts a thousand years, and a long history of gravitational interactions with Neptune.

Farfarout is thought to be about 400 kilometers in diameter, making it a very small dwarf planet, though this would depend on interpretations of its albedo and the assumption that it is an icy object. In any case, its gravitational dealings with Neptune over the course of the Solar System’s history affect its usefulness as a marker for detecting massive objects further out. For that, we turn to objects like Sedna and 2012 VP113, which do not approach Neptune.

On the other hand, the Neptune interactions can be useful, as Chad Trujillo points out:

“Farfarout’s orbital dynamics can help us understand how Neptune formed and evolved, as Farfarout was likely thrown into the outer solar system by getting too close to Neptune in the distant past. Farfarout will likely strongly interact with Neptune again since their orbits continue to intersect.” 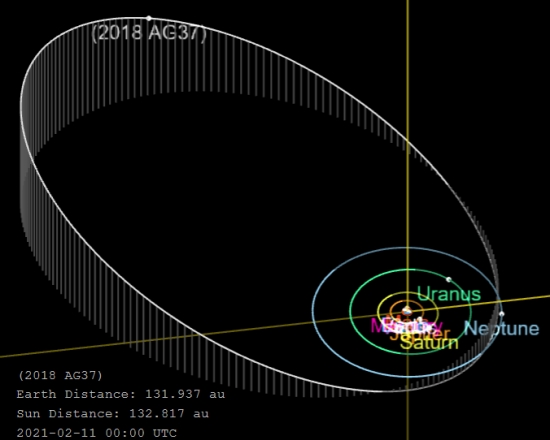 We’re at the early stages of our explorations of the outer system, and it’s safe to assume that a windfall of such objects awaits astronomers as our cameras and telescopes continue to improve. Sheppard, Tholen and Trujillo will doubtless turn up more as they continue the hunt for Planet 9.