The planets orbiting the young star TOI 451 should be useful for astronomers working on the evolution of atmospheres on young planets. This is a TESS find, three planets tracked through their transits and backed by observations from the now retired Spitzer Space Telescope, with follow-ups as well from Las Cumbres and the Perth Exoplanet Survey Telescope. TOI 451 (also known as CD-38 1467) is about 400 light years out in Eridanus, a star with 95% of the Sun’s mass, some 12% smaller and rotating every 5.1 days.

That rotation is interesting, as it’s more than five times faster than our Sun rotates, a marker for a young star, and indeed, astronomers have ways of verifying that the star is only about 120 million years old. Here the Pisces-Eridanus stream, only discovered in 2019, becomes a helpful factor. A stream of stars forms out of gravitational interactions between our galaxy and a star cluster or dwarf galaxy, shoe-horning stars out of their original orbit to form an elongated flow.

Named after the two constellations in which the bulk of its stars reside, the Pisces-Eridanus stream is actually some 1,300 light years in length and as seen from Earth extends across fourteen different constellations. And while Stefan Meingast (University of Vienna) and team, who discovered the stream, pegged its age as somewhat older, follow-up work by Jason Curtis at Columbia University (New York) determined that the stream was 120 million years old.

Stars of the same age with a common motion through space occur in several forms. A stellar association is a loose grouping of stars, with a common origin although now gravitationally unbound and moving together (I’m simplifying here, to be sure, because there are a number of sub-classifications of stellar associations). A moving group is still coherent, but now the stars are less obviously associated as the formation ages. The Ursa Major moving group is the closest one of these to Earth. A stellar stream like the Pisces-Eridanus stream has been stretched out by tidal forces, a remnant fragment of a dwarf galaxy now torn apart and gradually dispersing. 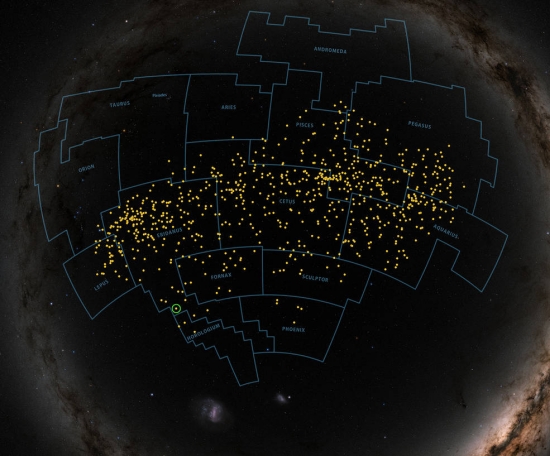 Image: The Pisces-Eridanus stream spans 1,300 light-years, sprawling across 14 constellations and one-third of the sky. Yellow dots show the locations of known or suspected members, with TOI 451 circled. TESS observations show that the stream is about 120 million years old, comparable to the famous Pleiades cluster in Taurus (upper left). Credit: NASA GSFC.

As with stellar moving groups we’ve looked at before, the Pisces-Eridanus stream seems to feature many stars that share common traits of age and metallicity. TESS comes into its own when studying a system like TOI 451 because its measurements of stars in the Pisces-Eridanus stream show strong evidence of starspots (rotating in and out of view and thus causing the kind of brightness variation TESS was made to measure). Starspots are prominent in younger stars, as is fast rotation. And all of that helps narrow down the possible age of the TOI 451 system.

The three planets around TESS 451 have a story of their own to tell. With temperatures ranging from 1200° C to 450° C, these are super-Earths, with orbits of 1.9 days, 9.2 days and 16 days. Despite the intense heat of the star, the researchers believe these worlds will have retained their atmospheres, making them laboratories for theories of how atmospheres evolve and what their properties should be. Already we know there is a strong infrared signature between 12 and 24 micrometers, which suggests the likely presence of a debris disk. The paper describes it this way, likening the age of stars in the Pisces-Eridanus stream to that found in the Pleiades:

The frequency of infrared excesses decreases with age, declining from tens of percent at ages less than a few hundred Myr to a few percent in the field (Meyer et al. 2008; Siegler et al. 2007; Carpenter et al. 2009). In the similarly-aged Pleiades cluster, Spitzer 24µm excesses are seen in 10% of FGK stars (Gorlova et al. 2006). This excess emission suggests the presence of a debris disk, in which planetesimals are continuously ground into dust…

And in this case we have a debris disk with a temperature near or somewhat less than 300 K. 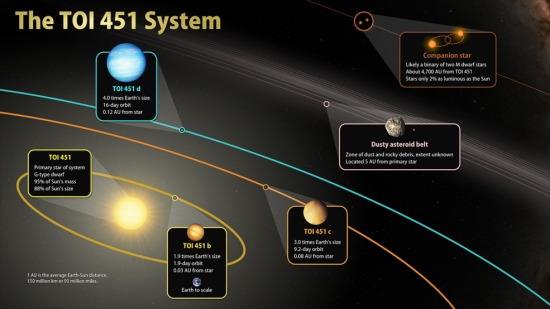 Image: This illustration sketches out the main features of TOI 451, a triple-planet system located 400 light-years away in the constellation Eridanus. Credit: NASA’s Goddard Space Flight Center.

A comparatively close system like this one should help us piece together the chemical composition of the planetary atmospheres as well as evidence of clouds and other features, with follow-up studies through instruments like the James Webb Space Telescope using transmission spectroscopy. Adding to the interest of TOI 451 is the fact that there may be a distant companion star, TOI 451 B, identified based on Gaia data on what appears to be a faint star about two pixels away from TOI 451. Or perhaps this is a triple system, as the paper suggests:

We note that Rebull et al. (2016), in their analysis of the Pleiades, detect periods for 92% of the members, and suggest the remaining non-detections are due to non-astrophysical effects. We have suggested TOI 451 B is a binary, which we might expect to manifest as two periodicities in the lightcurve. We only detect one period in our lightcurve; however, a second signal could have been impacted by systematics removal or be present at smaller amplitude than the 1.64 day signal, and so we do not interpret the lack of a second period further.

The difficulty of data collection here is apparent:

TOI 451 and its companion(s) are only separated by 37 arcseconds, or about two TESS pixels, so the images of these two stars overlap substantially on the detector. The light curve of the companion TOI 451 B is clearly contaminated by the 14x brighter primary star.

The non-standard methods used to extract the light curve of the companion star(s) are explained in the paper, and I’ll send you there if interested in the details. Note, too, the useful synergy of the TESS and Gaia datasets, which allowed the age of this system to be constrained and also resulted in the discovery of the three planets. As always, rapid growth in our datasets and cross correlations between them trigger the prospect of continuing discovery.

In connection with this work, I should also mention another finding from THYME, the TESS Hunt for Young and Maturing Exoplanets, out of which grew the TOI 451 work. HD 110082 b is a Neptune-class world of approximately 3.2 Earth radii, assumed to be about 11 times as massive as the Earth in a 250 million year old stellar system, another useful find when it comes to examining planet formation and evolution. The F-class primary is about 343 light years away.