I can remember when I first read about the experiment that Stanley Miller and Harold Urey performed at the University of Chicago in 1952 to see if organic molecules could be produced under conditions like those of the early Earth. It was a test of abiogenesis, though that wasn’t a word I knew at the time. Somewhere around 5th grade, I was a kid reading a book whose title has long escaped me, but the thought that scientists could re-create the atmosphere the way it was billions of years ago seized my imagination.

Never mind that exactly what was in that atmosphere has been controversial. What thrilled me was the attempt to reproduce something long gone — billions of years gone — and to experiment to find out what it might produce. I just finished Samanth Subramanian’s elegant biography of J. B. S. Haldane, the polymathic geneticist, mathematician, physiologist (and too much more to list here), whose work on the chemical formation of life was strongly supported by the Miller and Urey results, as was that of the Soviet biochemist Alexander Ivanovich Oparin, to whom Haldane always deferred when asked who should be given priority for the idea.

The biography, A Dominant Character (W. W. Norton, 2020) is a gem; I highly recommend it to those interested in these matters. And it was just the thing to be reading when I began to hear about the work of Fabian Schulz and Julien Maillard (IBM Research-Zurich).

Working with colleagues at the University of Paris-Saclay, the University of Rouen at Mont-Saint-Aignan, and the Fritz Haber Institute of the Max Planck Society, the researchers have been experimenting with atmospheres as well, though not of our own world but Titan, a moon frequently described as having analogues to the early Earth. In fact, they’ve re-created its atmosphere in an Earth laboratory, which may eventually tell us much about abiogenesis in both places through the use of atomic-scale microscopy.

Titan continues to fascinate. No other object in the Solar System offers up a nitrogen atmosphere of this density, along with organic processes and interactions between the atmosphere and the surface on a grand and highly visible scale. There is a distinct possibility that Earth’s atmosphere 2.8 billion years ago was close to what we see on Titan today. The timeframe is based on the creation of the first reef systems in the Mesoarchean Era, as cyanobacteria began their photosynthetic work to turn carbon dioxide into oxygen. So this is an obviously fecund arena for researchers to probe. 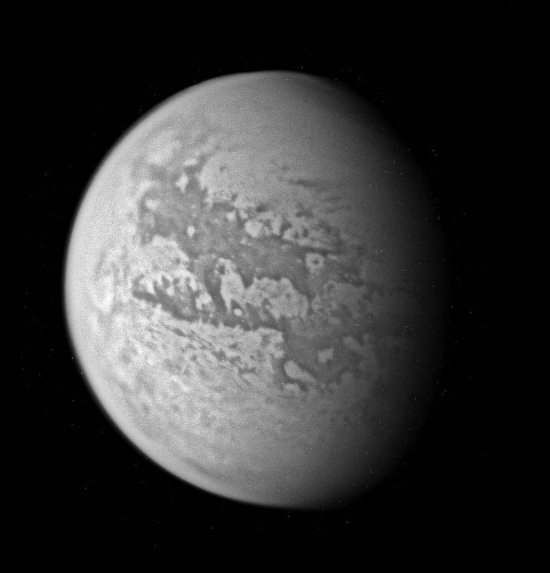 Image: Although the Huygens probe has now pierced the murky skies of Titan and landed on its surface, much of the moon remains for the Cassini spacecraft to explore. Titan continues to present exciting puzzles. This view of Titan uncovers new territory not previously seen at this resolution by Cassini’s cameras. The view is a composite of four nearly identical wide-angle camera images. Credit: NASA/JPL/Space Science Institute.

We’d like to know a lot more about that frustrating photochemical haze that hid the surface of Titan when Voyager 1 took its jog at Saturn to get a look at the moon. Here we’re seeing nanoparticles made out of organic molecules, with carbon, hydrogen and nitrogen in abundance. All this is the result of radiation from the Sun as it streams into the methane and nitrogen mix making up the bulk of Titan’s atmosphere. Previous lab experiments have focused on the organic molecules called tholins to understand the chemical nature of the molecules from which the haze is ultimately derived.

The term ‘tholin’ was first used in a 1979 Nature paper co-authored by Carl Sagan and Bishun Khare, who would doubtless be thrilled to see how large a role they play in our analysis of material in the outer system. Tholins got a lot of public exposure, for instance, when New Horizons flew past 486958 Arrokoth in the outer Solar System. They’re thought to have accounted for its reddish color, and are in fact common in this distant region as solar UV and cosmic rays interact with organic compounds on icy bodies.

The IBM experiment was structured to allow Schulz and Maillard to observe tholins in the formation process. Co-authors Leo Gross and Nathalie Carrasco explain:

“We flooded a stainless-steel vessel with a mixture of methane and nitrogen and then triggered chemical reactions through an electric discharge, thereby mimicking the conditions in Titan’s atmosphere. We then analyzed over 100 resulting molecules composing Titan’s tholins in our lab at Zurich, obtaining atomic resolution images of around a dozen of them with our home-built low-temperature atomic force microscope.” 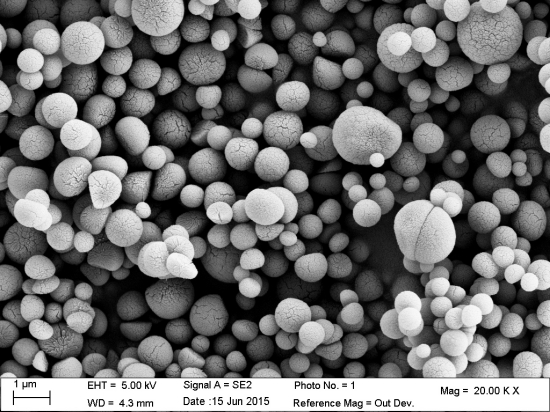 The work is significant because it is revealing how compounds like those found in Titan’s haze are built by using atomic-scale microscopy. This is a deep look into chemical bonding and structure that goes well beyond previous techniques, and offers what appears to be a new astrobiological tool. The scientists believe their work can be turned toward the analysis of Titan’s methane cycle, which like Earth’s hydrological cycle moves between a gaseous and liquid state, producing the moon’s lakes and seas.

The IBM work confirms that Titan’s orange haze is primarily made up of nitrogen-containing polycyclic aromatic hydrocarbons, with chemical structures that are related to the ‘wettability” of the haze, a factor that determines whether the haze nanoparticles float on the moon’s hydrocarbon lakes. From an IBM research blog:

Finding these new details on the chemical structure of tholins adds to our understanding not only of Titan’s haze but also of the likelihood that aerosols might have favored life on the early Earth in the past.

Did hazes like this at one time protect fragile DNA molecules from the Sun’s radiation? Gross and Carrasco point to the fact that the molecular structures the team has imaged are good absorbers of ultraviolet light. That would be useful information not just about the early Earth but also about the prospects for forms of life emerging on Titan itself. Future missions like Dragonfly should give us much information in this regard.

Meanwhile, I’m most interested in the implications of this work for astrobiology in general. Let me quote from the paper on these laboratory analogues of Titan’s haze:

These molecules are for example good UV absorbers and thus modulate the radiative balance of the atmosphere (Brassé et al. 2015). This chemical structure would also influence the surface energy of the haze particles, controlling their wettability with liquid/solid hydrocarbons and nitriles: it would impact their propensity to trigger methane rains in the troposphere and/or to transiently float at the lake surfaces of Titan (Cordier & Carrasco 2019; Yu et al. 2020).

And keep this in mind for the overall context:

More generally this work showed the potential of AFM technique to reveal the chemical structure of complex organic material of interest for astrochemistry, opening new perspectives in the chemical analysis of rare and complex material such as organic matter contained in meteorites or in the frame of future sample return missions.

Next post: P/2019 LD2: A Brief Interlude Among Jupiter’s Trojans