The orbital interactions between objects in a stellar system result in all kinds of interesting effects, a celestial pinball machine that sometimes flings planets outward to wander alone among the stars. Gas giants can be pulled from more distant orbits into a broiling proximity to their star. But the object known as P/2019 LD2 has a special interest because its interactions are happening in a tight time frame even as we observe them.

We could call P/2019 LD2 a ‘comet-like object,’ because it sometimes acts like an asteroid, sometimes like a comet. It is in fact a Centaur, one of that group of outer system objects that only become active as they move into the inner system. We’re watching a transition from Centaur to Jupiter family comet mediated by the gradually warming environment. This one evidently swung close to Jupiter roughly two years ago, to be flung by the giant planet’s gravity toward the Trojan asteroid group that leads Jupiter in its orbit by some 700 million kilometers.

At least that’s the thinking of lead author Bryce Bolin (Caltech), who used Hubble imagery as a follow-up to Spitzer data by way of identifying comet-like activity on P/2019 LD2. The Hubble work showed a cometary tail some 650,000 kilometers long, and could also resolve features near the nucleus at high resolution. The object’s coma and jets are clearly visible. Bolin believes that the gravitational interactions that put LD2 where it is today are comparatively rare:

“The visitor had to have come into the orbit of Jupiter at just the right trajectory to have this kind of configuration that gives it the appearance of sharing its orbit with the planet. We’re investigating how it was captured by Jupiter and landed among the Trojans. But we think it could be related to the fact that it had a somewhat close encounter with Jupiter.” 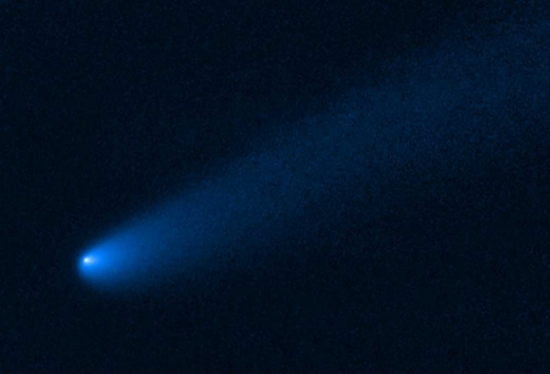 So this is a new interaction involving an object that was itself discovered only in June of 2019 by the University of Hawaii’s Asteroid Terrestrial-impact Last Alert System (ATLAS) telescopes and then identified in archival data from the Zwicky Transient Facility at Palomar Observatory. Moreover, this particular interaction is fleeting, because Bolin and team used computer simulations to show that another close encounter with Jupiter will occur in two years, one that should push the comet away from the Trojans and fling it into the inner Solar System.

Assuming LD2 has its origin in the Kuiper Belt, it would have been bumped out of its location there by other gravitational interactions with another KBO, warming as it moved closer to the Sun in a process thought to nudge a new short-period comet inward about once every century. LD2 also reminds us how we proceed with the identification of an object as a comet. This one began to show outgassing activity fully 750 million kilometers away from the Sun, which is interesting because at that distance water ice is only beginning to be able to sublimate.

That would imply that outgassing in the form of jets escaping from the nucleus is caused by carbon monoxide and carbon dioxide, which can be converted into gaseous form at lower temperatures. The team’s observations using Spitzer identified gas and dust around the nucleus and motivated the Hubble investigation at visible light wavelengths, as did contact from Japanese amateur astronomer Seiichi Yoshida, who had also seen activity on the object. 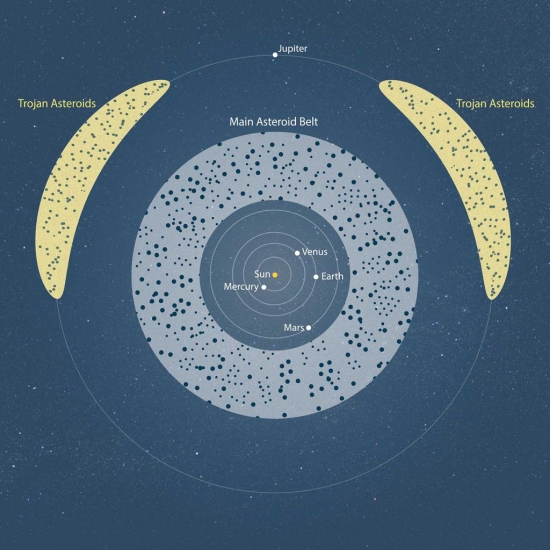 Where to from here? Exiting the Trojans and interacting again with Jupiter in two years, the object will likely head for deep space. But that could take some time. Carey Lisse of the Johns Hopkins University Applied Physics Laboratory (APL) describes the possibilities:

“Short-period comets like LD2 meet their fate by being thrown into the Sun and totally disintegrating, hitting a planet, or venturing too close to Jupiter once again and getting thrown out of the solar system, which is the usual fate. Simulations show that in about 500,000 years, there’s a 90% probability that this object will be ejected from the solar system and become an interstellar comet.”

But we should keep in mind what happens with comets as they move into warmer regions — they begin to change. Let me quote the paper on this:

Another consequence of the increased heating from closer proximity of the Sun is that large-scale ablation of the comet’s structure due to thermal stress can occur resulting in it becoming partially or completely disrupted (Fernandez 2009). Since P/2019 LD2 is now in transition between the Centaur and Jupiter Family Comet populations, it seems likely that it has become active for the first time, and as such, its activity will be rapidly evolving in response to the new epoch of increased Solar heating.

It will be fascinating to see that change as LD2 evolves, reminding us of the activity of icy objects nudged out of their distant Kuiper Belt orbits into the giant planet interactions that await them, a process that can take several million years as they move toward the inner system.

Next post: A Method for Creating Enormous Space Telescopes