A Useful Nearby Super-Earth

Gliese 486b is, in the words of astronomer Ben Montet, “the type of planet we’ll be studying for the next 20 years.” Montet (University of New South Wales) is excited about this hot super-Earth because it’s the closest such planet we’ve found to our own Solar System, at about 26 light years away. That has implications for studying its atmosphere, if it has one, and by extension sharpening our techniques for atmospheric analysis of other nearby worlds. The goal we’re moving toward is being able to examine smaller rocky planets for biosignatures.

But we’re not there yet, and what we have in Gliese 486b is an exoplanet that has now been identified as a prime target for future space- and ground-based instruments, one that, given its proximity, is an ideal next step to push our methods forward. The paper on this work shows that two techniques can be deployed here, the first being transmission spectroscopy, when this transiting world passes in front of its star and starlight filters through the atmosphere.

So-called emission spectroscopy happens when the planet orbits around to the other side of the star, making parts of the illuminated surface visible (think phases of the Moon as an analogy). Astronomers can deploy spectrographic tools in both methods to work out the chemical composition of the atmosphere, and according to Montet, Gliese 486b is the best single planet yet found for emission spectroscopy out of all the rocky planets we know. Moreover, says the astronomer, it’s the second best for transmission spectroscopy.

I asked Dr. Montet about this, wondering about the absolute best planet for transmission spectroscopy. His reply:

The best planet for transmission spectroscopy is TRAPPIST-1 b. Our new planet is #2, and the third best is L98-59 d, a planet discovered by TESS in 2019. We’re quantifying relative goodness using the Transmission Spectroscopy Metric from Eliza Kempton’s work in 2018.

Image: The graph illustrates the orbit of a transiting rocky exoplanet like Gliese 486b around its host star. During transit, the planet obscures the stellar disk. Simultaneously, a tiny portion of the starlight passes through the planet’s atmospheric layer. While Gliese 486b continues to orbit, parts of the illuminated hemisphere become visible like lunar phases until the planet vanishes behind the star. Credit: © MPIA graphics department.

430 degrees Celsius make Gliese 486b a nightmarish place, perhaps one with rivers of lava and, moreover, gravity that is 70 percent stronger than Earth’s. The planet orbits its star, an M-dwarf, every 36 hours. We can only imagine what an orbit this tight means for flares and coronal mass ejections on the surface, and it’s likely that the atmosphere itself could be threatened. What we find here in future studies will help us calibrate atmospheric survival and composition on planets orbiting red dwarfs.

The work on Gliese 486b comes out of the CARMENES Consortium, which is leading an effort that includes over 200 scientists and engineers from eleven institutions in Spain and Germany who have designed the 3.5 meter telescope at Calar Alto in southern Spain. The purpose is to monitor 350 M-dwarf stars in search of low-mass planets using a spectrograph mounted on the instrument. The word CARMENES is actually an acronym, and one that takes us into epic territory in terms of length: Calar Alto high-Resolution search for M dwarfs with Exoearths with Near-infrared and optical Échelle Spectrographs.

So far, what we know about Gliese 486b — using transit photometry and radial velocity spectroscopic data from a variety of Earth-based instruments as well as space-based TESS — is that it is about 2.8 times as massive as the Earth and about 30 percent larger. Calculating from mass and radius measurements, the astronomers on the team led by Trifon Trifonov (Max Planck Institute for Astronomy) find a mean density that indicates a rocky world with a metallic core, and as mentioned above, a gravitational pull about 70 percent stronger than Earth’s.

But is this planet’s tight orbital distance (2.5 million kilometers) too close for any atmosphere to survive? The paper makes it clear that this is possible but by no means certain:

With a radius of 1.31 RE, Gliese 486b is located well below the radius range of 1.4 to 1.8 RE, under which planets are expected to have lost their primordial hydrogen-helium atmospheres owing to photoevaporation processes. It remains unknown how stellar irradiation and planet surface gravity affect the formation and retention of secondary atmospheres.

Which makes this an interesting test case, because the numbers are provocative:

Planets with Teq > 880 K, such as 55 Cancri e, are expected to have molten (lava) surfaces and no atmospheres, except for vaporized rock. Gliese 486 b is not hot enough to be a lava world, but its temperature of ~700 K makes it suitable for emission spectroscopy and phase curve studies in search of an atmosphere. Our orbital model constrains the secondary eclipse time to within 13 min (at 1σ uncertainty), which is necessary for efficient scheduling of observations. Compared with other known nearby rocky planets around M dwarfs, Gliese 486 b has a shorter orbital period and correspondingly higher equilibrium temperature of ~700 K and orbits a brighter, cooler, and less active stellar host. 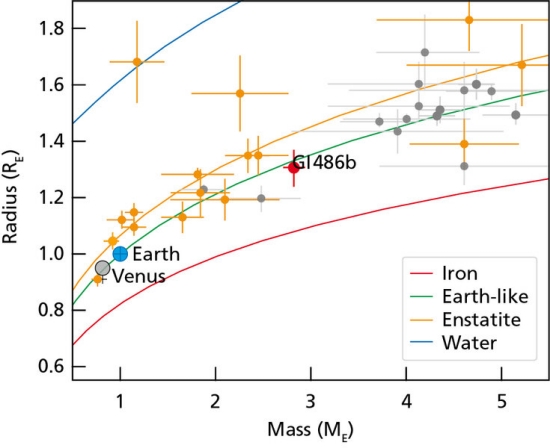 Image: The diagram provides an estimate of the interior compositions of selected exoplanets based on their masses and radii in Earth units. The red marker represents Gliese 486b, and orange symbols depict planets around cool stars like Gliese 486. Grey dots show planets hosted by hotter stars. The coloured curves indicate the theoretical mass-radius relationships for pure water at 700 Kelvin (blue), for the mineral enstatite (orange), for the Earth (green), and pure iron (red). For comparison, the diagram also highlights Venus and the Earth. Credit: Trifonov et al./MPIA graphics department.

We’re going to be learning a lot more about Gliese 486b as the effort to investigate it continues. How well rocky planets retain their atmospheres under extreme conditions will help us understand possible atmospheric processes going on in their stars’ presumably more clement habitable zones. Given their ubiquity, red dwarfs could be interesting places to look for life, but as this planet shows us, that investigation is in its early stages. For now, hot super-Earths are the best way to proceed.

Next post: FTL: Thoughts on a New Paper by Erik Lentz