Scientists at the European Southern Observatory are describing newly observed wind processes on Jupiter as “a unique meteorological beast.” I like the phrase and can see its application to the 1450 kilometer per hour jets they’ve uncovered near Jupiter’s poles. Just how they made this detection is fascinating in its own right, since they drew on a spectacular natural event, the 1994 collision of comet Shoemaker-Levy 9 with the planet, to deduce current conditions. The molecules that were produced in that impact are the lever that moves the investigation, which is headed by Thibault Cavalié (Laboratoire d’Astrophysique de Bordeaux). 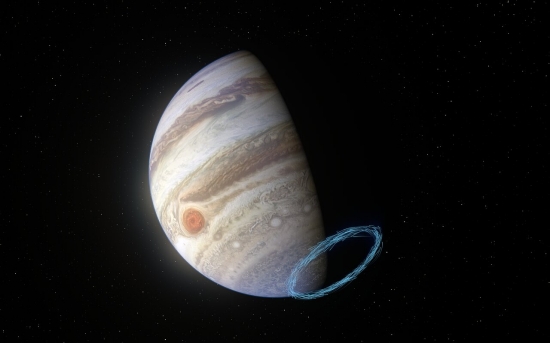 Image: This image shows an artist’s impression of winds in Jupiter’s stratosphere near the planet’s south pole, with the blue lines representing wind speeds. These lines are superimposed on a real image of Jupiter, taken by the JunoCam imager aboard NASA’s Juno spacecraft. Jupiter’s famous bands of clouds are located in the lower atmosphere, where winds have previously been measured. But tracking winds right above this atmospheric layer, in the stratosphere, is much harder since no clouds exist there. By analysing the aftermath of a comet collision from the 1990s and using the ALMA telescope, in which ESO is a partner, researchers have been able to reveal incredibly powerful stratospheric winds, with speeds of up to 1450 kilometres an hour, near Jupiter’s poles. Credit: ESO/L. Calçada & NASA/JPL-Caltech/SwRI/MSSS.

Thus we use an astronomical event to reveal information about another, otherwise unrelated system. And a good thing the Atacama Large Millimeter/submillimeter Array (ALMA) made this possible, because directly measuring winds in Jupiter’s stratosphere has been impossible up to now. The stratosphere is cloud free, eliminating cloud-tracking as an option.

But the Shoemaker-Levy 9 impacts produced hydrogen cyanide (HCN) that the scientists have tracked as it moves with the system of stratospheric jets on Jupiter. Similar to Earth’s jet streams, these narrow bands of winds pack quite a punch. The highest wind speeds occur under the aurorae near Jupiter’s poles, more than twice the maximum winds found in the planet’s Great Red Spot. Co-author Bilal Benmahi, also of the Laboratoire d’Astrophysique de Bordeaux, notes that “these jets could behave like a giant vortex with a diameter of up to four times that of Earth, and some 900 kilometres in height.“ A unique meteorological beast indeed. 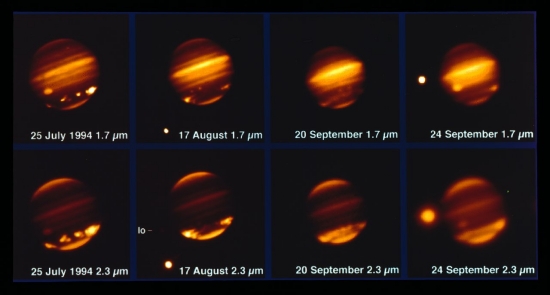 The strong winds near Jupiter’s poles were previously thought to exist hundreds of kilometers above the stratosphere, and their existence this deep in the atmosphere is the major surprise delivered by the paper, which has just been published in Astronomy & Astrophysics. The winds can be traced by measuring the Doppler shift in the ALMA data, which records the minute changes in the frequency of radiation emitted by the HCN molecules as they are carried in the flow. Strong stratospheric winds reaching 600 kilometers per hour likewise occur around Jupiter’s equator, but the polar winds clearly take the prize in a pattern of atmospheric circulation that turns out to be considerably more complex than we’ve ever realized. 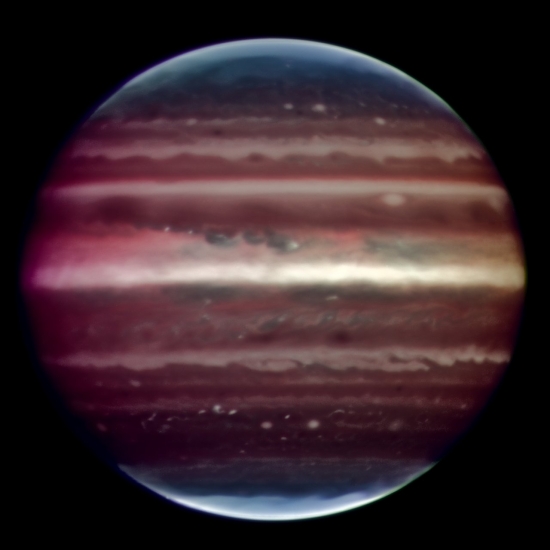 Image: Jupiter taken in infrared light on the night of 17 August 2008 with the Multi-Conjugate Adaptive Optics Demonstrator (MAD) prototype instrument mounted on ESO’s Very Large Telescope. This false colour photo is the combination of a series of images taken over a time span of about 20 minutes, through three different filters (2, 2.14, and 2.16 microns). The image sharpening obtained is about 90 milli-arcseconds across the whole planetary disc, a real record on similar images taken from the ground. This corresponds to seeing details about 300 km wide on the surface of the giant planet. The great red spot is not visible in this image as it was on the other side of the planet during the observations. The observations were done at infrared wavelengths where absorption due to hydrogen and methane is strong. This explains why the colours are different from how we usually see Jupiter in visible-light. This absorption means that light can be reflected back only from high-altitude hazes, and not from deeper clouds. These hazes lie in the very stable upper part of Jupiter’s troposphere, where pressures are between 0.15 and 0.3 bar. Mixing is weak within this stable region, so tiny haze particles can survive for days to years, depending on their size and fall speed. Additionally, near the planet’s poles, a higher stratospheric haze (light blue regions) is generated by interactions with particles trapped in Jupiter’s intense magnetic field. Credit: ESO/F. Marchis, M. Wong, E. Marchetti, P. Amico, S. Tordo.