The news that Ingenuity, the helicopter aboard NASA’s Perseverance rover, contains a swathe of fabric from the 1903 Wright Flyer underscores the conflation in time I’ve been feeling all week, ever since looking at the images below. The first, released by the New Horizons mission team, shows a speck to the right of Pluto. This is 486958 Arrokoth, the Kuiper Belt Object visited by New Horizons at the beginning of 2019 and superimposed in the Pluto image just for scale. 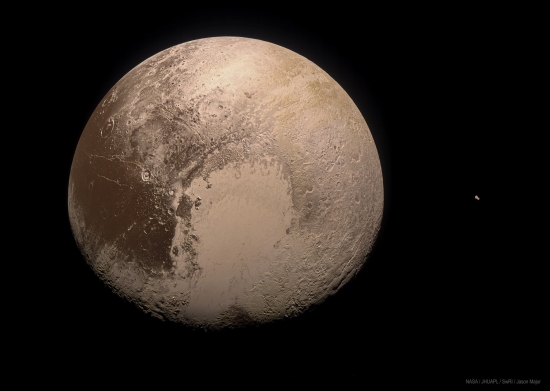 The point is strikingly made: Pluto itself, which had been no more than a speck in our field of view in 1930, when what was deemed the ninth planet was discovered, has now become a world, and even the tiny Arrokoth is a well imaged object, the farthest ever visited by a spacecraft. Such adjustments to scale are a marker for our success at pushing instruments into the outer Solar System, and they all but force philosophical musings. What would the bicycle makers from Ohio have made of something they touched that windy day on a North Carolina beach winding up on the fourth planet from the Sun? What would Clyde Tombaugh have thought about Sputnik Planitia and the abundant terrain we can now see on Pluto? 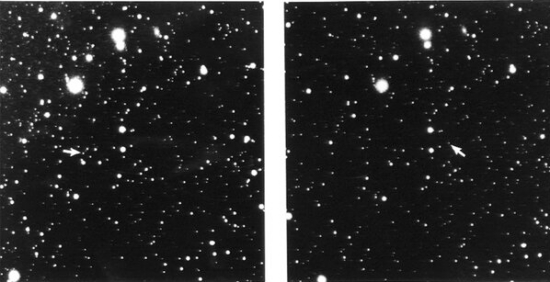 Image: A plates from the original discovery of Pluto in 1930. Credit: Lowell Observatory Archives.

New Horizons is very much alive, as principal investigator Alan Stern’s reports continue to remind us, the latest of which can be found here. We might see the imagery above as partially in celebration of an upcoming event, the crossing of the 50 AU distance from the Sun, which will occur on April 17 (or 18th, as time zones are accounted for). That’s another reminder that we’re in a region where the Sun, as Stern notes, is smaller in the sky than Jupiter from Earth. Only four other operating spacecraft ever made it out here, 7.5 billion kilometers from home.

Up next for New Horizons is the proposal of a new mission and science plan to NASA, one that would fund the craft for another three years. The proposal is due early next year, and will advocate the continued exploration of the outer Kuiper Belt, a place devoid of other spacecraft. Stern’s report is a bit philosophical itself, and why not. He notes that by the late 2030s, New Horizons will be too low on power (its plutonium power supply produces 3.3 watts less every year) to run the primary spacecraft systems, at which point it will be nearing 100 AU.

But even once the spacecraft is derelict—either because it runs out of power or fuel, or for any other reason—it will continue to coast outward, into the galaxy at a speed of nearly 3 AU (about 300 million miles) per year. In fact, even when the day comes in a few billion years that the Sun goes red giant and engulfs Earth, New Horizons, like the Pioneers and Voyagers, will still be out there, outliving even its home planet!

With those lines, Stern reaches into Olaf Stapledon territory. But there is potentially a lot to do before we lose this craft. The New Horizons team is working on a flight plan and command load to study three Kuiper Belt Objects in May, a reminder that to this point the spacecraft has studied almost 30 KBOs, close enough to some of them to work at resolutions beyond what the Hubble Space Telescope can provide. Continuing observations are planned for September and December.

Meanwhile, a summer search for a new KBO flyby target will take place. The hunt for Arrokoth took fully four years, but Stern says that this one may be a good deal quicker:

…we’re applying a new tool—artificial intelligence. Using machine-learning software, mission co-investigator JJ Kavelaars and collaborating scientist Wes Patrick have sped up and made those searches far more productive. In fact, when they reran the 2020 search data through their new software tools, it not only worked 100 times faster, but it turned up dozens of new KBOs that human searchers had not found in the search images! We’ll be taking advantage of this important new tool again later this year, and next year and after that as well.

With most of the new flight software upgrades scheduled for July uplink (the one for the SWAP solar wind instrument is already aboard), New Horizons will continue to produce new science. No one should ever take a mission extension for granted, especially in economic times like these, but it would be a spectacular failure of imagination should we turn away from a functioning spacecraft in a part of the Solar System where we have no other assets, and my instincts tell me we’ll be talking about another New Horizons KBO encounter down the road.

Here is a final image for today, one that never fails to stun me. We’re looking at Pluto’s surface just after the spacecraft’s closest approach. The scale jumps again from the Pluto image at the top of the post, in this case turning a world into a landscape. Note the terrain, the atmospheric haze, the detail that makes a remote object a setting for observation and awe. 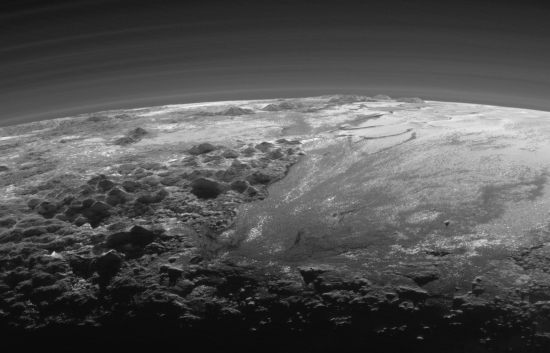