New thinking about the shape of the ice shell on Enceladus raises the interesting possibility that the ocean believed to lie beneath is churning with currents. That would be a departure from the accepted view that the ocean — thought to be 30 kilometers deep or more, as opposed to Earth’s average of 3.6 kilometers — is relatively homogenous.

Remember, this is a body of water buried beneath perhaps 20 kilometers of ice, locked within a moon that is 500 kilometers in diameter. We know it’s there because a 2014 flyby of the Cassini Saturn orbiter collected data on geyser activity erupting through the striking fissures in the south polar ice. That immediately put Enceladus high on the list of astrobiologically interesting targets along with, of course, Jupiter’s moon Europa. 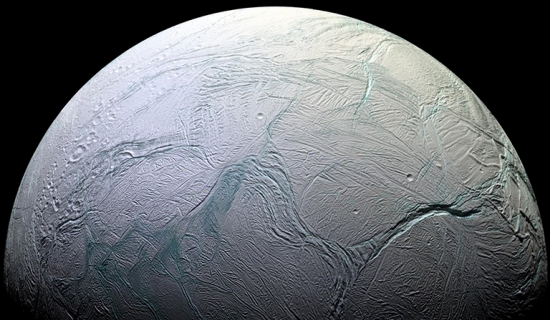 Image: A masterpiece of deep time and wrenching gravity, the tortured surface of Saturn’s moon Enceladus and its ongoing geologic activity tell the story of the ancient and present struggles of one tiny world. A new theory examines circulation within the ocean beneath the surface, with implications for future searches for life there. Credit: NASA/JPL-Caltech.

The differences from Earth’s oceans are obvious enough, including the fact that the Enceladus ocean is being heated from below at its interface with the core, while being cooled at the top, which argues for a great deal of vertical movement affecting its properties. The paper on this work points out that variations in the thickness of the ice shell would involve separate regions of freezing and melting at the upper ocean/ice interface.

To examine the resulting circulation, Caltech graduate student Ana Lobo, working with colleague Andrew Thompson and JPL’s Steven Vance and Saikiran Tharimena, has applied Thompson’s work on water/ice interactions in Antarctica to the Enceladus environment. The researchers used a computer model to demonstrate the likelihood of ocean currents beyond the expected vertical upwellings. This would be a process that transports heat and introduces a zone of freshwater in the moon’s polar regions, and is partially driven by salinity, a factor that Thompson has found to be affecting ocean circulation near Antarctica.

That’s something to consider as we ponder whether sampling directly from the Enceladus plumes actually reflects the broader conditions found within the global ocean. Cassini has already shown us that the Enceladus ice shell is thinner at the poles than at the equator, a likely indication of areas of melting and freezing that directly affect ocean currents. The reason: Freezing salty water releases salts and causes surrounding water to sink, with the opposite effect happening in regions where the ice is melting. “Knowing the distribution of ice allows us to place constraints on circulation patterns,” according to Lobo.

The researchers’ model implies that ocean circulation on Enceladus connects these areas of freezing and melting in a flow that goes from pole to equator. We will need to take such currents into account as we look into the potential for Enceladus to support life. From the paper:

The circulation will also impact how nutrients from the ocean-mantle boundary are distributed. If nutrients are transported upward primarily by ocean plumes, we would expect detrainment to release these nutrients in the ocean interior. In Earth’s ocean, it has been shown that adiabatic mixing, or stirring along isopycnals [lines connecting points of a specific density], can be an important pathway for nutrient delivery to the surface and modulate productivity there [26].

Thus, the distribution of freshwater fluxes at the ocean-ice interface, by setting global patterns of upwelling, could influence nutrient fluxes and provide insight into which regions of an icy world have resources for life to potentially flourish.

The study of oceans beneath the ice on outer system moons is in its infancy. The authors of the study, which appears in Nature Geoscience, close their paper by noting other ocean worlds where variability in the ice thickness may be large enough to alter the density structure of the ocean. Titan, with an ice shell anywhere from 50 to 100 kilometers thick, is a case in point, and the Dragonfly mission will carry a geophysical package that should yield further clues to the ocean beneath. At Jupiter, we have both Europa Clipper and JUICE to look forward to, helping to constrain variations in the thickness of the shell while probing the properties of the subsurface ocean.

Next post: Theia: Tracking Remnants of the ‘Big Whack’