The ‘Big Whack,’ as I’ve heard it called, is the impact of a planetary embryo of perhaps Mars-size (or larger) that is thought to have struck the Earth during the latter era of planet formation. Or we can call it the ‘Giant Impact,’ as Arizona State scientists did in a presentation at the virtual Lunar and Planetary Science Conference recently concluded. Whatever the name, the event offers a model for the formation of the Moon, one that explains the latter’s small iron core and the anomalous high degree of angular momentum of the Earth-Moon system. 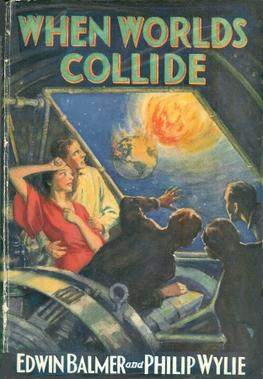 The impact of the protoplanet called Theia would have been a fearsome thing, blasting pieces of both worlds into space that later coalesced into the Moon. Think When Worlds Collide, the 1933 science fiction novel written by Philip Wylie and Edwin Balmer, whose cover is irresistible and thus must be reproduced here. Better known, of course, is the 1951 film of the same name, produced by George Pal. Neither has anything to do with the Moon but vast objects running into each other offer possibilities Hollywood was bound to seize at some point.

The new work on the Moon’s formation is less photogenic, but it draws on a detectable feature within the mantle of the Earth, so-called Large Low Shear Velocity Provinces (LLSVPs), which have been confirmed through seismic wave detections. The slowing of seismic waves that encounter LLSVPs is an indication that the material they’re made of is denser than the rest of the mantle, and indeed they seem to rest on the rim of the outer core, which is itself telling.

The work is complicated by the lack of agreement on the size of Theia and questions about its composition, as a description in the Lunar and Planetary Science Conference materials (LPI Contrib. No. 2548) makes clear:

…one of the most critical issues related to this scenario is that no evidence has been found for the existence of the hypothesized planetary embryo Theia. This is in part because of its widely debated size ranging from 0.1~0.45 Earth mass (M⊕) [5] and enstatite to carbonaceous chondrite composition [6]–[9]. Moreover, whereas it is mostly agreed that the core of Theia promptly merged with the proto-Earth core shortly after the impact [3], what fraction of and how the Theia mantle was preserved into the Earth mantle remain elusive. This post-impact process is not only responsible for the initial thermal and compositional structures of the Earth, but also significantly affects Earth’s long-term chemical evolution.

Image: The Giant Impact hypothesis for the origin of the LLSVPs. Credit: Li et al.

Did intact pieces of Theia’s mantle survive inside the Earth? The Arizona State study indicates that some of these materials account for the Large Low Shear Velocity Provinces, sinking to the bottom of Earth’s mantle in the process. The authors use numerical modeling experiments to support the idea, working with mantle materials from both Theia and the Earth as key components and producing models where the Theia materials sink and survive.

The key here is the density of the Theia mantle, allowing the material to survive mixing by convection within Earth’s mantle as long as it is denser than the material around it. The analysis suggests that the Theia materials were rich in iron and several percent denser, allowing them to sink to Earth’s lowest mantle and accumulate into the LLSVPs. The initial thickness of the Theia mantle materials in this model is in a range between 350 kilometers and 500 kilometers, existing as chunks of a protoplanet in the form of LLSVPs beneath Africa and the Pacific Ocean.