The circumstellar disks that give rise to planets occur in huge variety depending on the nature of star formation around them. Such disks form early as stars emerge, according to some recent work appearing within 10,000 years after the birth of the star. New work out of Leiden University in The Netherlands homes in on the environmental factors shaping the evolution of these disks, giving us a sense of how stellar systems differentiate as their planetary configurations form.

So a variety of astrophysical processes are at work simultaneously in these simulations, including not just stellar dynamics as the molecular cloud collapses but the effects of nearby young stars through processes like photoevaporation. In the latter, the disk surface evaporates due to radiation from the host star, or just as significantly, from bright stars nearby in the cluster. Areas of a disk can be cleared by host star radiation, while radiation from nearby stars can deplete in particular the outer regions of disks, where material is less bound to the host star.

No wonder we see the variety displayed in the image below. If nearby stars deplete a circumstellar disk too swiftly, planet formation becomes impossible. 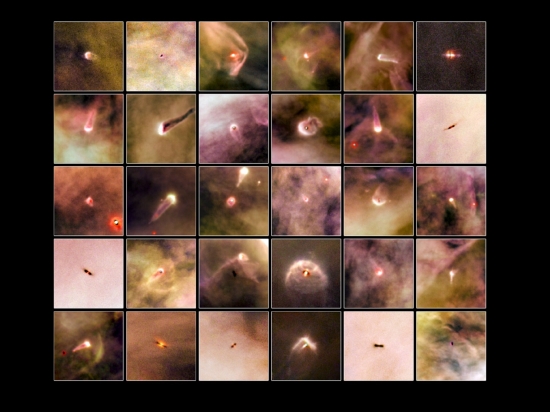 As you would imagine, this work gives us a wide variety of potential disk-modifying events. In young star clusters, close encounters from stellar flybys can affect the size and shape as well as surface density of the disks, sometimes forcing the appearance of spiral arms. Disks can exchange mass and tidal streams can emerge, all found in recent disk observations. The outer edge of a disk can become truncated by the passage of a nearby star. In fact, lead author Concha-Ramírez thinks this may have occurred in our own early Solar System:

“A collision may have taken place between our circumstellar disc and another disc. We can see proof of this at the edge of our Solar System, in the region of the planet Neptune. Here there are suddenly much fewer asteroids, which suggests that another disc could have nabbed material. And there is another interesting clue that there might have been a collision between discs: asteroids that, in relation to the Earth, orbit the sun on a different plane. These asteroids probably come from another disc.”

That’s a controversial ‘probably,’ but Concha-Ramírez is pointing to the so-called Sednitos that move in the outer regions of the Solar System between the Kuiper Belt and the Oort Cloud, whose origin is still up for grabs. Other observational evidence of disk-shaping by the environment can be found in the Orion Nebula, where we see ‘proplyds,’ circumstellar disks that are swathed in the radiation of tightly spaced stars. Here we can find cometary tail-like structures, and mass loss as disks closest to massive stars experience photoevaporation. 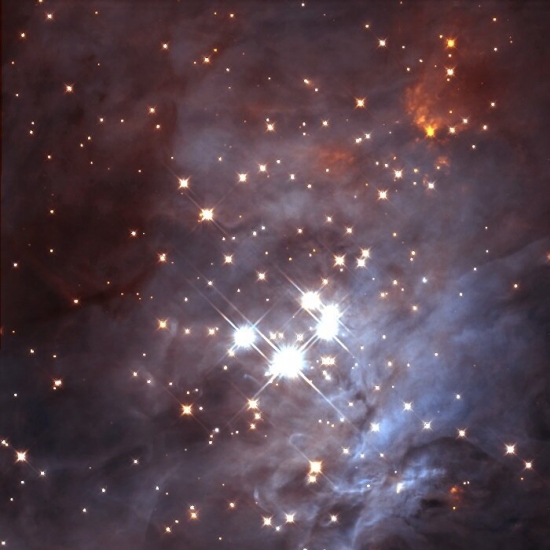 In general, disk masses decrease as the density of nearby stars increases, but the authors are quick to add that massive disks can still form in regions like these. About 60 percent of the disks are destroyed by photoevaporation within the first 100,000 years of evolution in high density star regions, but in these simulations, massive radiating stars do not all form at the same time, and tend to emerge later than low mass stars. This would give some massive disks more time to evolve. Gas present in the clusters also has a protective effect and helps to explain the proplyds found in Orion, which have found a path to persist despite intense external radiation.

The catalog of disks emerging out of all this seems to be as broad as the catalog of the planets that emerge within them. Making the call on which disks will survive and in what form is a matter of sorting all of these factors on a case by case basis. From the paper:

…while photoevaporation is an important process for the depletion of disc masses, other factors such as the morphology of the star-forming regions and the length of the star formation process can allow for circumstellar discs to survive for long periods of time, and to remain massive enough to form planets. This could help explain the great variety of disc mass distributions observed in star-forming regions of different ages and configurations, and could also be a factor in solving the ‘proplyd-lifetime problem’, where massive discs are observed in regions of high stellar density and background radiation.