Uranus: Detection of X-rays and their Implications

Just as Earth’s atmosphere scatters light from the Sun, both Jupiter and Saturn scatter X-rays produced by our star. In a new study using data from the Chandra X-ray Observatory, we now learn that Uranus likewise scatters X-rays, but with an interesting twist. For there is a hint — and only a hint — that scattering is only one of the processes at work here, and that could produce insights into a system that thus far we have been able to study up close only once, through the flyby of Voyager 2. As the paper on this work notes: “These fluxes exceed expectations from scattered solar emission alone.” Just what is going on here will demand further work.

William Dunn (University College London) is lead author of the paper, which includes co-authors from an international team working with Chandra data from 2002 and 2017. In the image below, the X-ray data from Chandra is superimposed upon a 2004 observation of Uranus from the Keck telescope, which shows the planet at essentially the same orientation as the 2002 Chandra observations. Any image of Uranus reminds us that the ice giant, about four times Earth’s diameter, rotates on its side, with twin sets of rings around the equator. 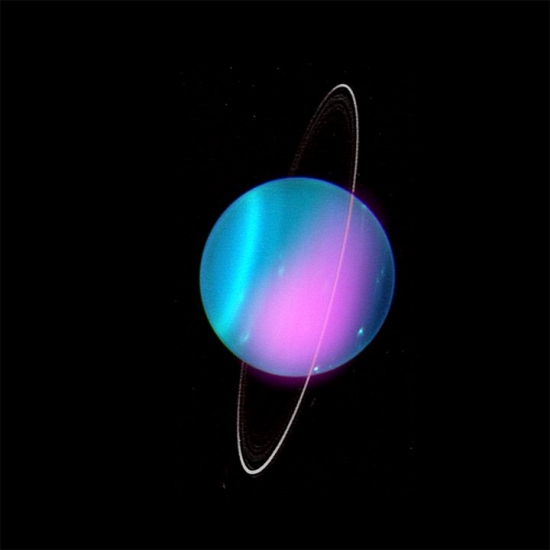 Image: The first X-rays from Uranus have been captured by Chandra during observations obtained in 2002 and 2017, a discovery that may help scientists learn more about this ice giant planet. Researchers think most of the X-rays come from solar X-rays that scatter off the Uranus’s atmosphere as well as its ring system. Some of the X-rays may also be from auroras on Uranus, a phenomenon that has previously been observed at other wavelengths. This Uranus image is a composite of optical light from the Keck telescope in Hawaii (blue and white) and X-ray data from Chandra (pink). Credit: X-ray: NASA/CXO/University College London/W. Dunn et al; Optical: W.M. Keck Observatory.

Uranus’ orientation is significant given that its rotation axis is almost parallel to the plane of its orbit. Moreover, the tilt of the rotation axis differs from that of the planet’s magnetic field and is also offset from the planet’s center. That should play into the auroral activity observed on Uranus, a useful trait because exactly how the auroral process works has not been determined. On Earth, auroras are the result of electrons traveling along the planet’s magnetic field lines to the poles, and we likewise find auroral activity on Jupiter, where a similar effect is in play. But the Jovian auroras are also fired by positively charged atoms entering the polar regions.

Are the auroras of Uranus one source of the recently detected X-rays? The possibility remains in the mix pending further study. Given that X-rays are emitted on Earth and Jupiter as a result of auroral activity, the unusual axial and magnetic field tilt on Uranus may clarify our understanding of the process, while illuminating how other astrophysical objects emit X-rays.

Without further data, the authors can only speculate, but they see another possible cause in the rings of Uranus. The rings of Saturn are known to produce X-rays, and it is possible that the interactions of the Uranian rings with charged particles could cause an X-ray glow that is detectable.

As we learn more, it’s clear that Uranus is an interesting laboratory for X-ray work, with a highly variable magnetosphere interacting in complicated ways with the solar wind. That hint of processes beyond X-ray scattering, however, may point to an actual mechanism for their production or, as the authors note, may be no more than a statistical fluctuation in the Chandra data. How we develop this picture depends upon further Chandra work and possibly data from XMM-Newton, the European Space Agency’s X-ray observatory. The roadmap for that investigation is explained in the paper:

…an observation lasting a few XMM‐Newton orbits would be needed to provide a Uranus X‐ray spectrum that could be modeled. This would enable a deeper characterization of the spectrum from Uranus, to explore, for example, the presence of fluorescence line emissions from the rings. Further, and longer, observations with Chandra would help to produce a map of X‐ray emission across Uranus and to identify, with better signal‐to‐noise, the source locations for the X‐rays, constraining possible contributions from the rings and aurora. Such longer timescale observations would also permit exploration of whether the emissions vary in phase with rotation, potentially suggestive of auroral emissions rotating in and out of view.

Next post: Roman Space Telescope: Planets in the Tens of Thousands