Roman Space Telescope: Planets in the Tens of Thousands

The Nancy Grace Roman Space Telescope is the instrument until recently known as WFIRST (Wide-Field Infrared Survey Telescope), a fact I’ll mention here for the last time just because there are so many articles about WFIRST in the archives. From now on, I’ll just refer to the Roman Space Telescope, or RST. Given our focus on exoplanet research, we should keep in mind that the project’s history has been heavily influenced by concepts for studying dark energy and the expansion history of the cosmos. The exoplanet component has grown, however, into a vital part of the mission, and now includes both gravitational microlensing and transit studies.

We’ve discussed both methods frequently in these pages, so I’ll just note that microlensing relies on the movement of a star and its accompanying planetary system in front of a background star, allowing the detection because of the resultant brightening of the background star’s light. We’re seeing the effects of the warping of spacetime caused by the nearer objects, with the brightening carrying the data on one or more planets around the central star. You can see why a target-rich environment is needed here — such occulations are random and lots of stars are needed to cull out a few. Thus RST looks toward galactic center.

Assuming a successful launch and operations beginning in the mid-2020s, the RST should be a prolific planet-hunter indeed. NASA is now projecting, based on a 2017 paper from Benjamin Montet (now at the University of New South Wales) and colleagues, that the anticipated light curves for millions of stars should turn up as many as 100,000 planets. Montet et al. actually cite as many as 150,000, noting that the WFIRST field is more metal rich than the main Kepler field. All of these systems should have measured parallaxes, though most will be too faint for follow-ups.

Even so, the Montet paper finds ways to confirm some of these:

We find that secondary eclipse depth measurements can be used to confirm as many as 2900 giant planets, which can be detected at distances of > 8 kpc. From these confirmed WFIRST planets, we will be able to measure the variation in the occurrence rate of short-period giant planets. Furthermore, we show that WFIRST is capable of detecting TTVs which can be used to confirm the planetary nature of some systems, especially those with smaller planets.

This is particularly fruitful — consider that the transiting planets that RST finds will in most cases not be found around the same host stars as the planets found through microlensing. The two methods enable separate probes of the same population of planets but at different separations, with transits being most detectable for close-in planets and microlensing being the method to detect planets much further out in the system. We go from star-hugging hot Jupiters to planets beyond 10 AU. Microlensing should also turn up free-floating ‘rogue’ planets.

The Kepler mission studied stars in an area encompassing parts of Lyra, Cygnus and Draco, most of them ranging from 600 to 3,000 light years away. With RST, we will be going from Kepler’s 115 square degree field of view of relatively nearby stars to a 3 square degree field that, because it is toward galactic center, will track up to 200 million stars. The average distance of stars in this field will be in the range of 10,000 light years in what will be the first space-based microlensing survey, looking at planets all a wide range of distance from the host star. 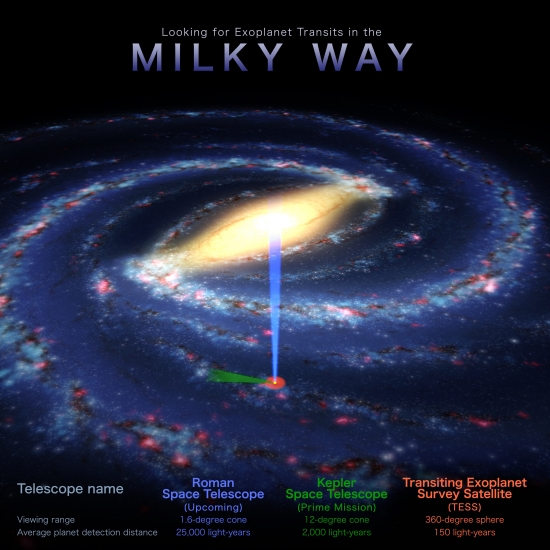 Image: This graphic highlights the search areas of three planet-hunting missions: the upcoming Nancy Grace Roman Space Telescope, the Transiting Exoplanet Survey Satellite (TESS), and the retired Kepler Space Telescope. Astronomers expect Roman to discover roughly 100,000 transiting planets, worlds that periodically dim the light of their stars as they cross in front of them. While other missions, including Kepler’s extended K2 survey (not pictured in this graphic), have unveiled relatively nearby planets, Roman will reveal a wealth of worlds much farther from home. Credit: NASA’s Goddard Space Flight Center.

The synergy between microlensing and transit work is clear. Jennifer Yee, an astrophysicist at the Center for Astrophysics | Harvard & Smithsonian, notes that thousands of transiting planets are going to turn up within the microlensing data. “It’s free science,” says Yee. Benjamin Montet agrees:

“Microlensing events are rare and occur quickly, so you need to look at a lot of stars repeatedly and precisely measure brightness changes to detect them. Those are exactly the same things you need to do to find transiting planets, so by creating a robust microlensing survey, Roman will produce a nice transit survey as well.”

So we’ve gone from the relatively close — Kepler with stars at an average distance of 2,000 light years — to the much closer — TESS, with its scans of the entire sky focusing in particular on stars in the range of 150 light years — and now to RST, which backs out all the way to galactic center, a field encompassing stars as far as 26,000 light years away. NASA estimates that three-quarters of the transits RST detects will be gas or ice giants, with most of the rest being planets between four and eight times as massive as Earth, the intriguing ‘mini-Neptunes.’ For its part, microlensing takes us down to rocky planets smaller than Mars and up to gas giant size.

The Montet paper is “Measuring the Galactic Distribution of Transiting Planets with WFIRST,” Publications of the Astronomical Society of the Pacific Vol. 129, No. 974 (24 February 2017). Abstract.

Previous post: Uranus: Detection of X-rays and their Implications