It’s easy to forget how large our space probes have been. A replica of the Galileo probe during at the Jet Propulsion Laboratory can startle at first glance. The spacecraft was 5.3 meters high (17 feet), but an extended magnetometer boom telescoped out to 11 meters (36 feet). Not exactly the starship Enterprise, of course, but striking when you’re standing there looking up at the probe and pondering what it took to deliver this entire package to Jupiter orbit in the 1990s. 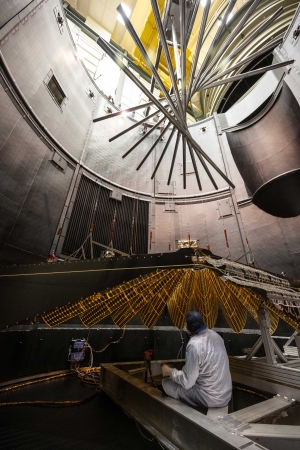 The same feeling settles in this morning with news out of Lockheed Martin Space, where in both December 2020 and February of 2021 final deployment tests were conducted on the solar arrays that will fly aboard the Lucy mission. Scheduled for launch this fall (the launch window opens on October 16), Lucy is to make a 12-year reconnaissance of the Trojan asteroids of Jupiter. Given that energy from the Sun is inversely proportional to the square of the distance, Lucy in Jupiter space will receive only 1/27th of the energy available at Earth orbit

“The success of Lucy’s final solar array deployment test marked the end of a long road of development. With dedication and excellent attention to detail, the team overcame every obstacle to ready these solar panels.”

Those are the words of Matt Cox, Lockheed Martin’s Lucy program manager, in Littleton, Colorado, who added:

“Lucy will travel farther from the Sun than any previous solar-powered Discovery-class mission, and one reason we can do that is the technology in these solar arrays.”

Lucy will actually move beyond Jupiter’s orbit in its study of the Trojans, up to 853 million kilometers out, so we need big panels. With the panels attached and fully extended, they could cover a five-story building. They’ll need to supply about 500 watts to the spacecraft and its instruments. Manufactured by Northrop Grumman, each solar panel when folded is no more than 4 centimeters thick, but when expanded, will have a diameter of almost 7.3 meters.

[But see Alex Tolley’s comment below. I believe the solar panel thickness is actually 10 cm]

The good news is that with the help of weight offloading devices for needed support under gravity, the deployment tests, conducted in a thermal vacuum chamber at Lockheed Martin Space in Denver, went flawlessly. Hal Levison (Southwest Research Institute) points to the critical nature of the process:

“At about one hour after the spacecraft launches, the solar panels will need to deploy flawlessly in order to assure that we have enough energy to power the spacecraft throughout the mission. These 20 minutes will determine if the rest of the 12 year mission will be a success. Mars landers have their seven minutes of terror, we have this.”

Which takes me back momentarily to Galileo, where the ‘seven minutes of terror’ involved about 165 seconds, the time it was believed it would take the spacecraft’s actuators to deploy its high-gain antenna. The failure to deploy properly ultimately forced controllers to use a low-gain antenna to return data, a workaround that produced great science but at a much reduced rate. We know what happened here, which involved events during the 4.5 years Galileo spent in storage following the explosion of the Challenger shuttle, and we can hope that the thorough deployment tests at Lockheed Martin Space will ensure a successful deployment for Lucy. 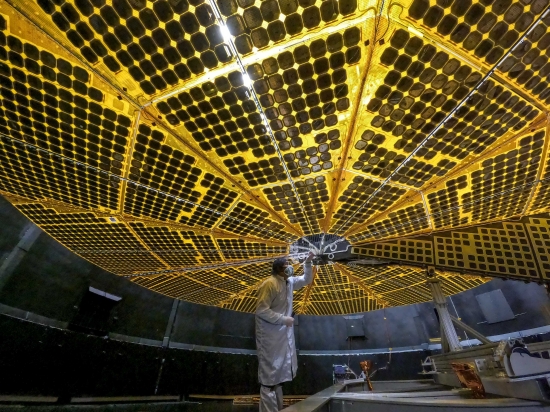 Image: At 24 feet (7.3 meters) across each, Lucy’s two solar panels underwent initial deployment tests in January 2021. In this photo, a technician at Lockheed Martin Space in Denver, Colorado, inspects one of Lucy’s arrays during its first deployment. These massive solar arrays will power the Lucy spacecraft throughout its entire 4-billion-mile, 12-year journey as it heads out to explore Jupiter’s elusive Trojan asteroids. Credit: Lockheed Martin.