How Planetesimals Are Born

What governs the size of a newly forming star as it emerges from the molecular cloud around it? The answer depends upon the ability of gravity to overcome internal pressure within the cloud, and that in turn depends upon exceeding what is known as the Jeans Mass, whose value will vary with the density of the gas and its temperature. Exceed the Jeans mass and runaway contraction begins, forming a star whose own processes of fusion will arrest the contraction.

At the Max Planck Institute for Astronomy (Heidelberg), Hubert Klahr and colleagues have been working on a different kind of contraction, the processes within the protoplanetary disk around such young stars. Along with postdoc Andreas Schreiber, Klahr has come up with a type of Jeans Mass that can be applied to the formation of planetesimals. While stars in formation must overcome the pressure of their gas cloud, planetesimals work against turbulence within the gas and dust of a disk — a critical mass is needed for the clump to overcome turbulent diffusion. The new paper on this work extends the findings reported in a 2020 paper by the same authors.

The problem this work is trying to solve has to do with the size distribution of asteroids; specifically, why do primordial asteroids — planetesimals that have survived intact since the formation of the Solar System, without the collisions that have fragmented so many such objects — tend to be found with a diameter in the range of 100 kilometers? To answer the question, the researchers look at the behavior of pebbles in the disk, small clumps in the range of a few millimeters to a few centimeters in size. Here the plot thickens.

Pebbles tend to drift inward toward the star, meaning that if these pebbles accrete slowly, they would fall into the star before reaching the needed size. Klahr and Schreiber argue that this drift can be overcome thanks to turbulence within the gas of the protoplanetary disk, creating traps where the pebbles can accumulate enough mass for them to become bound together by gravity. Turbulence is a local effect, to be sure, but it can also vary as the disk changes with increased distance from the star. A fast enough drop in gas pressure with distance can create a streaming instability within the disk, so that pebbles move chaotically and churn the gas around them. 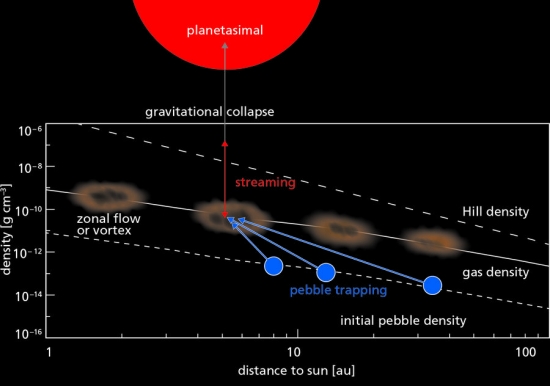 Image: The solar primordial nebula of gas and dust surrounds the sun in the form of a flat disk. In it are vortices in which the small pebbles accumulate. These pebbles can grow up to asteroid size by gravitational collapse, if this is not hindered by turbulent diffusion. Hubert Klahr, Andreas Schreiber, MPIA / MPIA Graphics Department, Judith Neidel.

So on the one hand, turbulence helps create the pebble clusters that can aggregate into larger objects, but to grow larger still, such clouds need to reach a certain mass or they will be dispersed by these instabilities. Klahr and Schreiber’s calculations of the necessary mass show that objects would need to reach 100 kilometers in size to overcome the turbulence pressure for most regions within our own Solar System, matching observation. Thus we have a limiting mass for planetesimal formation.

All of this grows out of simulations and the comparison of their results with telescopic observations of protoplanetary disks around young stars. In the numerical models the authors used, planetesimals grow quickly from the projected pebble traps. Low mass pebble clouds below this turbulence-based Jeans Mass are less likely to grow through accretion, while larger clouds would collapse as they exceeded the critical mass. 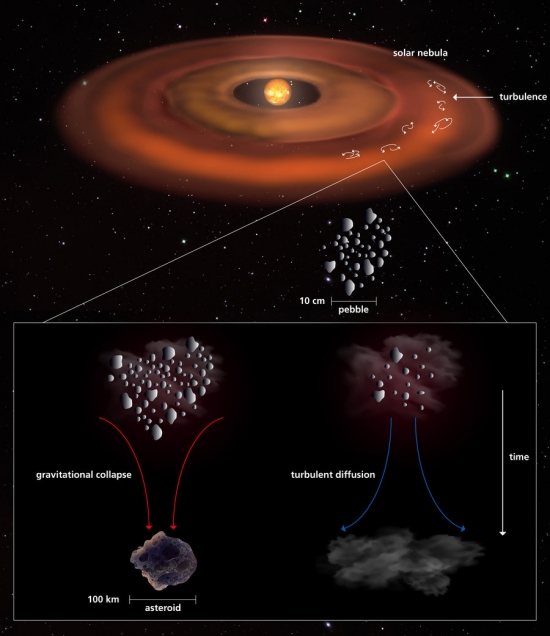 Image: In this schematic the sequence of planetesimal formation starts with particles growing to pebble size. These pebbles then accumulate at the midplane and drift toward the star to get temporarily trapped in a zonal flow or vortex. Here the density of pebbles in the midplane is eventually sufficient to trigger the streaming instability. This instability concentrates and diffuses pebbles likewise, leading to clumps that reach the Hill density at which tidal forces from the star can no longer shear the clumps away. If now also the turbulent diffusion is weak enough to let the pebble cloud collapse, then planetesimal formation will occur. Hubert Klahr, Andreas Schreiber, MPIA / MPIA Graphics Department, Judith Neidel.

Planetesimal size does vary at larger distances, such that objects forming in the outer regions of the disk cluster around 10 kilometers at 100 AU. The authors suggest that the characteristic size of Kuiper Belt Objects will be found to decrease with increasing distance from the Sun, something that future missions into that region can explore. The 100 kilometer diameter seems to hold out to about 60 AU, beyond which smaller objects form from a depleted disk.

New Horizons comes to mind as the only spacecraft to study such an object, the intriguing 486958 Arrokoth, which at 45 AU is the most distant primordial object visited by a space probe. Future missions will give us more information about the size distribution of Kuiper Belt Objects. We can also think about the Lucy mission, whose solar panels we looked at yesterday. The target asteroids orbit at the Jupiter Lagrange points 4 and 5, one group ahead of the planet in its orbit, one group behind. Lucy is to visit six Trojans, objects which evidently migrated from different regions in the Solar System and may include a population of primordial planetesimals.

Klahr and Schreiber have come up with a model that can make predictions about how planetesimals form within the protoplanetary disk and their likely sizes within the disk. Whether these predictions are born out by subsequent observation will help us choose between this new Jeans Mass model for planetesimals and other formation processes, including the possibility that ice is the mechanism allowing pebbles to stick together, or whether aggregates of silicate flakes are the answer. Klahr is not convinced that either of these models can withstand scrutiny:

“Even if collisions were to lead to growth up to 100 km without eventually switching to a gravitational collapse, this method would predict too large a number of asteroids smaller than 100 km. It would also fail to describe the high frequency of binary objects in the Edgeworth-Kuiper belt. Both properties of our Solar System are easily reconcilable with the gravitational pebble cloud collapse.”

The effects of turbulence in other stellar systems will likewise rely upon the concentration of mass within the disk, with the ability for larger planetesimals to form decreasing as the gas within the disk is depleted, either by planet formation or by absorption by the host star. If Klahr and Schreiber’s model of planetesimal formation as a function of gas pressure is applicable to what we are seeing in protoplanetary disks around other stars, then it should prove useful for scientists building population synthesis models to incorporate planetesimals into the mix.