Breakthrough Discuss 2021 wraps up today, with presentations on mission concepts to Alpha Centauri, lightsail technologies and fusion propulsion. Of particular interest to me, in light of the magnitude of the problem as it affects the Breakthrough Starshot idea, is a session on the current state of deep space optical communications. This has been a lively and robust meeting — James Cameron’s appearance was particularly engaging, as was the Yuri’s Night panel discussion — and the public is invited to watch again today at https://www.youtube.com/breakthroughprize. Gathering my notes is going to be time-consuming, but many of these presentations will make their way into upcoming discussions on Centauri Dreams. 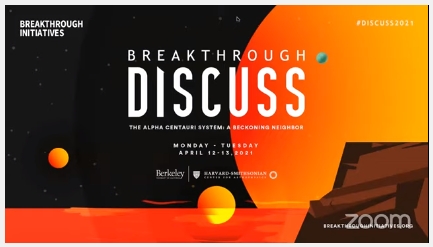 In light of the wide-ranging discussion on the Centauri stars and the challenge they present, it seems appropriate to introduce a quote I just ran into from Alan Lightman’s new book Probable Impossibilities (Pantheon, 2021). This is from a section talking about quantum cosmology, but it resonates with the energies that drive all human discovery:

In the 1940s, the American psychologist Abraham Maslow developed the concept of a hierarchy of human needs, starting with the most primitive and urgent, and ending with the most lofty and advanced for those fortunates who had satisfied the baser needs. At the bottom of the pyramid are physical needs for survival, like food and water. Next up is safety. Higher up is love and belonging, then self-esteem, and finally self-actualization. This highest of Maslow’s proposed needs is the desire to get the most out of ourselves, to be the best we can be. I would suggest adding one more category at the very top of the pyramid, even above self-actualization: imagination and exploration. The need to imagine new possibilities, the need to reach out beyond ourselves and understand the world around us. Wasn’t that need part of what propelled Marco Polo and Vasco da Gama and Einstein? Not only to help ourselves with physical survival or personal relationships or self-discovery, but to know and comprehend this strange cosmos we find ourselves in. The need to explore the really big questions asked by the quantum cosmologists. How did it all begin? Far beyond our own lives, far beyond our community or our nation or planet Earth or even our solar system. How did the universe begin? It is a luxury to be able to ask such questions. It is also a human necessity.