I’ve been wanting to explore some of the observing campaigns for the Alpha Centauri system — their approach, design and early results — and we’ll start that early next week. But let’s home in first on an event within that system, a flare from Proxima Centauri that is fully 100 times more powerful than any flare ever detected from our own star. That Proxima was capable of major flares was already known in 2018 when, according to data from the Atacama Large Millimeter Array (ALMA), an earlier flare at millimeter wavelengths (233 GHz) was detected.

It was an interesting moment, captured in a paper on the work in Astrophysical Journal Letters (citation below). Lead author Meredith MacGregor, an assistant professor at the Center for Astrophysics and Space Astronomy (CASA) and Department of Astrophysical and Planetary Sciences (APS) at the University of Colorado Boulder, also found it provocative. “We had never seen an M dwarf flare at millimeter wavelengths before 2018, so it was not known whether there was corresponding emission at other wavelengths,” says the astronomer.

That led MacGregor to initiate a 40 hour observing campaign over the course of several months in 2019, this one involving nine instruments at various wavelengths, both on the ground and in space. The attention quickly paid off. In May of that year, five of the instruments detected a seven-second event, a flare that surged in both ultraviolet wavelengths (Hubble) and millimeter wavelengths (ALMA) and, according to MacGregor, brightened the star by a factor of 14,000 in the ultraviolet. No flare around a star other than the Sun has ever been observed across such a wide range of wavelengths. The effects near Proxima should be egregious. Adds MacGregor:

“Proxima Centauri’s planets are getting hit by something like this not once in a century, but at least once a day, if not several times a day. If there was life on the planet nearest to Proxima Centauri, it would have to look very different than anything on Earth. A human being on this planet would have a bad time.” 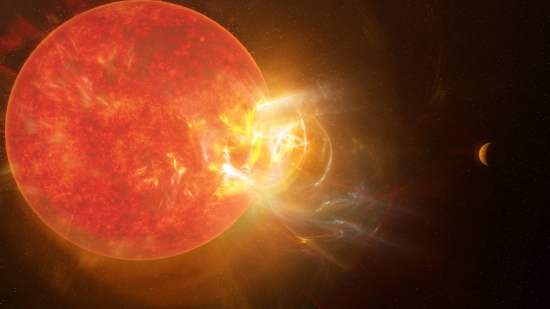 This was the largest ultraviolet flare ever detected from Proxima, a red dwarf and thus representative of the most common stellar type in the galaxy. It’s widely understood that these are highly active stars, so that protective mechanisms during flare activity would have to evolve for life to survive. Evgenya Shkolnik (Arizona State University) notes the importance of working across wavelengths as we try to understand the nature of UV flaring in this environment:

“This research is a benchmark of how best to study flares from many angles. It reminds me of the old parable about the blind men and an elephant, where different people observe small parts of the elephant and conclude that one part is a snake, another a wall, another a tree. Only when they look at all the angles together, do they finally understand it is an elephant. This multiwavelength flare from Proxima Centauri is our first snapshot of the whole elephant.” 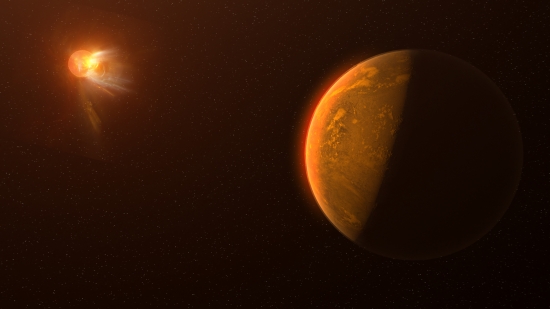 Image: Artist’s conception of a violent stellar flare erupting on neighboring star, Proxima Centauri, from the viewpoint of Proxima Centauri b. The flare is the most powerful ever recorded from the star, and is giving scientists insight into the hunt for life on planets in M dwarf star systems, many of which have unusually lively stars. Credit: S. Dagnello, NRAO/AUI/NSF.

The huge surge in ultraviolet and millimeter radiation marks a kind of activity that could strip planetary atmospheres as well as exposing surface life to dangerous levels of flux. Numerous other flares were detected during the course of the 40 hours of observation, but none so powerful as this. There is conceivably a driver for evolution here as well, with radiation enabling chemical reactions that may eventually become the precursors for life. Untangling these contradictory threads will require continued focus on flare activity and its effects.

Proxima Cen is a unique target given that it hosts a planet in the habitable zone but also produces anomalously powerful flares for its old age. Can a planet truly be habitable in this environment? It is clear that necessary pieces are missing from our current understanding of M dwarf flares in order to answer that question. We expect to learn much more as we synthesize the available data from this project and from future flare campaigns. This paper presents the results from just a few minutes of the available data. Many other flaring events are detected simultaneously across multiple facilities (including ALMA and HST) during the full 40-hour campaign. If the correlation between FUV [far ultraviolet] and millimeter flaring emission holds, there is potential for future all-sky millimeter surveys (e.g., the Atacama Cosmology Telescope, Naess et al. 2020) to be able to provide constraints on the high-energy radiation environment of exoplanet host stars and inform discussion of planetary habitability.