At some point, and probably soon, we’re going to be able to identify planets around Alpha Centauri A and B, assuming they are there and of a size sufficient for our methods. We may even be able to image one. Already we have an extremely tentative candidate around Alpha Centauri A — I hesitate even to call it a candidate, because this work is so preliminary — which could be a ‘warm Neptune’ at about 1 AU. One of the pleasures of the recent Breakthrough Discuss meeting was to hear film director James Cameron on the matter. Cameron, after all, gave us Avatar, where a habitable moon around a gas giant in this system plays the key role.

Despite his frequent protestations that he is not a scientist, Cameron was compelling. He’s obviously well-enough versed in the science to know the terminology and the issues involved in the ongoing deep dive into the Alpha Centauri system, and he’s done wonders in fixing the public’s attention not only on its possibilities but also on presenting a starship concept that, using hybrid propulsion methods, makes a bid for most realistic starship ever in film.

I imagine Kevin Wagner thinks about the Avatar scenario now and again, given that his work on Centauri A has turned up the observation he refers to as C1. Let’s put it in context (and I’ll also send you to Imaging Alpha Centauri’s Habitable Zones, which ran here in February), delighting in the fact that we have more than one habitable zone to talk about.

Wagner (University of Arizona Steward Observatory) and team run NEAR (New Earths in the Alpha Centauri Region), which thus far has been a full-on 100-hour attempt to look into the habitable zones of Centauri A and B. It’s fascinating to realize that these stars are close enough to us that with technology like Hubble, we can actually observe the habitable zones, for these are at separations we can see, at about 1 arcsecond, which is resolvable with large telescopes. Think Sagan’s ‘pale blue dot’ when you imagine the ultimate goal of actually imaging an Earth-like world, although it will take future instrumentation to get us to that level of sensitivity. 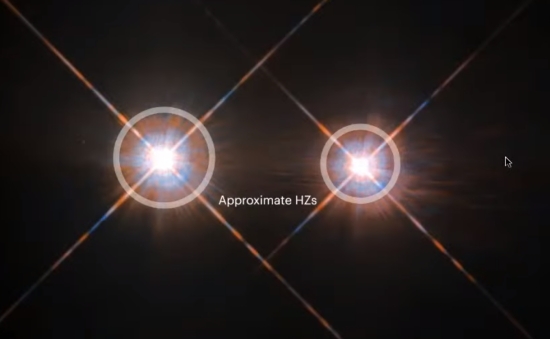 Image: This is a familiar image from Hubble showing Centauri A at left and B on the right. Kevin Wagner superimposed the circles showing the size of the habitable zones. The image was captured by the Wide-Field and Planetary Camera 2 (WFPC2), and is drawn from observations in the optical and near-infrared. Credit: Kevin Wagner/ESA/NASA.

NEAR, whose first 100-hour run is complete, used an adaptive secondary telescope mirror working in combination with light-blocking and masking technologies in the mid-infrared to suppress light from each of the binaries in sequence. The NEAR equipment is mounted on the Very Large Telescope’s Unit Telescope 4 in Chile, and the key, according to Wagner, is the deformable secondary mirror, which maximizes adaptive optics without adding warm optics downstream in a tertiary mirror that would degrade the infrared signal. About 1600 magnetic actuators zone out atmospheric distortion even as the coronograph nulls out star light.

Imaging something on the order of a pale blue dot around another star is quite a goal. We’ve only imaged a dozen or so exoplanets thus far, and all of these have been young and massive gas giants that still radiate brightly, no more than tens of millions of years old. Mature planets like those in our own Solar System are much cooler, and if we are after a planet like the Earth, we have to look in areas where the infrared signal is swamped by our own atmosphere. Adds Wagner:

“The earth is a 300 K black body. Here the primary radiation is at 10 microns, which is where we have to look at more mature exoplanets. And the problem is that the atmosphere of our own planet is what we have to look through, and it also radiates at about 10 microns. The sky, the telescope, the camera, everything is glowing at us.”

I ran the figure below in February, but I want to introduce it again, as it shows not only the C1 observation but also, on the left, the systematic artifacts that have to be removed to come up with what the astronomers hope is a clean image. Remember, we are in early days here, and when discussing C1 as a possible planet, we have to keep in mind that other explanations are possible, including distortion in a not yet recognized effect within the equipment itself.

Image: This is Figure 2 from the paper. Caption: a high-pass filtered image without PSF subtraction or artifact removal. The α Centauri B on-coronagraph images have been subtracted from the α Centauri A on-coronagraph images, resulting in a central residual and two off-axis PSFs to the SE and NW of α Centauri A and B, respectively. Systematic artifacts labeled 1–3 correspond to detector persistence from α Centauri A, α Centauri B, and an optical ghost of α Centauri A. b Zoom-in on the inner regions following artifact removal and PSF subtraction. Regions impacted by detector persistence are masked for clarity. The approximate inner edge of the habitable zone of α Centauri A13 is indicated by the dashed circle. A candidate detection is labeled as ‘C1’. Credit: Wagner et al.

The C1 candidate looks, says Wagner, like what the team’s simulated planetary sources look like, but it could also represent, in addition to a systematic error, dust in the habitable zone, bearing in mind that while the Sun has its own zodiacal light from such dust, the Alpha Centauri system is known to have 50 times more dust. We could be looking, in other words, at dust that is off-center simply because of the orbital perturbations within the binary. “We can’t attribute this to any of the known systematics,” says Wagner, “but we don’t know all the systematics in this new system.”

What’s truly newsworthy in the NEAR work is the sensitivity of the dataset, which demonstrates that a habitable zone planet somewhere between Neptune and Saturn in size is detectable around the Alpha Centauri stars. NEAR is, in other words, sensitive to planets smaller than Jupiter at about 1 AU, and thus we can expect further work to find out whether C1 can be verified as a planet. This could be done through imaging using the James Webb Space Telescope, or through another observing run with NEAR, or via astrometry (about which more in a day or so) or even time-tested radial velocity using the hugely sensitive ESPRESSO.

The current limit on radial velocity detection around Alpha Centauri is on the order of 50 Earth masses in the habitable zone, Wagner added. NEAR itself is not currently in operation but could be reinstalled at UT-4 on the VLT, and of course on top of the other options, we have the next generation of ground-based telescopes coming, extremely large instruments that could accomplish within a single hour what it took the NEAR instrumentation 100 hours to do.

NEAR has demonstrated a technology, then, that is apparently capable of imaging mature Neptune-class planets in this system. Ramp its sensitivity up four times and we get to ‘super-Earth’ detection capability. We’re not yet at Earth-like planet imaging, but within decades, the ELTs should make it possible. We can consider NEAR a pathfinder experiment that has demonstrated the limits of the possible and shown us the way forward as, step by step, Alpha Centauri yields its secrets.

Next post: Closing in on Centauri A and B with Astrometry