Closing in on Centauri A and B with Astrometry

When it comes to finding planets around Centauri A and B, the method that most intrigues me is astrometry. At the recent Breakthrough Discuss sessions, Rachel Akeson (Caltech/IPAC) made the case for using the technique with data from the Atacama Large Millimeter Array (ALMA). My interest is piqued by the fact that so few of the more than 4300 known exoplanets have been discovered using astrometry, although astronomers were able in 2002 to characterize the previously known Gliese 876 using the method. Before that, numerous reported detections of planets around other stars, some going back to the 18th Century, have proven to be incorrect.

But we’re entering a new era. ESA’s Gaia mission, launched in 2013, is likely to return a large horde of planets using astrometry as it creates a three-dimensional map of star movement in the Milky Way. Dr. Akeson’s case for using ALMA to make detections on the ground is robust, despite the challenges the method presents. She points out that if we viewed the Solar System from a distance of 10 parsecs, Jupiter’s impact on the movement of our star would be 500 microarcseconds (µas), which works out to 1.4 X 10-7 degrees. Keep that figure in mind.

Astrometry is about measuring the movement of a star’s position on the sky, and it has been put to good use for a long time in identifying binary star systems. As the star’s position changes over time, the gravitational pull of an orbiting planet should likewise be revealed. This is something like the well established radial velocity technique for planet detection, but it operates within the plane of the sky instead of along the line of sight (radial velocity measures the Doppler shift in the star’s light as it is pulled alternately toward and then away from Earth along the line of sight). The beauty of astrometry is that it complements radial velocity by being best suited to planets with a wide separation from their star. 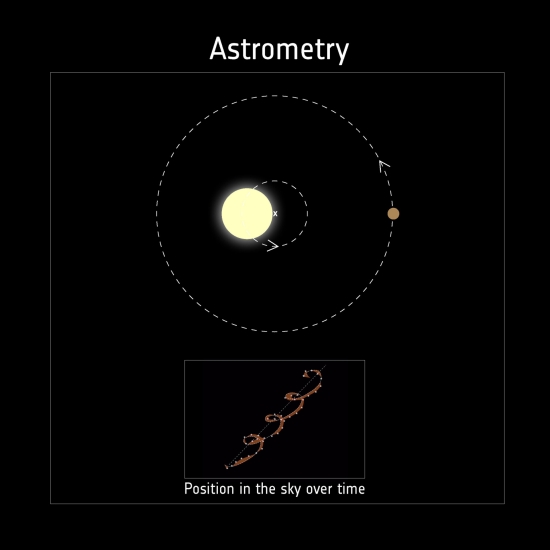 Image: Astrometry is the method that detects the motion of a star by making precise measurements of its position on the sky. This technique can also be used to identify planets around a star by measuring tiny changes in the star’s position as it wobbles around the center of mass of the planetary system. Credit: ESA.

Back to Gaia for a moment. It’s a mission that has given astrometry a dazzling upgrade, offering 10 to 20 µas performance for a large sample of observed stars, making the upcoming release of its exoplanet catalog an event that should vastly enlarge our statistical understanding of planetary systems. Remember that figure from Jupiter as seen from 10 parsecs — the movement of the Sun is 500 µas. Gaia should identify tens of thousands of exoplanets out to 1600 light years from the Sun, all of this by tracking minute changes in the stars’ position. But for the nearest star system, Gaia is far less effective because of Alpha Centauri’s brightness.

Enter ALMA. 5000 meters up on the Chajnantor Plateau in Chile’s Atacama desert, the site offers 66 antennas with baseline lengths of 150 meters to 16 kilometers. At the longest baseline, the resolution is 12 milliarcseconds (one thousandth of an arcsecond, abbreviated mas). We’ve looked often in these pages at ALMA studies of protoplanetary disks (Akeson refers to the famous image of HL Tau, shown below, with the roughly one million year old disk dividing into clearly visible rings and gaps).

With ALMA, the proximity of Centauri A and B becomes an advantage. The relative positions of the two stars can be measured, as opposed to having to compare them to reference stars in other fields, meaning that the precision of the measurement is greatly increased. To be sure, this remains a tough measurement — in 2015 observations, position uncertainties were in the range of 10 milliarcseconds, a figure that needs to be reduced to hundred of microarcseconds.

Can ALMA handle this level of precision? Akeson’s team requested three pairs of observations in 2018-2019, with two achieved and the third incomplete, a dataset that will be complemented with future observations to identify deviations in the orbital motions of these stars. The need for high resolution has meant that only a few of the configurations, using the longest baselines between ALMA antennas, can be used, which puts limits on the observing time available. 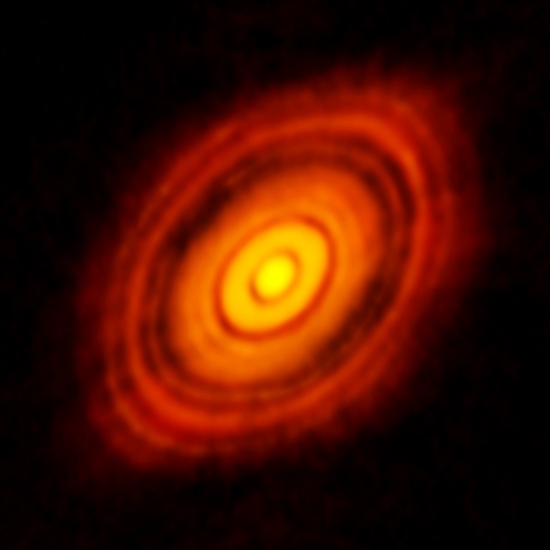 Image: ALMA image of the protoplanetary disc around HL Tauri – This is the sharpest image ever taken by ALMA — sharper than is routinely achieved in visible light with the NASA/ESA Hubble Space Telescope. It shows the protoplanetary disc surrounding the young star HL Tauri. These new ALMA observations reveal substructures within the disc that have never been seen before and even show the possible positions of planets forming in the dark patches within the system. Credit: ALMA (ESO/NAOJ/NRAO.

The highest resolution the team has yet achieved is in the August 2019 dataset. Here the absolute position of the stars was limited to 3 milliarcseconds (atmospheric noise is a factor here), and their relative separation showed uncertainties of 300 µas. Out of all this the plan is to use ALMA’s astrometrical data along with archival data (this includes radial velocity) to tighten up constraints on the orbits of both stars. The data allowed the team to improve our calibration of the stars’ masses by 2-3 percent. From a paper (citation below) describing the ALMA work, illustrating how data from numerous sources play into this effort:

But I also noticed, from the same paper, this intriguing bit about Proxima Centauri, whose status as bound or unbound to the central binary has remained problematic. The ALMA work seems to resolve the issue:

The significance of the gravitational link between AB and Proxima has therefore increased over the last three years from 4.4σ in (Kervella et al. 2017b), to 5.5σ in Kervella et al. (2019) to 8.3σ in the present work (< 10−15 false alarm probability). Proxima becomes a yet more valuable check on lower main sequence stellar modeling…

Our accurate determination of the α Cen AB system parallax, RV [radial velocity], and proper motion, when compared to those values for Proxima Centauri, confirms that the three stars constitute a bound system.

All this is obviously painstaking work, and in the way of astronomical observation, it allowed the scientists to now use the tightened orbital information as a baseline for their continued search for deviations caused by planets. Akeson argues that the highest resolution configuration of the ALMA antennas will allow a resolution 2.5 times higher than the August 2019 data, which would take ALMA into the 100 microarcsecond range. As the paper notes:

Our estimates of ALMA’s relative astrometric precision suggest that we will ultimately be sensitive to planets of a few 10s of Earth mass in orbits from 1-3 AU, where stable orbits are thought to exist.

We may be closing in on a potential planet like Kevin Wagner’s tentatively identified C1. Here we can see the synergy between detection methods, with direct imaging (the subject of multiple proposals) exploring the same space.

But both these methods play off radial velocity studies as well. Remember that astrometric data is best suited to planets in wider orbits than radial velocity. While the latter continue and the ALMA work pushes ahead, we have imaging possibilities through the James Webb Space Telescope to add to the mix. The observational ring around Centauri A and B, then, is tightening as astrometry yields more refined orbital parameters for both stars. We can hope for exoplanet discovery here that can be confirmed in short order through multiple approaches.

For more on the ALMA work on Alpha Centauri, see Akeson et al., “Precision Millimeter Astrometry of the α Centauri AB System,” in process at the Astrophysical Journal (preprint).