Why the renewed focus on astrometry when it comes to Alpha Centauri (a theme we saw as well in the previous post on ALMA observations from the surface)? One problem we face with other detection methods is simply statistical: We can study planets, as via the Kepler mission, by their transits, but if we want to know about specific stars that are near us, we can’t assume a lucky alignment.

Radial velocity requires no transits, but has yet to be pushed to the level of detecting Earth-mass planets at habitable-zone distances from stars like our own. This is why imaging is now very much in the mix, as is astrometry, and getting the latter into space in a dedicated mission has occupied a team at the University of Sydney led by Peter Tuthill for a number of years — I remember hearing Tuthill describe the technology at Breakthrough Discuss in 2016.

Out of this effort we get a concept called TOLIMAN, a space telescope that draws its title from Alpha Centauri B, whose medieval name in Arabic, so I’m told, was al-Zulmān. [Addendum: This is mistaken, as reader Joy Sutton notes in the comments. It wouldn’t be until well after the medieval period — in 1689 — that the binary nature of Centauri A and B was discovered by Jesuit missionary and astronomer Jean Richaud. The name al-Zulmān seems to be associated with an asterism that included Alpha Centauri, though I haven’t been able to track down anything more about it. Will do some further digging.]

The name is now fixed — a list of IAU-approved star names as of January 1st, 2021 shows Alpha Centauri A as Rigel Kentaurus and Centauri B as Toliman, so what goes around comes around. Centauri C’s name, according to the IAU, remains the familiar Proxima Centauri. 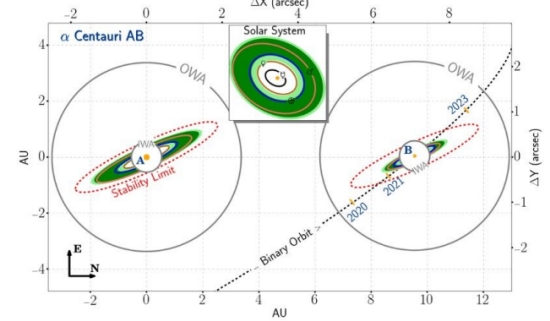 Image: This is Figure 5 from an online description of this work. Caption: Habitable zones of Alpha Cen A (left) and B (right) in green, along with dynamical stability boundary (red dashed line), 0.4” and 2.5” inner and outer working angles (IWA and OWA) of a small coronagraphic mission. The inset shows the Solar System to scale. Planetary systems of Alpha Cen A & B are assumed to be in the plane of the binary (the likeliest scenario) and orbits of hypothetical Venus-like, Earth-like, and Mars-like planets are shown. Credit: Tuthill et al.

The TOLIMAN mission is designed to use astrometry by means of a diffractive pupil aperture mask that in effect leverages the distortions of the optical system to produce a ‘ruler’ that can detect the changes in position that flag an Earth-mass planet in the Alpha Centauri system. Tuthill’s colleague Céline Bœhm presented the work at the recent Breakthrough Discuss online.

In TOLIMAN, we actually have an acronym — Telescope for Orbit Locus Interferometric Monitoring of our Astronomical Neighborhood — but at least it’s one that’s applicable to the system under study. According to Boehm, there are certain advantages to working with nearby binaries. Astrometry normally uses field stars (stars in the same field as the object being studied) as references, making larger apertures an essential given the faintness of many of these reference points and their distance from the target star, and requiring a wide field of view.

But a bright binary companion 4 arcseconds away, as we find at Alpha Centauri, resolves the problem. Now a small aperture telescope can come into play because we have no need for field stars. The TOLIMAN concept puts a diffractive ‘pupil’ in front of the optics that spreads the starlight out over many pixels, a diffraction caused by features embedded in the pupil. Here stability is at play: We’re trying to eliminate minute imperfections and mechanical drifts in the optical surfaces that can create instabilities that compromise the underlying signal. The pupil mask prevents the detector from becoming saturated and reduces noise levels in the signal.

The astrometric ‘ruler’ used to measure the star’s position is thus created by the light of the stars themselves. The diffraction pattern cast by the pupil positions a reference grid onto the detector plane, which registers precise stellar locations. As a 2018 paper on the mission puts it: “Drifts in the optical system therefore cause identical displacements of both the object and the ruler being used to measure it, and so the data are immune to a large class of errors that beset other precision astrometric experiments.”

Narrow-angle astrometry, where the reference star is extremely close, makes for greater precision than wide-angle astrometry, and angular deviations on the sky are larger. Boehm makes the case that TOLIMAN’s diffractive pupil technology should be effective at finding Earth analogs around Centauri A and B, with a more advanced mission (TOLIMAN+) capable of finding rocky worlds around secondary targets 61 Cygni and 70 Ophiuchi.

Unlike both transit and radial velocity methods, the signal generated by a potential planet increases with the separation of planet and star, which makes astrometry an ideal probe for habitable zones. We should also throw into the mix the fact that radial velocity detections vary depending on the spectral type of the star, which is why we have had pronounced radial velocity success at Proxima Centauri and Barnard’s Star, but face a steeper climb in doing the same around G- and K-class stars. Astrometry becomes more sensitive with rising luminosity of the host star even as we wrestle with the tiny distortions that a planet like this would produce.

Both HIPPARCOS and Gaia have shown what can be accomplished by moving astrometry into space, and we saw yesterday that Gaia is likely to produce gas giants in the thousands, but the idea behind TOLIMAN is that astrometry now needs a dedicated mission to get down to rocky planets in temperate orbits. Tuthill and team have pointed to Alpha Centauri as an ideal target, one that would yield signals potentially 2 to 10 times stronger than the next best systems for study.

The researchers believe their work yields the optical innovations needed to acquire astrometric data on habitable-zone rocky planets with a telescope with an aperture of 10 cm. To explore the concept further, a CubeSat mission called TinyTol is scheduled to fly later this year, serving as a pathfinder to demonstrate astrometric detection. The full-scale TOLIMAN mission is funded and under development, with launch planned for a 3 year mission in 2023. TOLIMAN+ is envisioned as a 0.5-meter aperture telescope capable of sub-Earth class detections at Alpha Centauri and Earth-mass planets at both 61 Cygni and 70 Ophiuchi.

The most recent paper I know of on this work is Tuthill et al. “The TOLIMAN space telescope: discovering exoplanets in the solar neighbourhood,” SPIE Proceedings Vol. 11446 (13 December 2020). Abstract.

Next post: An Exoplanet Model for the Carbon Cycle

Previous post: Closing in on Centauri A and B with Astrometry