An Exoplanet Model for the Carbon Cycle

Earth’s long-term carbon cycle is significant for life because it keeps carbon in transition, rather than allowing it to accumulate in its entirety in the atmosphere, or become completely absorbed in carbonate rocks. The feedback mechanism works over geological timescales to allow stable temperatures as CO2 cycles between Earth’s mantle and the surface. As a result, we have carbon everywhere. 65,500 billion metric tons stored in rock complements the carbon found in the atmosphere and the oceans, as well as in surface features including vegetation and soil. It’s a long-term cycle that can vary in the short term but be stabilizing over geological time-frames.

The Sun has increased in luminosity substantially since Earth’s formation, but the long-term carbon cycle is thought to be the key to maintaining temperatures on the surface suitable for life. Does it exist on other planets? It’s an open question, as astronomer Mark Oosterloo (University of Groningen, The Netherlands) points out:

“We don’t know if there are any other planets at all with plate tectonics and a carbon cycle. In our solar system, the Earth is the only planet where we have found a carbon cycle. We hope that our model can contribute to the discovery of an exoplanet with a carbon cycle, and therefore, possibly life.” 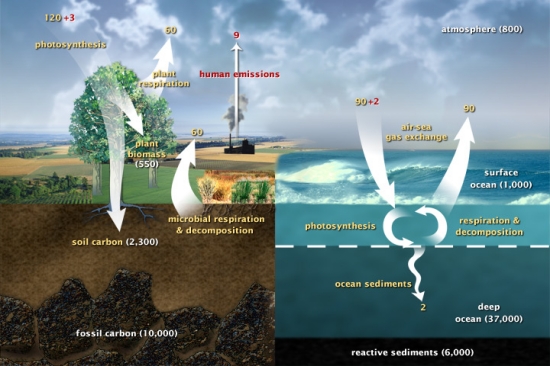 Oosterloo is lead author of a paper that has just appeared in Astronomy & Astrophysics. Working with researchers at SRON (Netherlands Institute for Space Research) and Vrije Universiteit Amsterdam, the scientist has developed a model designed to analyze whether or not a carbon cycle can emerge on an exoplanet, varying its mass, core size and the amount of radioactive isotopes it contains.

Quite a lot goes into determining how the feedback mechanisms of a carbon cycle work, enough so that our problems in observing exoplanets swim into sharp relief — we’re usually limited to mass and radius measurements along with a degree of atmosphere characterization on those worlds where we can deploy methods like transmission spectroscopy, viewing the light of a star as it is filtered by a planet’s atmosphere.

But we’re learning about the composition of the planets slowly but surely. The authors cite Kepler-452b, a world whose interior has been shown to have a larger fraction of rock than Earth, which would affect the chemical structure of the interior. That in turn affects the amount and type of volatiles outgassed into the atmosphere.

To go beyond this, the authors investigate how planetary interiors of different composition affect long-term carbon cycling as enabled by plate tectonics. This involves not just the relative abundances of radioactive isotopes, the size of the planet’s core and its mass, but also into the evolution of CO2 in the atmosphere. The team’s two-component model, connecting mantle convection to the emergence of a long-term carbon cycle, has plate tectonics at its center — in fact, the paper refers to mean plate speed as “the key coupling variable between the two models.”

Among the findings thus far is that the cooling of a planet’s mantle (and its effect on the tectonic plate speed) produces gradually declining CO2 levels over time as outgassing slowly decreases. And note the effects of varying a planet’s internal heating:

A long-term carbon cycle driven by plate tectonics could operate efficiently on planets with amounts of radiogenic heating in their mantles different from Earth. However, planets with their mantles enriched in radioactive isotopes with respect to Earth, may favor the development of warmer climates resulting from a more CO2 rich atmosphere. This is in particular the case for a planet with a higher thorium abundance. In addition, the carbon cycle operates more efficiently on planets rich in radioactive isotopes, motivating the characterization of planetary systems around stars whose atmospheres are rich in thorium or uranium.

A long-term carbon cycle regulated by plate tectonics, say the authors, may not operate on planets with a core mass fraction greater than 0.8 (for reference, Earth’s core mass fraction is 0.32 of the planetary mass; that of Mars is 0.24). Here the value of mass/radius measurements on Earth-sized planets becomes apparent. And it was surprising to me to learn that the effects of carbon cycling can be felt relatively quickly. In the authors’ models, equilibrium is achieved between 100 and 200 million years. In other words, if plate tectonics is operational, an exoplanet does not have to be old to have its atmosphere affected by a long-term carbon cycle.

Image: An artist’s impression of an Earth-like exoplanet. Can we develop the tools to establish the presence of a carbon cycle on such worlds? Credit: NASA.

The significance of this paper in my estimation is that it shows that carbon cycling can work as a regulator of climate for planets with a wide range of masses, core sizes and radioactive isotope abundances. As noted above, there is more efficient carbon cycling on planets with a high level of thorium or uranium in their mantles. That would imply that mapping these elements as found in their host stars would be a useful observational tool in exploring potential habitability of planets in a given stellar system.

The paper is Oosterloo, et al., “The role of planetary interior in the long-term evolution of atmospheric CO2 on Earth-like exoplanets,” Astronomy & Astrophysics Vol. 649, A15 (3 May, 2021). Abstract / Preprint.