Exoplanet Geology: A Clue to Habitability?

Because we’ve just looked at how a carbon cycle like Earth’s may play out to allow habitability on other worlds, today’s paper seems a natural segue. It involves geology and planet formation, though here we’re less concerned with plate tectonics and feedback mechanisms than the composition of a planet’s mantle. At the University of British Columbia – Okanagan, Brendan Dyck argues that the presence of iron is more important than a planet’s location in the habitable zone in predicting habitability.

We learn that planetary mantles become increasingly iron-rich with proximity to the snow-line. In the Solar System, Mercury, Earth and Mars show silicate-mantle iron content that increases with distance from the Sun. Each planet had different proportions of iron entering its core during the planet formation period. The differences between them are the result of how much of their iron is contained in the mantle versus the core, for each should have the same proportion of iron as the star they orbit.

Core mass fraction (CMF) is a key player in this paper, defined as the extent of planetary core formation as a function of total planet mass. We start with similar precursor materials, but variations in the core mass fraction point to the differences in the silicate mantle and the surface crusts that should result on each rocky world. CMF itself “reflects the oxidation gradient present in the proto-planetary disc and the increasing contribution of oxidized, outer solar system material to planetary feedstocks.” We can use CMF as a marker for how a given planet will evolve.

Can we expect a similar growth in iron content in the mantles of planets around other stars? Evidently so. From the paper:

Oxidation gradients have been observed around other main sequence stars… and similar gradients in mantle iron contents are thus expected in other planetary systems possessing rocky differentiated planets… Consequently, even if each rocky body in a multi-planetary system forms from similar precursor material, variations in their core mass fraction will generate silicate mantles and derivative surface crusts that exhibit distinct compositional and petrophysical differences. Hence, variations in CMF may have a disproportionate role in determining a planet’s geological evolution and its future habitability. 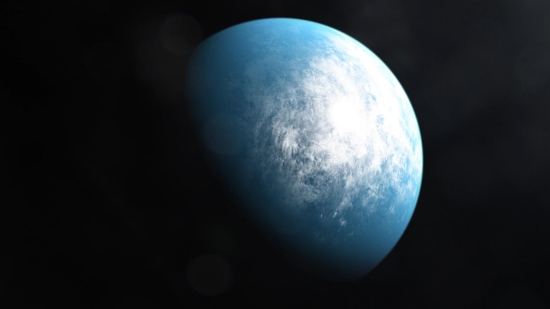 To explore how core formation influences both the thickness and composition of a planet’s crust, Dyck and team developed computer models simulating mantle and crust production in planets through a range of core mass fractions. As we saw on Tuesday, Earth’s CMF is 0.32, while Mars’ is 0.24. Dyck’s models investigate core mass fractions between 0.34 and 0.16.

So here we have some interesting observables to juggle. The modeling shows that a larger core points to thinner crusts; smaller cores produce thicker crusts that are more iron-rich, along the model of Mars. And now we circle back to plate tectonics, which is dependent upon the thickness of the planetary crust, remembering that plate tectonics is thought to be critical for a carbon cycle that can support life. The conclusion is apparent: We may well find numerous planets located within the habitable zone whose early formation history makes them unable to support water on the surface.

“Our findings show that if we know the amount of iron present in a planet’s mantle, we can predict how thick its crust will be and, in turn, whether liquid water and an atmosphere may be present. It’s a more precise way of identifying potential new Earth-like worlds than relying on their position in the habitable zone alone.”

These conclusions again point to the critical nature of chemical composition in stellar systems, which is a key area of research made feasible by new instruments like the James Webb Space Telescope. Assuming a (fingers crossed) safe launch and deployment, JWST should be able to measure the amount of iron present in exoplanetary systems, which will offer clues as to whether life is possible there.

The paper is Dyck et al., “The effect of core formation on surface composition and planetary habitability,” in process at Astrophysical Journal Letters (preprint).

Next post: A Bright Young World in the Ultraviolet

Previous post: An Exoplanet Model for the Carbon Cycle