A Bright Young World in the Ultraviolet

In the ranks of exoplanets we can actually see, we can include the gas giant PDS 70b, a young world orbiting the K-dwarf PDS 70. Bear in mind that of the more than 4,000 exoplanets thus far catalogued, only about 15 have been directly imaged, an indication of how tricky this work is and how far we have to go as we contemplate imaging Earth-size planets and taking spectroscopic measurements of their atmospheres. The most recent PDS 70b work was performed with the Hubble instrument, and is to my knowledge the first direct detection of an exoplanet in the ultraviolet.

About 370 light years from Earth, PDS 70 (also known as V1032 Centauri) is a T Tauri star, a class of variables less than 10 million years old; this one appears to be no more than 5 million years old, and its largest planet is still in the process of building mass. The star is known to host at least two actively forming planets within its circumstellar disk of gas and dust, although only the larger is apparent in these UV observations. 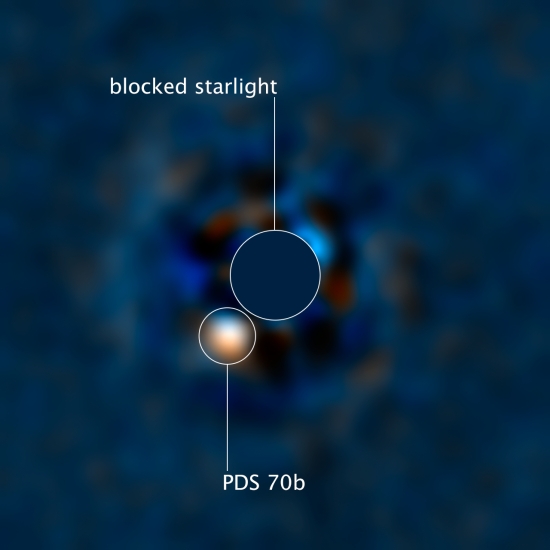 Image: Hubble observations pinpoint planet PDS 70b. A coronagraph on Hubble’s camera blocks out the glare of the central star for the planet to be directly observed. Though over 4,000 exoplanets have been cataloged so far, only about 15 have been directly imaged to date by telescopes. The team’s fresh technique for using Hubble to directly image this planet paves a new route for further exoplanet research, especially during a planet’s formative years. Credit: Joseph DePasquale (STScI).

What we’re seeing here is planet formation as flagged by the radiation produced by hot gas falling onto the planet, allowing estimates of how fast PDS 70b is gaining mass. In its short (in astronomical terms) history, the world has grown to roughly 5 Jupiter masses. The accretion rate is now dwindling, and the team studying the planet, led by Yifan Zhou (University of Texas at Austin), describes it as being at the end of the formation process.

Two disks are actually at play here, the first being the circumstellar disk that is supplying growth materials in the form of gas and dust to the entire infant system; the second is the disk around PDS 70b, which is drawing off material from the larger disk, producing hot patches apparent at ultraviolet wavelengths on the forming planet. We can hypothesize that a system of satellites like Jupiter’s could form here as well. 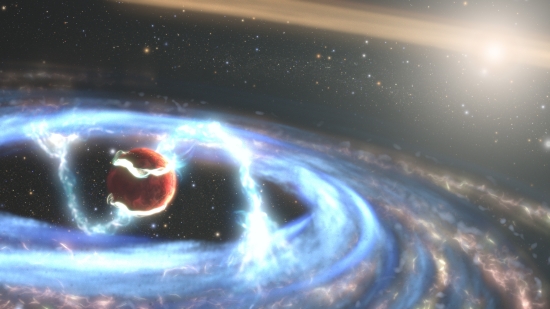 Image: This illustration of the newly forming exoplanet PDS 70b shows how material may be falling onto the giant world as it builds up mass. By employing Hubble’s ultraviolet light (UV) sensitivity, researchers got a unique look at radiation from extremely hot gas falling onto the planet, allowing them to directly measure the planet’s mass growth rate for the first time. The planet PDS 70b is encircled by its own gas-and-dust disk that’s siphoning material from the vastly larger circumstellar disk in this solar system. The researchers hypothesize that magnetic field lines extend from its circumplanetary disk down to the exoplanet’s atmosphere and are funneling material onto the planet’s surface. The illustration shows one possible magnetospheric accretion configuration, but the magnetic field’s detailed geometry requires future work to probe. The remote world has already bulked up to five times the mass of Jupiter over a period of about five million years, but is anticipated to be in the tail end of its formation process. Credit: NASA, ESA, STScI, Joseph Olmsted (STScI).

According to the paper, the luminosity we see in these data is low compared to the mass accretion rate the researchers had expected through their shock modeling, leading to this note at the end of the paper. The hydrogen alpha (Hα) spectral line referenced below is the brightest hydrogen line in the visible spectral range:

So when it comes to probing the accretion of giant planets, we’re making progress, as witness Hubble’s ability to examine ultraviolet emissions from this growing young world. This is crafty work that extends Hubble’s capabilities by a factor of five when it comes to observing a planet close to its star, a tribute to skillful image processing. Co-author Brendan Bowler, a college of Zhou at the University of Texas at Austin, adds:

“Thirty-one years after launch, we’re still finding new ways to use Hubble, Yifan’s observing strategy and post-processing technique will open new windows into studying similar systems, or even the same system, repeatedly with Hubble. With future observations, we could potentially discover when the majority of the gas and dust falls onto their planets and if it does so at a constant rate.” 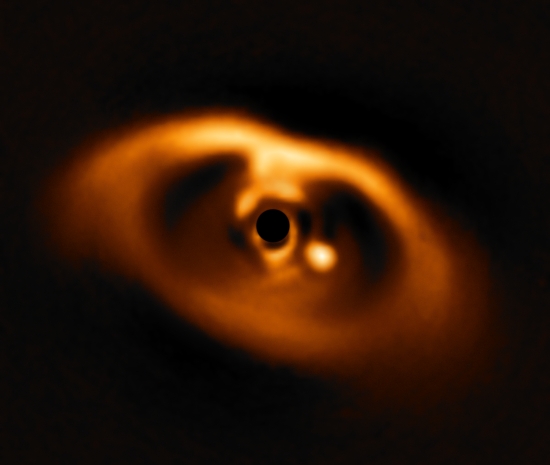 Image: The European Southern Observatory’s Very Large Telescope caught the first clear image of a forming planet, PDS 70b, around a dwarf star in 2018. The planet stands out as a bright point to the right of the center of the image, which is blacked out by the coronagraph mask used to block the light of the central star. Credit: ESO, VLT, André B. Müller (ESO).